Who Is Charles Wright, the New Poet Laureate?

Charles Wright via the Library of Congress
By Lily Rothman

The Library of Congress announced today that Charles Wright will be the next Poet Laureate, kicking off his tenure with a Sept. 25 reading of his work.

James H. Billington, the Librarian of Congress (yes, that’s his real title) praised Wright’s “Southern sensibility” and “allusive expansiveness,” and the last Poet Laureate Natasha Trethewey said that his “belief in [poetry’s] power to sustain us” made him the perfect person for the job.

But most poets aren’t exactly household names — so who exactly is he?

Wright was born in 1935 in Tennessee and served with the U.S. Army, first exploring poetry while stationed in Italy, and was later a professor at the University of Virginia. His influences range from the work of Ezra Pound to that of ancient Chinese poets. In 2011, he told PBS that the content of all of his poems, no matter their precise subject matter, is “language, landscape and the idea of God.” He also noted that his poems have gotten less “loquacious” as he’s gotten older. “I once said if a guy can’t say what he has to say in three lines, he better change his job,” he joked. “I haven’t gotten that far yet, but I’m down to six lines.”

His poetic bona fides are many: 24 poetry collections and two books of essays. A Pulitzer Prize. A National Book Critics Circle Award. A National Book Award. The International Griffin Poetry Prize. A Guggenheim Foundation fellowship. A National Endowment for the Arts fellowship. A term as chancellor of the Academy of American Poets. The Library of Congress’ own award for lifetime achievement in the form. (And lots more.)

But that doesn’t mean he’s totally sure what his new role entails. Reached in Charlottesville by the New York Times, he expressed happy confusion about what it means to be Poet Laureate:

Here’s his answer: though the Library describes the job with big words — he “serves as the nation’s official lightning rod for the poetic impulse of Americans” — in practice the Poet Laureate doesn’t do too much. The Library of Congress is clear that it “keeps to a minimum the specific duties required of the Poet Laureate.” He’ll have to open the “literary season” (that’s the Sept. 25 reading) and close it in the spring; the nation is pretty much Laureate-less each summer. He’ll make suggestions for whom else should be included in the Library’s literary calendar, and the rest is pretty much up to him. Past Poet Laureates — a job called Consultant in Poetry to the Library of Congress until 1986 and, officially, Poet Laureate Consultant in Poetry since then — have done things like launch newspaper columns and organize conferences. In exchange, the Poet Laureate receives a $35,000 stipend.

The reason for keeping the duties minimal is an important one: he needs time to write more poetry. Here, watch Wright read his poem “When the Horses Gallop Away from Us, It’s a Good Thing”: 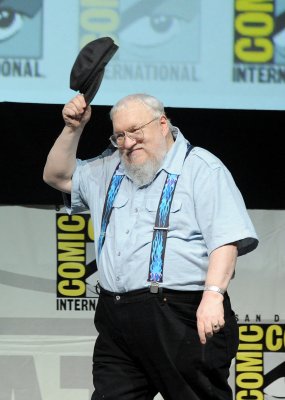 Facebook Employee Gets to Die in Game of Thrones
Next Up: Editor's Pick