The (Slow) Greening of America

Americans who don’t believe in global warming should visit my Miami Beach neighborhood at high tide, when Biscayne Bay surges through our storm drains and swamps our streets. In May, the New York Times ran a photo of sunny-day flooding outside my local Walgreens, above an article headlined, “Miami Finds Itself Ankle-Deep in Climate Change Debate.” Really, the debate should be over. Scientists have already documented 5 in. to 8 in. of sea-level rise around South Florida over the past 50 years. This kind of phenomenon has encouraged President Obama to start emphasizing that climate change is not a someday thing. “This is not some distant problem of the future,” he said recently. “This is a problem that is affecting Americans right now.”

That’s true. But as a new global survey conducted by TIME about attitudes toward energy and conservation illustrates, many Americans don’t believe it. This sets them apart from the people Time surveyed in five other countries. Only 40% of Americans “strongly agreed” that the earth is getting warmer, even though the earth is, in fact, getting warmer; 71% of Indians strongly agreed. Globally, 57% of the 3,505 people surveyed strongly agreed that the polar ice caps are melting because of global warming, including the 39% of Americans who strongly agreed. On almost every question, Americans were the least likely to back the scientific consensus on climate–and among the least likely to support doing anything about it. One out of three Americans wanted their politicians to fight global warming, compared with 3 out of 4 Brazilians.

This may seem odd because, as Obama’s new National Climate Assessment makes clear, the U.S. is already feeling the effects of global warming. The first 13 years of the 21st century were among the 14 hottest on record. California is enduring a historic drought. Wildfires are getting worse throughout the West. And while it’s premature to blame climate change for any particular storm–that stock phrase seemed to appear in every story about Superstorm Sandy–our weird weather trends are consistent with expectations for a warmer world.

Meanwhile, there’s mounting evidence of the viability of clean energy, with wind power often cheaper than coal, solar costs plunging over 80% in five years, energy-efficient lightbulbs taking off and every major automaker offering electric vehicles in the U.S.

But compared with citizens of Germany, South Korea, India, Turkey and Brazil, Americans were among the least likely to turn off the lights when leaving a room or power down their computer at night and by far the least likely to walk or take public transit instead of driving. Americans were also more opposed to carbon taxes, carbon limits and even bike lanes than the rest of the world. They were less concerned than the global average about polluted air, higher sea levels and almost every other problem the pollsters asked about except higher gas prices. (While Americans are somewhat more likely than citizens of other nations to believe that the U.S. could do more to fight global warming, they are by far the least likely to think the U.S. should accept “most of the burden” for reducing emissions.)

Why are we so unenlightened? green issues often take a backseat in tough economic times, but most of the world is enduring much tougher times than we are. Our relative apathy in part reflects our polarized politics. The Republican Party’s rejection of climate science during the Obama era has helped fuel denial among members of its base. In any case, addressing problems like climate change–requiring some perceived short-term sacrifice to avert long-term problems–is not exactly our national comparative advantage.

So Obama’s here-and-now arguments are understandable. But if global warming is our most important problem, it’s not our most imminent one. The real pain–from climate refugees to agricultural depressions–lies in the future. Even low-lying Miami Beach is not Kiribati, the Pacific island nation that’s on the verge of disappearing. We’ve got bigger headaches than the monthly flooding in the nearby Whole Foods parking lot.

If climate action depends on getting Americans outraged about what they can see now, we’re in trouble. There’s not much to see yet. The puddles at Walgreens are not gripping evidence of the need to limit emissions, although the danger of Miami Beach becoming Kiribati in this century ought to be. And while our expressed concern for future generations does not match the rest of the world’s, it does exist. That’s fortunate. Global warming has the potential to singe us, but it could roast our kids and grandkids. If we do nothing until the pain becomes unbearable, we’ll be way too late. 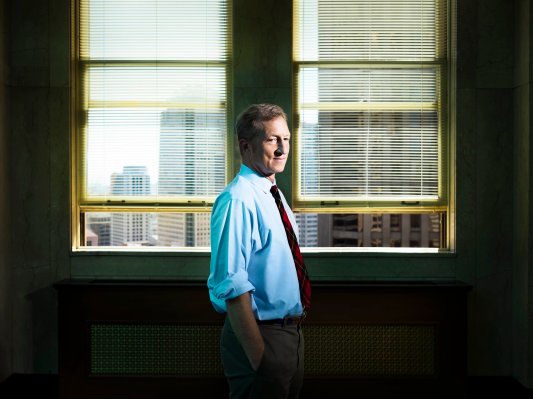