Petro Poroshenko: Man in the Middle

Poroshenko arrives at Ukraine’s parliament for his inauguration on June 7.
Anastasia Sirotkina—Pool/Reuters
By Simon Shuster/Kiev

Petro Poroshenko, the newly elected President of Ukraine, had to control his temper on June 6 when he came face to face with Vladimir Putin. Less than three months had passed since the Russian President had annexed Ukraine’s territorial jewel, the Black Sea peninsula of Crimea. Poroshenko gritted his teeth and told Putin he wanted peace between the two countries, but he couldn’t help confronting Putin over the landgrab. Ukraine, he told the Russian President, would get Crimea back eventually. Poroshenko recounted his meeting with Putin a few days later during an interview with TIME in his office in Kiev. He wouldn’t say how Putin had responded, but he insisted the Russian President’s response was of little importance to him. “To be honest,” he told TIME, “I’m not very interested in what citizen Putin thinks of my state.”

Poroshenko does not, in truth, have that luxury. His meeting with Putin in Normandy during the 70th anniversary of the D-Day invasions followed a three-day marathon of talks with Western leaders, including two days in the company of President Barack Obama. The message he heard from all of them was clear: Russia, the country Poroshenko has publicly called an aggressor, must also be Ukraine’s negotiating partner.

This follows from the hard facts of geography, as Poroshenko grudgingly admits. “Maybe some Ukrainians would like to have Sweden or Canada for a neighbor, but we have Russia,” he said on June 9, sitting in the same ornate room in the presidential headquarters where he had held his first round of talks with Russia’s ambassador to Ukraine the day before. “We can’t talk about a firm sense of security without a dialogue and an understanding with Russia.”

That approach–the only realistic strategy available to Poroshenko as he tries to bring his country back from the brink of catastrophe–has worked for now. Putin’s Crimean conquest has won the Russian President adoration at home; signaling that he’d had his fill for now, Putin ordered his army away from Ukraine’s border in mid-May.

None of that means Russia will leave Ukraine or any of its other neighbors alone. Pro-Russian militants are still fighting Ukrainian troops in eastern Ukraine, with new fighters pouring in from across the border. The Crimean Peninsula is still, in Russia’s eyes, a legal part of Russia. And Putin still has the permission of his legislature to invade Ukraine whenever he sees fit. At any moment, Putin could cripple Ukraine’s already battered economy by hiking fuel prices or blocking the import of Ukrainian goods. But even as he accepts the need to negotiate, Poroshenko has shown that he’s also happy to keep doing battle. His military is continuing its war against pro-Russian separatists in eastern Ukraine.

“It is no longer a question of Ukraine’s security,” he says, insisting that Russia is a threat not only to Ukraine but also to the global balance of power. “I want you to understand that Ukrainian soldiers are fighting today for peace in the region, peace in Europe and peace in the world.”

The Ukrainian military did not wait long after Poroshenko’s election before attacking the rebels with a ferocity it had avoided during the presidential race. Still formally under the command of Poroshenko’s ally, interim President Oleksandr Turchynov, helicopter gunships and planes swept down over the rebel-held airport in the eastern city of Donetsk on May 26, the day after the vote, and by nightfall the local morgues were stacked high with the bodies of militants. It was the bloodiest day of fighting since the conflict in the east began in late March, and Ukraine’s military escalation was a high-risk gamble; the rebels’ hope and Ukraine’s fear was that the Russian military would back up the militants. That didn’t happen, and Poroshenko believes the assault helped the Kremlin see reason.

“Russia has understood the danger of its policy toward Ukraine. The price is too high. Hundreds of lives. Soldiers and heroes of Ukraine, civilians,” he says. “And dozens of coffins are going back to the Russian Federation. What are they dying for?” Poroshenko says his priority as President is to modernize and equip Ukraine’s military, which he says is the only kind of strength Russia understands. “If we don’t defend ourselves, no one will.”

Poroshenko’s résumé suggests that for all his tough talk and uncompromising deployment of the military, he is a practiced dealmaker. He made his billion-dollar fortune in the chocolate business, building on his knowledge of the Soviet cocoa trade to start a candy conglomerate called Roshen, one of the biggest confectionery firms in the region. That earned him the moniker Chocolate King, but it was his move into the business of television news that eased his climb through the political ranks.

In 2004 the outbreak of Ukraine’s pro-Europe Orange Revolution threw the political class into flux, and Poroshenko, who had by then served for six years as a center-left member of parliament, formed an alliance with the revolution’s charismatic leader Viktor Yushchenko, who was badly in need of friendly media coverage. As hundreds of thousands of people gathered that winter in Kiev to support Yushchenko’s demand for European integration, Poroshenko’s fledgling news network, Channel 5, became central to the uprising. “We became the mouthpiece of the Orange cause,” one of its former editors tells TIME.

Poroshenko has been a mainstay of Ukrainian politics ever since. He has served in senior posts in three successive governments over the past decade, from Foreign Minister to chairman of the central bank, always showing an ability to stay close to power regardless of whether the ruling elites were leaning toward Russia or the West. That knack for compromise was his greatest asset in this winter’s revolution and during the presidential race that followed.

The ouster of President Viktor Yanukovych, who fled to Russia at the end of February, opened the field to 21 candidates, ranging from militant right-wingers to Kremlin loyalists. Poroshenko was able to straddle many different political constituencies. Having played a leading role in the revolution, he had no trouble appealing to its supporters, but he also reached out to ethnic Russians who make up around 17% of Ukraine’s population and were outraged over this winter’s pro-Europe revolt. “Ukraine needed a leader who could calm the situation and talk to all sides,” says Volodymyr Fesenko, a political analyst in Kiev. “People voted for him as a man who could bring peace.”

Poroshenko was not afraid to risk his neck as he campaigned. His whistle-stop tour wound through the separatist badlands in eastern Ukraine all the way up to the Russian border. In the easternmost region of Luhansk, “the separatists made an attempt to take me and my staff hostage,” Poroshenko says. Andriy Zhigulin, an adviser who was with him at the time, recalls their convoy being chased through Luhansk by separatist rebels, forcing Poroshenko’s car to cut through a field to get to the airport, where a plane was waiting to evacuate them. Harrowing as that experience was, it showed voters that he was serious about negotiating with the eastern regions for the sake of national unity.

That won’t be easy. On Poroshenko’s orders, the Ukrainian military has assaulted rebel-held towns with air strikes and artillery fire, causing scores of deaths and injuries, massive property damage and a deep hatred of the government in many communities. “How can I look at Poroshenko as anything but scum after all that’s happened?” asks Irina Smolina, whose 20-year-old son Artur was wounded in the leg last month during clashes with the Ukrainian military. Her son was unarmed at the time, and if he decides to join the insurgents, his mother says she would understand. “What else are we supposed to do?”

The new President intends to win over people like the Smolins by turning them against the rebels, whom he has cast as terrorists holding the east of the country hostage. The vast majority of the people who live there, he says, “are absolute Ukrainians, absolutely clean, honest and upstanding people who we need to protect.”

That’s a tough sell for a people who feel they’re under siege, many of whom were not able to take part in the election that brought Poroshenko to power. Rebels kidnapped some election officials on the day of the ballot and kept the vote from proceeding in dozens of towns and cities in the east. Poroshenko dismisses suggestions that he doesn’t have a mandate to rule there. “These were the most transparent, the most free and the most democratic elections in Ukraine’s history,” he says, while the people who renounce their results are most likely “besotted with Russian propaganda.”

Pile those issues of legitimacy onto the dire state of Ukraine’s economy and the full weight of Poroshenko’s burden starts to become clear. With the industrial heart of Ukraine paralyzed by guerrilla warfare in the regions of Donetsk and Luhansk, the economy is set to shrink by at least 5% this year. An aid package that comes to more than $30 billion in Western loans has propped it up for now. But the reforms that Poroshenko will have to undertake on signing an integration deal with the European Union this year, as he has promised to do, will likely require his government to invest much more than that in bringing Ukraine’s industries and infrastructure up to E.U. standards in the coming years.

But those concerns are secondary, Poroshenko says, to the pressing need to find “an understanding” with Russia. Although the West has helped achieve that by threatening sanctions on Russia’s economy if it refuses to negotiate, no Western nation is ready to come to Ukraine’s defense if Putin chooses to send his military to aid the separatist fighters. “When a leader in the Kremlin decides to use force in Eastern Europe, he has rightly calculated that the United States will not use force and does not have the ability to deter that aggression,” says Michael McFaul, who served for two years as Obama’s ambassador to Moscow before stepping down in February.

At least in military terms, that leaves Ukraine standing alone as a kind of buffer state in a confrontation the Ukrainian President sees unfolding between Russia and the West. “An extremely dangerous precedent has been set,” says Poroshenko. Russia has unilaterally redrawn a European border for the first time since the end of World War II. “What happened was the destruction of the entire postwar architecture of global security,” he says. “And the world needs to find an effective way to react to that precedent.”

No one has yet come up with a way to do that apart from bringing Russia and Ukraine to the negotiating table. The hope in Western capitals is that their truce will be a kind of diplomatic bridgehead, preventing Russia from challenging any more of Europe’s borders. It may pain him, but that leaves Poroshenko with no choice but to continue his presidency the same way he started it–by talking to the enemy.

–With reporting by Michael Crowley/Washington 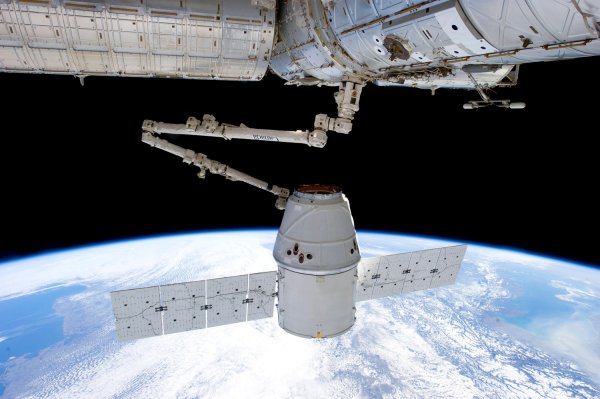 Russia, We Have a Problem
Next Up: Editor's Pick