The Surprising Countries With More Women in Corporate Leadership Than the U.S.—Or Even Scandinavia

Where’s the best place to live if you’re female? For years, the answer has remained: go north, young woman. The Nordic region consistently ranks highest on the global gender parity charts, which grades nations on bridging gender gaps in political and economic empowerment. Some experts attribute the region’s success to gender quotas, which are used to boost women’s leadership on corporate boards and in government. The basic theory: more female boardroom directors mean more female CEOs.

It’s not quite working out that way.

This means it may be time to find a new set of nations to put on our gender parity pedestal; some new models are emerging in places you wouldn’t expect.

How did Scandinavia become a women’s empowerment mecca, anyway? Gender parity became known as a Scandinavian novelty back in the 1970s, when the region implemented its first successful legislative gender quotas as a response to pressures from women’s groups and female politicians. The government never employed a law or constitutional mandate to recruit women into politics; instead, political parties incorporated voluntary quota targets to improve female recruitment. “The pressure to increase women’s representation was applied to all political parties in Scandinavia,” says Professor Drude Dahlerup of Stockholm University, creating the illusion of a uniform gender quota program. Today, Scandinavian legislatures boast roughly 40 percent female political participation, the highest in the world.

Success in bridging the political gender gap encouraged countries within the region to tackle the next area of female disempowerment – the corporate sector. Unlike legislative gender quotas, corporate gender quotas arrived via national legislation.

Beyond the boardroom, the law seems to be having little effect: Female leadership at the managerial level is low and virtually nonexistent at the executive level. Proponents of gender quotas contend that quotas are necessary to overcome the systemic discrimination that has prevented women from reaching the C-suite. By helping women gain access to opportunities once elusive to them, they can then proceed to climb the proverbial ladder of success. Yet, quotas have seemingly failed to promote women in this way; as one Swedish banker points out, “even with a 50/50 division of male and female employees, all my managers are male.”

Things aren’t much better in the United States, where female executive growth has remained stagnant. Although women comprise nearly half of the workforce, according to Catalyst, only 14.3 percent hold top executive office positions at Fortune 500 Companies and only 20 percent are in senior management roles.

So where are women climbing the corporate ladder? In countries you would probably least expect. The highest proportions of women with senior roles are in the BRICS nations–Brazil, Russia, India, China, and South Africa. There, women comprise 30 percent of senior management positions, which is higher than the global average (24 percent). What is more surprising is that none of these countries have enacted compulsory quotas or legislation addressing this issue. Russia has the highest proportion of women in senior management globally (43 percent) without this type of gender programming. The same applies for the neighboring Baltic States—Estonia, Latvia, Lithuania, Georgia, Poland, and Armenia– which boast 30 percent or more. Between 2012 and 2013, China doubled the number of senior management roles held by women from 25 per cent to 51 per cent.

Why are women in emerging markets becoming business leaders faster than those in the developed world? Increased investment in women’s education is a major catalyst. Women are graduating from universities and graduate programs at higher rates than men and are better positioned for senior management positions when they open up. For Eastern Europe and Southeast Asia, this growth can also be traced back to the promotion of women within Communist regimes. In the former Soviet Union, Communist leaders promoted women within rapidly expanding services sectors, such as health, education, and accounting. Equal opportunity is deeply embedded in Chinese society, which has helped boost gender equality (Mao Zedong famously said that “women hold up half the sky”). This plus rapid urbanization and low childcare burdens from China’s one-child policy enables more women to work.

Child planning and work-life balance challenges continue to be the most common reasons why women turn down senior positions within companies. Even among the Nordic countries where social and economic policies are especially supportive of working mothers, women typically begin to drop off in the middle of management trajectories, coinciding with the time they begin to have families.

That illuminates a flaw of the corporate board quota system: too much emphasis is placed on boosting numbers of women on top, instead of the middle. The theory that more women at the top will inspire women to strive to the top is problematic if there are no women to promote. The mid-career space is where companies need to find solutions to keep female talent strong. According to Sofia Falk, founder of Swedish company Wiminvest, companies would be wiser to offer management incentives to women in the form of private child care, grocery shopping, shared management responsibility, or technical solutions to work from home instead of more money or a company car.

Despite these mixed results, support for corporate gender quotas continues to grow. According to the 2014 International Business Report the proportion of business leaders who support the idea of quotas rose from 37 per cent to 45 per cent in the past year; this support includes businesses in regions that have yet to implement corporate quota policies, like Southeast Asia (55 percent) and Eastern Europe (43 percent). Gender quotas are a start, but smart companies will recognize that it will take a lot more – mentoring programs for women, stronger family support policies, and equal pay structures – to finally shatter those glass ceilings.

Maria Saab, J.D., is a research fellow at the New America Foundation, and a contributor to New America’s Global Gender Parity Initiative. This piece originally appeared at The Weekly Wonk. 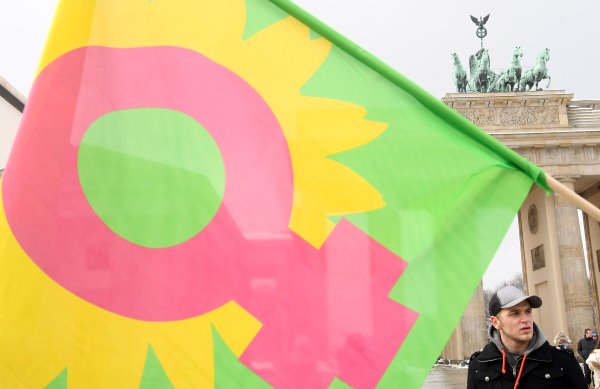 Feminism Has a Bra-Burning Myth Problem
Next Up: Editor's Pick