God, Soccer, and the World Cup

Across much of the world, soccer is known as the beautiful game. For me, soccer first opened my mind and heart to the experience of the existence of the transcendent – that which could not be explained away by the simple laws of physics – and the game taught me invaluable lessons for life’s spiritual journey.

Let me explain. This may sound heretical if not blasphemous, but if I were to write an honest spiritual autobiography, I would say that much of what I learned about faith in a higher power and of what it takes to reach greater heights within myself came initially not through any formal doctrine or religious study, but rather through my love (okay, obsession) with playing and watching soccer.

I first fell in love with the game during the 1990 World Cup. At the time, I did not have a favorite player or team nor did I even know that much about soccer. But, there was something about the preparation before matches, the exquisite athleticism and skill during the game, the winning combination of teamwork and strategy, and those moments of pure magic and genius, that drew me to the game. Soon after that world cup, I took to playing the game myself and even aspired to become a star on the field.

Looking back on it all, there was something in that pure joy of being an early convert to the game of soccer that was deeply spiritual. When Roberto Baggio neatly played off of his teammates to dodge through the entire Czechoslovakia defense and score his first goal of the tournament, it was a divine experience that, as a young boy, opened my senses to believe in transcendence. In that moment I witnessed something greater than physics and pure skill, it was something much more. And, I witnessed this again and again throughout that world cup and beyond in awesome goals, inspired passes and spectacular saves.

And, when I stepped on to the soccer field for the first time myself, I really wanted to experience something of that transcendence myself. But, as I learned the hard way it did not come easy. Instead, almost every time I touched the ball it was an embarrassment. Chances would come and go, but making something of those moments felt impossible. It was through that experience, that I learned one of the most important lessons of life – that training, discipline, hard work, commitment, struggle, courage, sacrifice and much more were needed if I ever wanted to experience what all the greats experience. For years I honed my skills everyday as a defensive midfielder and backup goalkeeper (mostly playing left bench for my teams) hoping to experience something special. It was not just about a game, it was about believing in something greater than self. Every time I stepped on the field, I would make a sincere prayer. I believed that God could make it happen for me if I just gave it my all.

Then, one day, it finally happened. The soccer club I used to play for in high school had reached the semifinals of the intramural tournament. Just before the match our star goalkeeper fell ill during warm up. He was out. The coach looked at me, handed me the goalkeeper’s gloves and off I went to defend the goal. For the most part I was just called upon to make simple saves behind a great defense. But, with a minute left in the match and my team leading just by a single goal, a forward from the opposing team somehow managed to get just behind my team’s defenders as the ball bounced perfectly for him right in front of goal to volley home the goal that would send the game into overtime. As we held our collective breath, my first instinct was to just throw myself across the mouth of goal and toward the spectacularly well struck soccer ball. I felt the spinning ball barely touch my shoulder as I tumbled to the ground expecting the worst. Instead, as I gathered myself and looked upward, I found the striker with his face buried in his hands instead of celebrating and all of my teammates running toward me with euphoric joy. Moments later the final whistle blew and we had won the game. It felt like one of those moments that you live for. My coach hugging and congratulating me asked where I had learned to make such an incredible move. In reality, I did not. I experienced a moment that defied my own physics and what I was truly capable of on a daily basis (as future matches proved!) I experienced something really special in that moment.

But, I knew then as I know now that if it weren’t for all the pre-requisite years of commitment and discipline, that moment would never have been possible. And, I realized then as I do now that all of those players I watched for hours and coaches who helped me along the way deserved much gratitude. I also knew that my magical moment would have been for naught if it weren’t for the victory that we achieved as a team. And, as a team we achieved success because of our values – patience on the ball, assisting and strengthening one another, and showing courage to move forward.

As a struggling spiritual seeker and now Imam, I have found that the spiritual journey is not dissimilar to the path a soccer player needs to take. Seeking God necessarily required of me daily disciplines of praying, chanting, fasting, serving, and so on. And, I found that I can’t do it without role models and mentors, living and dead, who show me the way through instruction and inspiration. And, finally, I discovered that journeying to God with a community of people who have the same goal and orientation is that much more realistic and fulfilling, and that it is in community that we can strive toward the highest values and virtues.

Religion and soccer, when rooted in simplicity and beauty, have great power to bring people together and to nurture higher values in people. Sadly, institutionalized religion and the organizing soccer bodies, such as FIFA, are too often corrupted by the pursuit of power instead. Both are in need of much reform if they are to play the critical role they must play in a broken world.

Enjoy the world cup starting on Thursday and make it a point to watch it with people, those you know and those whom you do not. It might be the start of something really special. 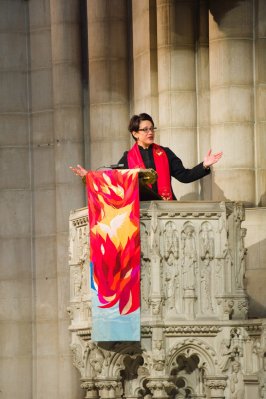