Cantor To Resign as Majority Leader

Eric Cantor said Wednesday that he will step down from his post as House Majority Leader, capping a sudden fall from political power that started with a shocking electoral defeat Tuesday.

“It is with great humility that I do so, knowing the tremendous honor it has been to hold this position,” Cantor told reporters in Washington. His resignation from leadership will be effective July 31.

“While I may have suffered a personal setback last night, I couldn’t be more optimistic about the future of this country,” Cantor said. Pointing to House Republicans’ work on spending cuts, education reform and opposition to President Barack Obama’s health reform law, Cantor said: “Now some people think Washington gets nothing done. Well there’s a stack of bills waiting in the Senate that shows House Republicans get things done. A lot of things.”

His defeat had already touched off a furious scramble, with several prominent Republican lawmakers angling for a chance to replace Cantor in the House GOP hierarchy. Cantor was widely seen as a front-runner to succeed House Speaker John Boehner. Cantor said Wednesday that he plans to support Rep. Kevin McCarthy of California for the job, who he said “would make an outstanding Majority Leader.”

Cantor did his best to avoid opining on why he lost, but he pushed back against the idea that he had been too focused on his leadership role and not enough on his district. “I was in my district every week,” he said. And Cantor sought to tamp down the narrative that his defeat exposed a deeper rift in the Republican Party at a time when Tea Party conservatives had seemed to be on the wane. “What divides Republicans pales in comparison to what divides us conservatives from the left and the Democratic Party,” he said. He said his focus would remain on the party’s legislative agenda until his term ends, and declined to speculate on what he might do after leaving office.

Democrats took the opportunity again Wednesday to hold up Cantor’s defeat as evidence the GOP has gone too far in blocking Obama’s agenda.

“I do think that this outcome does provide some evidence to indicate that the strategy of opposing nearly everything and supporting hardly anything is not just a bad governing strategy, it is not a very good political strategy either,” White House spokesman Josh Earnest said. “That is why the President has pursued a different approach [and]… has laid out what his priorities are.”

The maneuvering for Cantor’s leadership spot began shortly after his campaign was caught off guard on Tuesday night. The upset sent shockwaves reverberating through the House GOP, but the initial surprise soon yielded to ambition. The first question is who supplants the seven-term Virginia Republican as the GOP’s majority leader and Boehner’s No. 2. The natural successor for the job is McCarthy, the No. 3 House Republican. McCarthy has kept a low profile since Cantor’s defeat, issuing only a brief four-sentence condolence statement, but is expected to make a play for the job.

Rep. Pete Sessions of Texas, the chairman of the powerful House Rules Committee, has begun lining up support for a competing bid. And fellow Texas Rep. Jeb Hensarling, a favorite of the GOP’s Tea Party wing, is also considered a possible candidate. Hensarling said in a statement that he is “prayerfully considering” a run at a leadership post.

“McCarthy relied on Cantor to pull him along while working closely with him,” says one GOP aide. “This makes it likely that Hensarling gives it a shot.”

Should McCarthy move up, multiple candidates are also lining up to replace him as the conference’s whip. Rep. Steve Scalise of Louisiana, who heads the roughly 170-member Republican Study Committee, is already trying to “lock down support” from a bloc of conservatives, according to another House GOP aide. And Illinois Rep. Peter Roskam, the party’s deputy whip and a strong fundraiser, is expected to mount a bid for the role.

Rep. Cathy McMorris Rodgers (R-Wash.), the GOP’s top-ranked woman, must also decide whether to launch a campaign for a higher role or remain in her perch as the party’s conference chair. “She is assessing how she can best serve the people in her district, the Conference, and the country,” says a GOP aide. “She’s hearing from a lot of people and talking to a lot of people, but hasn’t made any decisions.”

As Republicans scramble, Democrats are planning to use the jockeying to argue their Hill opponents are consumed with “chaotic” internal squabbles, says a Democratic strategist familiar with the party’s midterm elections planning.

“This is a speech I never expected to give,” Boehner said in remarks provided to reporters. “I want to start by offering a heartfelt thanks to Eric and his staff for their service to our conference, our institution and our country.

“We’ve been through a lot together,” Boehner added. “When I was elected majority leader eight and a half years ago, Eric was there, as the chief deputy whip. He’s always been there. There’s no one who works harder, or puts more thought, into advancing our principles and the solutions we want to enact for the American people.” 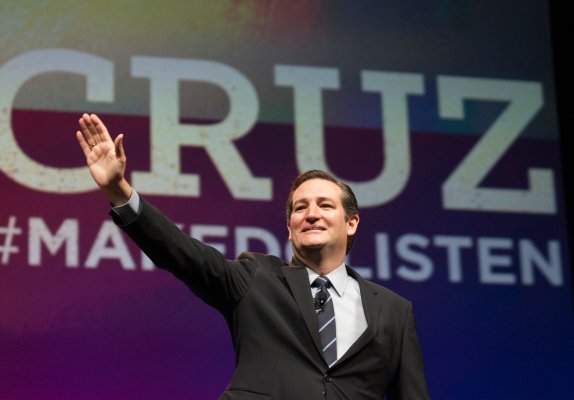 Republicans Eye Revenge Against Ted Cruz
Next Up: Editor's Pick