“I liked it. I was good at it. And really–I was alive.” –Walter White

“Well, the old Lester, now he would’ve just, well, let it slide. But not this guy.” –Lester Nygaard

For the past decade or so, the story of ambitious TV drama has been the story of antiheroes: protagonists (usually though not always men) who complicated the traditional categories of hero and villain. It could be Don Draper–deep-feeling and dedicated at work, insensitive crapball at home. (Or sometimes vice versa.) Rescue Me‘s Tommy Gavin, selfless hero, selfish heel. Captivating mob bosses, corrupt but effective cops, devious but philosophical Old-West crime lords.

The antihero was, among other things, a way of solving a storytelling problem: how do you break from the tired formula of good guys against bad guys while building a narrative around a protagonist people will want to keep watching for years? Those stories have been responsible for some great TV, but over time they threatened to became their own kind of formula: 50 shades of morally gray.

On its face, FX’s Fargo seemed like it could end up another riff on this format: regular schmo Lester Nygaard (Martin Freeman) grows a spine, embraces his demons, becomes–well, a bad man, but a man nonetheless. But over the course of the miniseries, Fargo has managed to do something different. It’s telling a story of actual good people and actual bad people, one in which we have clear rooting interests, without moralizing or dumbing down its worldview.

The relationship between Lester Nygaard and Lorne Malvo is like a answer-song to Breaking Bad, in particular to the idea that, however thoroughly Walter White damned himself, he at least got back his dignity. Malvo’s theories of man-as-animal–getting in touch with your “inner ape” and fighting off the “red tide” and recognizing your “predator” wiring–are like a Walter White fan page mixed with a little men’s-rights-advocacy and Discovery Channel. (You and me, Lester, we ain’t nothing but mammals.) It’s the old antihero rationalization taken to its logical, demonic extreme.

And I do mean “demonic.” Billy Bob Thornton makes Malvo a magnetic presence, but I think the character almost doesn’t make sense unless you view him as something like a magical being. He doesn’t have much backstory to speak of (maybe this week’s allusion to an “angry” dad and a “kid with a black eye” hinted at his childhood, maybe not). He’s a master of disguise, he can appear almost as if by sorcery, he has an almost beyond-human calm. In episode 9, he tells Molly’s dad that he hasn’t had as good a piece of apple pie “since the Garden of Eden.” But was he Adam or the serpent?

Malvo is more than just a villain in Fargo; he’s a Mephistophelian character whose hobby is creating villains–literally collecting them, in the form of a briefcase of angry, anguished confessional tapes that he listens to the way you and I might listen to ocean waves to get ready for bed. He breaks people, physically, to pay the bills, but for his own pleasure, he breaks people bad. Malvo, really, is no mere mortal: he is a cable-antihero-drama producer, for an audience of one.

And while Lester may seem to fit the role of the everyman who we identify with even as we deplore his moral failings, it turns out he’s not that: he’s simultaneously too weak and too depraved for it. At first, he’s overwhelmed by the murders of his wife, Sam Hess, and so on; then, given the cursed gift of villainy by Malvo, he’s too good and remorseless at self-preservation to root for in any way. Whatever personality he has has been subsumed by what he’s gotten from Malvo. By last night’s episode, when he manipulates his pitifully devoted new wife into walking to her death in his own orange parka, he’s neither a man nor a fearsome predator. He’s simply a rat who’s learned some tricks.

What keeps this from being depressing–indeed, what makes Fargo not just a powerful show but a pleasurable one–is that it sets Malvo and Lester against a larger background of goodness. The incredibly tense faceoff between Thornton and Keith Carradine in the diner was like a Western with pie. But Fargo‘s not a simple black-hat vs. white-hat show, because it’s concerned not with heroism or nobility but something both more common and more interesting: decency.

Molly Solverson is decent. Gus Grimley is decent. Even Bill Oswalt, frustrating Molly’s investigation at every turn, is essentially decent if clueless. But none of them gets anything done simply because of decency; none is a solitary hero. Decent people need one another to defeat the predators. Molly does a tremendous amount of sleuthing on her own, but it’s only so much use until someone else listens. (There’s a terrific moment from Allison Tolman in episode 9 where Key and Peele’s FBI agents eagerly ask Molly to tell them everything she’s learned and Molly catches her breath, just for an instant, as if she’s so happy not to be alone with her beliefs that she could cry.)

There’s good and bad in Fargo, yet not black and white. The decent people don’t automatically triumph because they’re good, in the old model of TV morality. But the show also doesn’t adopt the pose of gritty-drama-cynicism, where good is overwhelmed because evil is stronger and less constrained. (Game of Thrones, great show that it is, sometimes falls into this reflex pattern, though its philosophy is really that goodness is only effective when backed by power.)

In Fargo, decency isn’t a superpower or a curse. It’s just hard work, and yet Fargo‘s universe tends toward it. Like Molly, Noah Hawley and the Fargo creative team have taken on a job that’s tough but rewarding. They’ve managed to make good and evil interesting again. 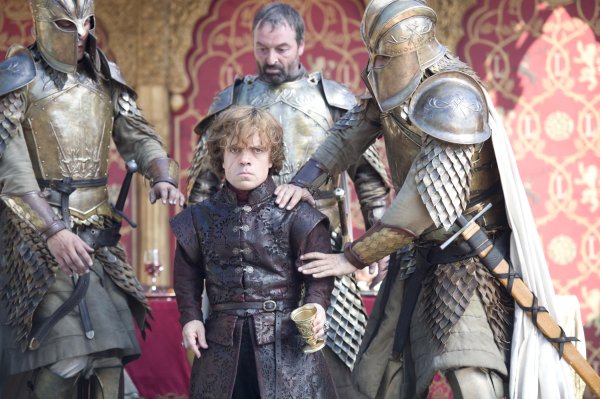 Game of Thrones Author Would Make HBO Show Longer
Next Up: Editor's Pick