No, NASA Is Not Launching a Flying Saucer

The mission, which was set for Wednesday but was scrubbed due to weather, will take off from the Navy’s Pacific Missile Range Facility in Kauai and is all about figuring out new ways to land on Mars—which is not easy. If you’re trying to land on an alien planet, you want either a big fat quilt of atmosphere—think Earth or Venus or the Saturnian moon Titan—which means you can just dive-bomb on in, throw out a parachute and down you come. The best alternative is to have no atmosphere at all—think the moon—which means you don’t have to deal with problems of atmospheric friction and aerodynamics and can simply use rocket power all the way down. Mars is—literally—the worst of both worlds. Its atmosphere is only about 1% as dense as Earth’s, which is more than enough to cause all sorts of drag and heating problems but not nearly dense enough to support a full parachute landing.

That’s part of the reason the Mars landings that have taken place so far have been such an improbable mix of hard science and whimsy: Remember the airbags that swaddled the first three rovers as they bounced down—rather than touched down—in the Martian soil? Remember the Curiosity rover being lowered to the surface on cables from a hovering “sky crane,” a sort of cosmic marionette that seemed like madness until it turned out to be genius?

Nice stuff, but it would be nicer still of we could do things a little more easily. And so engineers from NASA’s Jet Propulsion Laboratory (JPL) have developed what they’ve dubbed the Low Density Supersonic Decelerator (LDSD).

The LDSD, in fairness, does look flying saucer-ish. It’s a 20 ft. (6 m) diameter dish that is part hard shell and part inflatable bladder. A massive balloon (“big enough to fill the Rose Bowl,” says project manager Mark Adler) will lift the vehicle to an altitude of almost 23 miles (37 km). At that point the balloon will be jettisoned and a rocket motor will kick in, carrying the LDSD to a peak altitude of 34 miles up (54 km), or about the upper limit of the stratosphere.

“The thickness of the air up there simulates the atmosphere of Mars,” says Adler. And that’s the whole point.

Once the rocket burns out, the vehicle will arc over and begin plunging toward the ground. At that point it will be moving at Mach 4, or about 3,000 mph. As it enters thicker air, its speed will slow slightly. Until that point, the inflatable bladder will have been empty, but at Mach 3.8 it will fill with gas, creating a sort of doughnut surrounding the hard shell which will increase its overall diameter from about 13 ft. (4 m) to its full 20 ft. That drag will cut the descent speed nearly in half, slow enough for a massive parachute—110 ft (33.5 m) across—to open safely. About 45 minutes later, the vehicle will splash down in the Pacific—an elegant dress rehearsal for a real Mars landing except, of course, for the landing in water part.

JPL scientists have been keen to get the LDSD flying for a long time, especially since NASA’s long-term Mars plans include a robot sample return mission and, further down the line, crewed missions. All of that requires much bigger spacecraft and much more robust landing systems. “We’ve been using the same parachute design for 40 years,” says Adler. “The last time we did a test like this was 1972.” There is already a larger, 26 ft. (8 m) version of the LDSD that will push the limits even further.

All of this is what makes NASA’s insistence on using the flying saucer rubric (even if they hedge and put the term in quotes) and the media’s happy parroting of it, here, here, here and elsewhere so unnecessary. Yes, it’s hard to sell science to a taxpaying public, especially when it’s expensive science. But simplifying it, candifying it—turning it into a little sweetie that goes down easy—does nobody any long term good. What NASA is actually doing in Hawaii is test-flying a very early version of a Mars vehicle that will climb dozens of miles in the sky, auger in at 3,000 mph and safely parachute into the ocean—using a balloon the size of a stadium to get the job done.

The facts, in this case as in so many other cases, seem nifty enough. So let’s stick to them. 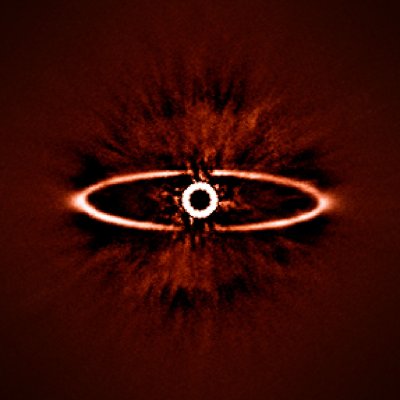 SPHERE's First Image Looks Like The Eye Of Sauron
Next Up: Editor's Pick