Kareem Abdul-Jabbar: We Need to Stamp Out Misogyny in Sports

More than 100 community members came in support of the #YesAllWomen Live Rally in Seattle, May 30, 2014.
Alex Garland—Demotix/Corbis
By Kareem Abdul-Jabbar

The most moving reading I’ve done in the past six months has come from the anguished tweets on #YesAllWomen that followed the Elliot Rodger shootings in Santa Barbara, Calif. Even more depressing than his horrific actions is the feeling that the national debates about cultural misogyny, mental-health care and gun control that followed have already lost momentum — shoved back into their dusty corner, awaiting the next bloody tragedy. Public outrage has a short half-life. Fist-shaking and finger-pointing quickly degenerates into helpless shrugging.

But we can’t let go of this question: Why in America do our mentally disturbed take out their anger so violently? In a Sept. 19, 2013, op-ed article in the New York Times, Stanford University psychological anthropology professor T.M. Luhrmann explained how when schizophrenics in the Indian city of Chennai (formerly Madras) hear voices, they are told to do domestic chores like cook, clean or bathe. But schizophrenics in San Mateo, Calif., hear voices that tell them to take very violent actions like cutting off a head and drinking the blood. In India they clean; in America they kill. America also has the highest gun-ownership rate in the world. And our number of multiple killings is nearly as high as that for the rest of the world combined.

Even more disturbing is why so much violence in America is directed at women. The answer to this question, at least in part, is that it’s a result of a lifetime of cultural influences. And while there are surely plenty of cultural influences to blame, one of the sources of this negative influence is amateur and professional sports.

Surprised to hear me say that? I’ve spent much of my life in sports and promoting sports as a positive influence on our youth and our culture. The benefits are obvious: building healthy bodies, practicing sportsmanship (should we call that sportspersonship?), learning teamwork, creating a supportive community and much more.

In fact, the image of girls and women in sports is much more culturally positive than that of mainstream society. In the sports world, women are praised for their athletic ability — not their physical appearance. We cheer the sweaty woman running down the field for her effort. Mainstream America tells her heels are required because she’s too short, makeup is required because her face isn’t attractive enough, cleavage is required to give men a reason to pay attention, hair coloring is required because aging is forbidden and blondes are sexier, Photoshopping is required because no woman (not even a model) can match the fantasy woman our culture promotes on the covers of almost every women’s magazine. (It’s not a coincidence that Rodger gave his object of hatred a hair color — “blonde slut.”) But in sports, women stand tall and proud in athletic shoes and uniforms because we’re more interested in what they do than how they look.

But — there’s a big but. Despite all the good in sports, there are many aspects of it that encourage our culture to look at women as less valuable than men.

The easiest way to determine women’s value to their culture is to look at how much we pay them in relation to men. Some studies suggest that in general women make less doing the same jobs as men (the Census Bureau concludes that women earn 77¢ for every dollar men earn). This national trend extends to professional sports. According to Forbes, the maximum salary for a player in the WNBA is $107,000, compared with the $30.5 million Kobe Bryant will make. Inbee Park, who won the 2013 U.S. Open in golf, received $585,000 for her victory. Justin Rose, the men’s winner, received $1.4 million. This disparity is seen less in tennis because Wimbledon, the French Open and the U.S. Open all pay male and female winners equally (which is why 7 of the 10 top-paid female athletes in the world are tennis players).

This discrepancy extends to coaching as well. For Division I college sports, men get paid significantly more. Male basketball head coaches averaged $71,511, while female coaches averaged $39,177. Even in gymnastics, which is predominantly female, male coaches are paid more. This doesn’t even address the fact that there are more opportunities for males than females to play sports, both as amateurs and as professionals.

Many will argue that the pay difference is the result of free-market supply and demand. More people want to see men play professional basketball than want to see women play, so the players are paid accordingly. You can’t argue with economics. There is truth to this. You can’t force people to attend a sporting event if they don’t want to.

However, this is something of a self-fulfilling prophecy. We can change things. First, we need to address why they don’t want to watch. This goes back to cultural biases. If we don’t value girls in sports in middle school and high school, then we don’t grow up to value them as professional athletes. And by value, I mean make athletic opportunities available, pay coaches equally and promote female sports with the same vigor with which we do male sports.

At the same time, the disrespectful and disparaging language used in sports furthers the gender gap. Male coaches often address their male athletes as ladies whenever they want to humiliate them. “Come on, ladies,” they’ll say, “lift your skirts.” Or, “You’re playing like a girl!” This is treated as a joke or good-humored tradition, but its long-term social effect is not funny. Even in movies and TV shows, we see tough women turning to men and saying, “Quit acting like a girl.” Cue audience chuckle at the reversal. But all that does is prove we’ve brainwashed women to be derogatory toward themselves.

We also need to address the culture of violence surrounding our athletes. When we see them resolving problems through violence, it can send a message to others to emulate them. Baltimore Ravens tackle Jah Reid was arrested for allegedly head butting, kicking and punching a man in a strip club (what attending strip clubs says about our culture of devaluing women is another matter). Colorado Avalanche goalie Semyon Varlamov was arrested on charges of kidnapping and assault of his girlfriend. Houston Rockets forward Terrence Jones was arrested for stomping on the leg of a homeless man. Former New England Patriot Aaron Hernandez was charged with murdering a friend. This year alone football players Chris Rainey, Robert Sands and Daryl Washington were arrested for domestic battery or assault. We can’t as a culture glorify violence and then be surprised when our members resort to it as our “heroes” do.

Which brings us back to #YesAllWomen. Despite more than a million responses, it probably won’t change anything. It should be a national wake-up call that such a forum even needs to exist. And we should celebrate the opportunity for women to express their frustration. But we need to remember that while misogyny may be perpetuated mostly by men, it is enabled by both men and women in society who embrace gender inequality — or simply let it go unnoticed.

It’s reminiscent of the 1947 film Gentlemen’s Agreement, in which Gregory Peck plays a journalist who pretends to be Jewish in order to write about anti-Semitism. His Waspish fiancée realizes that there’s a “gentlemen’s agreement” to ignore distasteful anti-Semitic comments (and by implication racist, homophobic and misogynist comments) as if they never happened. She also realizes that ignoring them is part of the problem because the silence encourages them and thereby taints our whole society.

We can change things. Small things. One at a time. We start by not remaining silent in the presence of misogyny, not tolerating violence as a form of communication, and demanding gender equality in education, sports and jobs. Right now, tennis is showing us the way. All athletes need to help finish the job.

Abdul-Jabbar is a six-time NBA champion and league Most Valuable Player. Follow him on Twitter (@KAJ33) and Facebook (facebook.com/KAJ). Abdul-Jabbar also writes a weekly column for the L.A. Register. 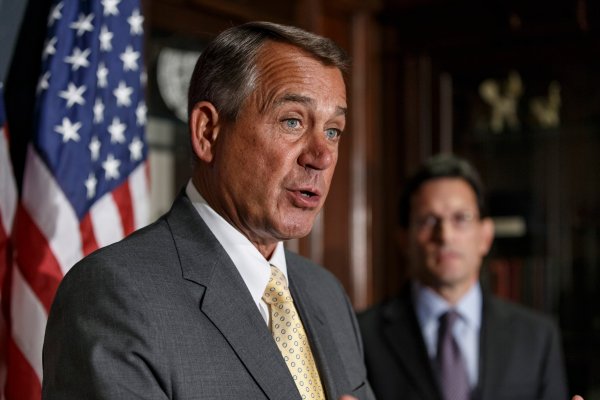 With Cantor Gone, Immigration Reform Is All On John Boehner Now
Next Up: Editor's Pick