At Union Theological Seminary in the City of New York, we have a particular call to live out our values in the world. In accordance with that call, our Board of Trustees voted unanimously today to begin divesting the school’s entire $108.4 million endowment from fossil fuels, becoming the first seminary in the world to take this dramatic step in the fight against global climate change.

As a seminary we are familiar with the scriptural warning that “the wages of sin is death,” and this could not be more literally true than it is in the case of fossil fuels. As vulnerable communities have been swallowed by rising shorelines, as potable water has become a commodity of increasing rarity, as hundreds of thousands of people have been killed by violent weather, it is ever clear that humanity’s addiction to fossil fuels is death-dealing—or as Christians would say, profoundly sinful.

This concerns us deeply, and we are actively committed to finding new ways to participate in healing our wounded creation. We believe that the divestment of our endowment from fossil fuel companies is one small step in this direction.

This was not an easy decision for us. We depend on our endowment to support Union’s educational mission, and are committed to ensuring that our endowment can continue to support needed scholarships and faculty positions.

Fortunately, we can do this and remain fiscally responsible to our students, staff, faculty, and members of the Union community. We were heartened to learn that over the past two decades, a portfolio that had left out fossil fuel companies would have returned, on average, only six tenths of one percent less. This is a small financial loss when compared to the importance of our moral statement.

We realize that our endowment alone will hardly cause the fossil fuel giants to miss even half a heartbeat. That said, it is on moral grounds that we pursue divestment, and on theological grounds that we trust it matters. The Christian term for this reckless hope in the power of God to use our decisions of conscience to transform the world is resurrection, and I have faith in the power of resurrection.

In addition to our divestment and campus sustainability efforts, Union will host a conference in the days leading up to the United Nations’ Climate Summit in September called Religions for the Earth (religionsfortheearth.org). The event will culminate in an interfaith service and will be held in partnership with GreenFaith, the Interfaith Center of New York, the Parliament of the World’s Religions, the World Council of Churches, and Religions for Peace. We know that the effort to care for the earth must be an interreligious, global one, and we at Union look forward to hosting continuing conversations about the role of faith communities the movement to combat climate change.

Yet these efforts do not mark the end of our obligation to be faithful stewards of the earth. Certainly, there is more work to be done, by Union and by all people of conscience.

I hope our decision to divest encourages other seminaries and universities to recognize that there are things we can do as a country and as a people to cut down on our greenhouse gas emissions. For Christians, sin is the word that describes anything that prevents us from having a faithful relationship with God, with each other, with ourselves, and with creation.

We have sinned, and we see this divestment as an act of repentance for Union. All of the world is God’s precious creation, and our place within it is to care for and respect the health of the whole. Climate change poses a catastrophic threat. As stewards of God’s creation, we simply must act to stop this sin.

Serene Jones is President of Union Theological Seminary in the City of New York where she holds the Johnston Family Chair in Religion and Democracy. She is Vice President of the American Academy of Religion, an ordained minister in the United Church of Christ and the Christian Church (Disciples of Christ), and author of Trauma and Grace: Theology in a Ruptured World. She tweets online at @SereneJones. 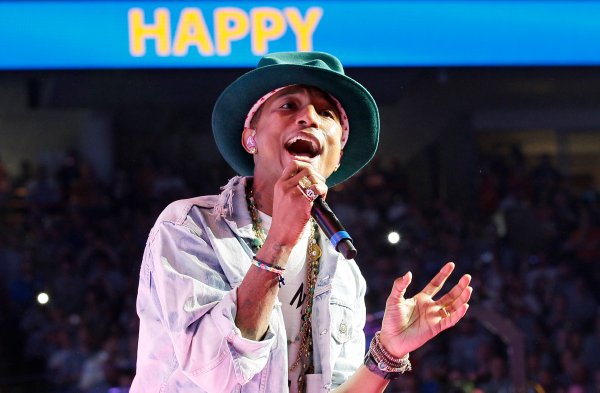 What can Pharrell's 'Happy' tell us about God?
Next Up: Editor's Pick