Monique Lamoureux is sitting in a Grand Forks, N.D., pub, checking out a brawl. It’s not a bar fight, though it feels like one.

Lamoureux is actually watching herself, on ESPN’s SportsCenter, punch a Canadian. A few hours earlier, Lamoureux and her twin sister Jocelyne, forwards on the U.S. Olympic women’s hockey team, were on the ice during the final seconds of Team USA’s Dec. 20 exhibition win over Canada. Jocelyne, ticked that Canada’s Brianne Jenner had thrown an elbow at a teammate, pummeled Jenner into the boards–a penalty, since there’s no checking in women’s hockey. The Canadian players took exception, sparking a melee. Monique tossed haymakers; Jocelyne tackled a northern neighbor to the ice. The Rocky theme blared in the arena.

In the pub, Monique, a Grand Forks native surrounded by friends, family and teammates during a postgame celebration, put her hand over her mouth, shocked–and delighted–by what she was seeing. Women’s hockey was actually on SportsCenter, alongside NBA and NFL highlights. She was seeing herself on ESPN for the first time–so cool. And she was not only throwing down on national television but also more than holding her own, thank you.

“If we feel like it’s an unnecessary hit, we’re going to stick up for our teammates,” says Monique from her family’s home the next evening, before a prime-rib dinner over holiday break. “There are consequences for playing like that.”

At the Sochi Olympics–or in all of sports, actually–you’ll find no fiercer rivalry than USA-Canada in women’s hockey. The men’s tournament may have the marquee names like Pittsburgh Penguins superstar Sidney Crosby, who’s trying to lead Canada to a repeat gold, and Washington Capitals wonder Alexander Ovechkin, who has the burden of leading the host nation, Russia. But the men also have their millions, their NHL teams and their pursuit of the Stanley Cup to work for. For the women, who typically earn little playing pro hockey, the Olympics are everything. They’re the only possible meal ticket. Such high stakes create rare intensity.

The Lamoureux twins, 24, feed off this heat. They’re giving this storied rivalry new pop; their grit may get the U.S. the gold after a 16-year drought. Raised in a North Dakota hockey family, the girls were schooled by show-no-mercy older brothers on a prairie pond. Thus trained, they then beat the crap out of boys in youth leagues. (To Jocelyne, hockey’s gender battles are even an academic passion: she just finished a master’s thesis on the benefits of competing against boys.)

For the twin enforcers of American hockey, clashing with Canadians is just business. In another USA-Canada exhibition, an October game in Burlington, Vt., Monique collided with Canada goalie Shannon Szabados while chasing down a pass from Jocelyne. Canada’s Courtney Birchard took Monique down. Jocelyne charged into Birchard, and all hell broke loose. “I don’t know them,” says Birchard. “All I know is they’re Americans and they’re dirty.”

These young women, however, aren’t goons. Their skills were on full display in Grand Forks, where Jocelyne, more of a playmaker than her sister, fired a no-look pass from behind the net to a trailing Monique. A more natural goal scorer, Monique kept the puck on her stick, patiently waiting for Szabados to overcommit, before punching in the game-tying goal.

In all but one of the Olympic competitions–the 2006 Games, in which Sweden ousted the Americans in the semis–the U.S. and Canada have squared off in the finals. The U.S. won the first women’s Olympic hockey tournament, in 1998, but Canada has taken the past three golds. The two countries are a near lock to knock heads again in the gold-medal game on Feb. 20. “For both sides, there’s a lot of dislike toward each other, on the ice anyways,” says Monique. “It’s no secret they really don’t like us two in particular. And I take great pride in that.”

That’s What You Get

Monique won the first face-off: She was born two minutes before Jocelyne. Pierre Lamoureux, an audio and security-systems contractor, and wife Linda, a former part-time medical assistant, had a half-dozen kids within a five-year span; the twins have four older brothers. And like the boys, they started skating soon after taking their first steps. Pierre, 53, was a goaltender for the University of North Dakota. His team won two national titles. Green Bay has its Packers; Grand Forks, the UND hockey team.

Geography blessed this budding dynasty. Behind one of the houses on their cul-de-sac, a neighbor had bulldozed the wall of a coulee to collect runoff that a fall breeze could freeze over, this being North Dakota. So hockey heaven was just across the street. The little Lamoureuxs couldn’t stop playing; Pierre or Linda would have to blow a whistle to summon them to supper.

On the pond, the girls got no brotherly love. The boys were more than happy to plow their sisters into snowbanks. “The feeling was, You’re a girl, so you’re not going to take the puck from me,” says Pierre-Paul Lamoureux, 26, a postgrad assistant for the UND men’s team. “There’s no way to cookie-cut it. We were a–holes to our sisters.” Even Mom showed tough love. When Jocelyne was in first or second grade, her brother Jacques–later a hockey star at Air Force–slashed her in the back of the leg with a stick. “So I ran in crying because he swung the thing so damn hard,” says Jocelyne. Mom’s response: That’s what you get for playing with the boys.

They didn’t stop. Before trying out for a boys’ peewee league in sixth grade–checking allowed–the twins followed their father’s instructions. Find the biggest kid on the ice, and put him on his ass. “They had to make a statement,” says Pierre. “Do something to get noticed. The mothers would get mad. The fathers, deep down, wished their sons were doing the same thing.”

In high school, the twins transitioned to girls’ hockey. They attended Shattuck–St. Mary’s in Minnesota, a prep powerhouse where Crosby once played. One opposing mom got so ticked at their aggressive tactics, she reached over the glass to try to snatch Jocelyne’s stick away during a game. Afterward, Jocelyne introduced herself and asked the woman if she wanted to chat, since, you know, she’d been yelling at her the whole game. “I was a bit of a smart-ass,” she says.

For college, the twins originally spurned North Dakota, whose women’s team was the pits, for archrival Minnesota. After their freshman season, however, they decided to go home and suit up for the school where their father and two older brothers skated. “I was like, ‘What the hell are you doing?'” says Jacques, 27. Minnesota was a proven winner. “I thought it was dumb.” Minnesota, indeed, has won the past two national titles. But by the time they finished their senior season at North Dakota last year, the twins had turned the program around. The school is currently third in the national rankings. “I’m really proud of that,” says Jacques, “after the fact.”

Jocelyne is the more approachable, talkative twin, quicker with a smile. “They used to share a cell phone in high school,” says Pierre-Paul. “When I called, I’d talk to Monique for two minutes, but then I’d talk to Jocelyne for 10 minutes.” Pierre-Paul, however, has noticed new confidence in Monique. “She always second-guessed herself, was a little insecure,” he says. “In the last 18 months, she’s made huge strides figuring out who she is, what she values. She’s becoming more comfortable with herself, not always falling in line with what Jocelyne or someone else wants to do.”

Monique concurs with her brother’s assessment and credits a painful experience–a divorce, about a year and a half ago–with helping her emerge. “I know for a fact it was the best thing for me,” Monique says. “Maybe it’s part of what has made me successful as an athlete, but my mind-set was, I’ll be damned if this is going to mess with the opportunities I have coming up. If I didn’t learn from it, if I didn’t grow from it, that’s on me. That’s my fault.”

The night after the Grand Forks exhibition game, the USA-Canada dustup is still on the sisters’ minds. They wish it hadn’t taken a brawl to give their sport the spotlight. Though they’re loath to complain about it. “Honestly, it’s good exposure,” Monique says.

In women’s hockey, the role of violence is always being debated. Allow bone-crushing checks, some say, and the game would seem more like “real” hockey, which could increase the sport’s appeal. Personally, the twins would love to hit more. But they think checking would stop girls from signing up to play. “It would put women’s hockey two steps back,” says Monique. “I don’t see how it can really benefit the game at this point.”

When not in training, Jocelyne had been hunkering down to write her master’s thesis in kinesiology. Title: “Should Girls Play Hockey With Boys? Perspectives From the USA Women’s Olympic Hockey Team.” (The answer, according to Jocelyne’s research, is yes: skating, shooting, stickhandling, passing, confidence and leadership all improve.) She earned the degree in December. She’s also planning a wedding for June.

Monique is pursuing her own master’s, but she’s putting off the thesis–and major life decisions–until the Olympics are over. It’s one goal at a time. “When I think about playing in the gold-medal game, I picture it being against Canada,” says Monique. “Those are the games you dream about. I can’t see it being any other way.” 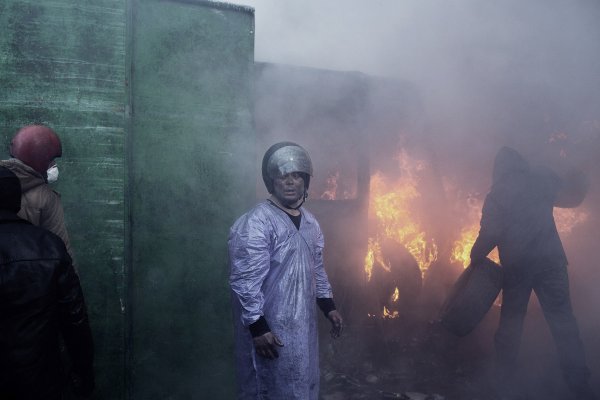 Kiev Rocked by Violence
Next Up: Editor's Pick