The shaky video, posted to YouTube on Sunday, shows a woman in the square, stripped naked, her body visibly injured, shoved and pulled by a crowd of men, while a uniformed police officer also struggles with the crowd. The incident prompted debates on television and radio and spilled onto the front pages of nearly all Egypt’s major daily newspapers. “Execute them,” roared a red-letter headline in Tuesday’s edition of the pro-government Al-Watan newspaper, in reference to the perpetrators. Seven men were arrested in connection with the attack. The woman, identified by police as a 19-year-old student, was hospitalized after the attack. At least three other women were assaulted in the crowd, according to local monitors.

The immediate reaction to the video response by political elites and members of the media provoked further public outrage. Some government supporters blamed the assault on the Muslim Brotherhood. The Brotherhood-backed Freedom and Justice website, meanwhile, attributed the attack to the “moral decadence” of Sisi’s supporters in Tahrir Square. Maha Bahnassy, a TV presenter for the pro-government Tahrir channel, provoked a furor for giggling on air during another journalist’s report on sexual assaults on Sunday. “Well, they are happy,” Bahnassy said during the broadcast. “The people are having fun.”

The public fury surrounding the incident drew unprecedented attention to the longstanding problems of rape, sexual assault and sexual harassment, all of which have come to the fore since Egypt’s 2011 uprising that ended the three-decade presidency of autocrat Hosni Mubarak. Women stood alongside men on the front lines of the uprising, but the turmoil that followed placed women’s bodies in harm’s way. Sexual assaults by crowds of men became a consistent, if horrifying, component of the giant protests in Tahrir Square. Security forces also participated in well-documented cases of physical attacks and sexual assaults on women. In one iconic video now emblematic of state violence against women, riot police stomped on the chest of a woman, bare except for a blue bra.

The attack also posed a conundrum for Egypt’s newly-minted president, Abdul Fattah Al-Sisi, the former armed forces chief who removed elected President Mohamed Morsi from power last year. One of Sisi’s first appearances in the public eye came in 2011 when he defended one instance of sexual assault, the use of so-called “virginity tests” by soldiers on women detainees. During his presidential campaign, Sisi vowed to clamp down on sexual assaults, and before his inauguration interim president Adly Mansour issued a decree criminalizing physical and verbal sexual harassment and imposing six-month-to-five-year prison terms on those convicted of such acts.

In one of his first acts since he assumed the presidency, Sisi’s office released a statement saying he ordered Interior Minister Mohamed Ibrahim to “vigorously enforce the law and take all necessary measures to combat sexual harassment, an unacceptable form of conduct, alien to the best principles of Egyptian culture.” The statement also said “every family bears a responsibility to disseminate and instill within its children core moral principles and correct behavior.”

Veterans of the long struggle for women’s rights in Egypt responded skeptically. “It’s not a matter of law,” said Nawal El Saadawi, a physician and a preeminent Egyptian feminist writer and activist. “We have many laws against sexual assault and attacking women and all that, but it’s never put in force, even the new law that came a few days ago. We cannot eradicate such a very deep assault against women just by law.”

Nihal Saad Zaghloul, an activist with an anti-sexual harassment and assault group called Imprint, attributed the public outpouring around the recent case to the fact that police intervened and that the video surfaced. “The problem is, and it’s very sad, that not many people believed this for the past three years that [mass sexual assaults have] been happening. People only believed it when they saw in in action.”

“It made sort of a big bang, and we’ve been trying to talk about it for the past three years. It happened on the 30th of June but people decided to be quiet because they didn’t want to ruin the image of the revolution,” Zaghloul said, referring to the day of mass protests against Morsi in 2013 that triggered his removal by the military.

“People have always claimed that the rapes in Tahrir were stories made up by protesters or [carried out by] a fifth column trying to spoil the image of Egypt, but now there is an actual video with a close-up of the victim,” said Amina Tarraf, an activist and researcher on women’s affairs. “This video changed something in people’s perceptions of rape and assault and how women are vulnerable in the public sphere,” she said. “It’s woken up the people.” 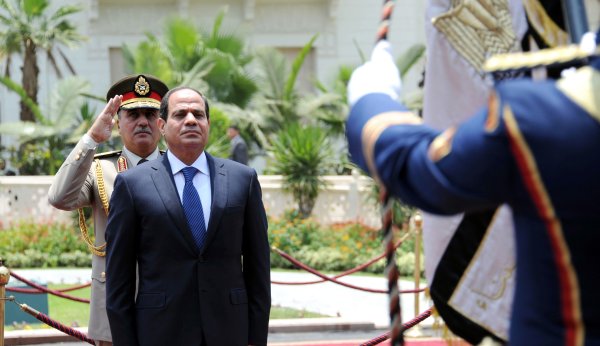