A man wearing Google Glass during the opening keynote at the Google I/O developers conference on May 15, 2013 in San Francisco, Calif.
Justin Sullivan / Getty Images
By Lily Rothman

The movie theater chain known for its tongue-in-cheek attitude and serious anti-texting policy has added another bullet point to its totally understandable list of “don’t”s: according to Deadline, the Alamo Drafthouse has banned the use of Google Glass in its movie theaters.

Tim League, the company’s CEO, said that he had personally tried Glass but was waiting to make a decision until customers began to bring the wearable device into theaters. And this time, he said, the reason for the policy wasn’t just a matter of keeping theaters dark and quiet. Though cell phones can distract over moviegoers from what’s going on on the screen, Glass can put a little too much focus there. The main concern at hand is that Glass enables recording, which means that any user could tape and pirate a movie.

Alamo Drafthouse isn’t the first theater chain to announce a Glass ban, but such prohibitions aren’t always as clear-cut as they may seem.

For one thing, the ban — which will apply to the use of the device “once lights dim for trailers” — will have to be case by case, League told Twitter followers who inquired about what would happen if a Glass user needed the prescription lenses in the device to see the screen:

And then there’s the matter of what such a ban can actually accomplish. As Forbes pointed out last year when Glass bans were first making news, the problematic functions in question are all things that can already be done by devices that many of us carry all the time. Glass does add a layer of deniability — you might be wearing it to see, you might be recording, nobody knows — but anyone concerned about others recording things in public, from embarrassing moments to Hollywood movies, has more to worry about than just Glass. And once Google has put the camera in on users’ heads, other tech companies are sure to follow, meaning that banning one specific device will get even more futile.

But, in the mean time, maybe movie theaters will find a way around those semantic concerns. Just last week, WIRED reported on the existence of a new solution to the problem: a device that detects the presence of Glass and remotely shuts off its access to wi-fi networks. 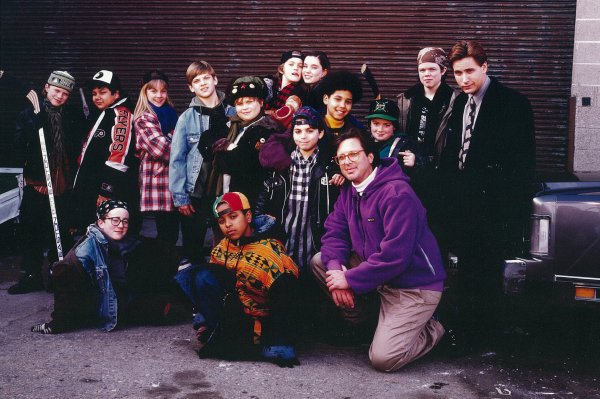 Could a Fourth Mighty Ducks Film Actually Happen?
Next Up: Editor's Pick