Astronomers have found some pretty strange objects lurking deep in the universe — voracious black holes more massive than a billion suns, lonely planets wandering among the stars, galaxies made almost entirely of dark matter, and more.

But what Emily Levesque found just beyond the edge of the Milky Way is arguably the strangest thing yet. “It’s bizarre,” says the University of Colorado, Boulder scientist. “It’s completely nuts.”

The nutty thing Levesque and three colleagues discovered looks like an ordinary red giant star, similar in appearance to Betelgeuse, which marks one of Orion’s shoulders. But nestled deep inside, like the yolk of an egg or the chocolate center of a hard-candy Tootsie Pop, is a neutron star — the super-dense remnant left behind when a star explodes. It is, she says, “unlike any star that we’ve ever seen.”

Perhaps the craziest part of all is that theorists have been thinking about these weird objects for decades. It’s not all that unusual for two giant stars to be locked in a relatively tight orbit around each other. If one of the stars explodes as a supernova — also not that unusual — you can end up with an ordinary star paired with a neutron star.

And if the orbit is tight enough, the neutron star can spiral in and be swallowed, intact, by the giant star, sinking to the core and setting up residence. The resulting chimera would look like an ordinary giant star with no obvious sign of its hybrid nature. So back in the ’70s, Anna Żytkow, now at the University of Cambridge, working with Caltech astrophysicist Kip Thorne, began to think about how you’d identify these things, which have been known ever since as Thorne-Żytkow objects, or TŻOs.

They realized that the neutron star’s surface, which would ordinarily be exposed to empty space, would now be in constant contact with the dense, gaseous substance of the enclosing star. “There would be an intensely hot thermonuclear burning region,” says Żytkow, who co-authored a paper being submitted to Monthly Notices of the Royal Astronomical Society announcing the new discovery.

Under those extreme conditions, the hybrid star would forge excess amounts of the elements rubidium, lithium and molybdenum. And if you studied the star with a sufficiently sensitive telescope, you could detect that excess. “Observers have looked in the past, but they were perhaps not looking at the best candidates,” says Żytkow. “The stars must be very red and very cool but very luminous.”

That’s just the sort of stars Levesque had been studying and writing about, though without the equipment to look for the signatures of the telltale elements — and Żytkow had been following her work. “We got an email one day from Anna saying, ‘I think some of the stars you’re finding might be TZOs,'” Levesque says. “I’d heard them mentioned in passing once or twice, but knew very little about them. We all read up on them a lot more.”

They then began training the powerful Magellan Clay telescope, in Chile, on the candidate stars, looking for the right chemical spectra. When they focused specifically on one called HV2112, located in the Small Magellanic Cloud, which orbits the Milky Way, they hit paydirt. “You can tell at a glance that it’s unusual,” says Levesque. When team member Nidia Morell, of the Carnegie Observatories, saw the star’s spectrum, Levesque recalls, “she said, ‘I don’t know what this is, but I know I like it!'”

As for what lies in HV2112’s future, nobody can really say at this point. The neutron star’s surface gravity is enormous, and while energy from the thermonuclear reactions keep the surrounding star from collapsing, some of its gas must be falling in. At some point, says Żytkow, the neutron star itself will swell to a critical mass, and then…well, that’s uncertain. “The whole thing could explode,” she says. “Or the neutron star could collapse to form a black hole. At this point, it’s difficult to say.”

Either way, the bizarre life story of this weird celestial object is far from over — and the ending is likely to be violent. Maybe a Tootsie Pop isn’t the best analogy for this new kind of star after all. It’s really more like the malevolent creature that bursts out of an astronaut’s body in what was easily the grossest scene from the original Alien movie — though not, mercifully, with quite so much gore. 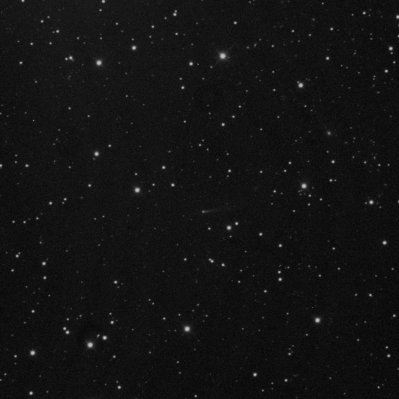 Comet 209P/LINEAR Passes By Earth Tonight
Next Up: Editor's Pick