Bathed in vaporous electric blue lights and the low frequency thump of placeless dance music, Sony’s PlayStation press event at the Los Angeles Memorial Sports Arena on Monday night was, like Microsoft’s Xbox One show earlier in the day, a paean to the company’s shift from hawking hardware to touting games, games and more games for the PS4.

Using a gargantuan wraparound screen — initially inhabited by the company’s trademark whirling squares and triangles, X’s and O’s — Sony opened with an event-exclusive look at one of the year’s most anticipated multi-platform launches, Bungie’s Destiny, rolling a trailer that highlighted the game’s folklorish sci-fi mythology before teasing quick clips of characters doing impossible things. In all, Bungie’s impressively choreographed montage seemed a carnival of sights and sounds, and Sony capped the sequence by teasing both PS4-exclusive game content and a new ivory PS4 bundled with Destiny that’ll be available when the game ships on September 9, 2014.

That focus on visual fidelity and content as well as IP exclusivity set the tone for the rest of the event, which turned into an all-out, software-driven assault on the company’s nearest competitor. Echoing ex-Sony honcho Jack Tretton’s slap at Microsoft last year, Sony Computer Entertainment president and group CEO Andrew House took more than one shot at the Xbox One, claiming that among other things, gaming on the PlayStation 4 “means the highest visual quality” and that games “look better” on the PS4 — a reference to the Xbox One’s tendency to run certain multi-platform games at lower resolutions.

And then the company did what I’d hoped Microsoft might (but didn’t) this morning and foregrounded not just new games, but some totally off the wall ones. Third in line (after a quick new look at Sony’s alternate history action-adventure The Order: 1886), Entwined turned out to be fledgling Sony studio Pixel Opus’s debut game, an adventure of sorts about two souls in love — represented as origami-like creatures in the trailer — that you guide through obstacles (and lifetimes) to bring together, painting the sky and generating your own sculptures in the process. Rounding out the surprise reveal, Sony says the game is available now on the PlayStation Store for $9.99.

After a nod to a new (and unexpectedly standalone) DLC adventure set in Infamous: Second Son‘s universe, Sony unveiled LittleBigPlanet 3, the next chapter in its whimsical puzzle-platformer, only with three new characters — each with unique and complementary abilities that look to broaden the sophistication of the environmental challenges players (and level designers) will face. Sony Worldwide Studios president Shuhei Yoshida took the stage to announce that players had created and shared some 8.7 million levels, cumulatively, across the last two installments, and that they’ll all be playable with improved graphics when the game arrives this November.

We also had our first look at From Software’s new game, the one rumors placed as “Project Beast” before the show, but here titled Bloodborne. The trailer was gory and predictably hair-raising, as well as short on gameplay particulars, but at least we know it exists, and under the direction of Demon’s Souls and Dark Souls esteemed creative lead Hidetaka Miyazaki.

Known multi-platform up-and-comers like Far Cry 4, Dead Island 2, Diablo 3, Metal Gear Solid V, Mortal Kombat X, Batman: Arkham Knight and Battlefield Hardline took their bows, sometimes with nods to bits of exclusive content. Unexpected surprises popped up here and there, like news that Tim Schaefer’s Grim Fandango — arguably one of the finest adventure games yet made — is being remastered exclusively for PS4 and PS Vita. We caught a thrilling glimpse of Giant Squid’s new PS4-only project, dubbed Abzû, an underwater exploration game from Matt Nava (Journey‘s art director) with music by grammy-nominated composer Austin Wintory expected in 2016. And there was confirmation, at last, that Grand Theft Auto V is coming to the PS4 (and Xbox One and Windows) this fall. (I got the latter reveal dead wrong, incidentally.)

The most arresting PS4 exclusive, and this is in line with my point earlier about Sony’s highlighting a number of sui generis games here, was probably No Man’s Sky. We previously saw this game — by indie newcomer Hello Games and then unnamed — at VGX 2013. It’s a sandbox sci-fi whatchamacallit (because who knows what the heck to call it) where you can run around on a planet and do things like classify new species, then get in a spaceship and fly up off-world (continuously, without a loading screen), zip around the galaxy, then zoom down onto other planets. Hello Games took the stage to explain that the game’s universe is procedurally generated, and thus in theory infinite. It sounds and looks magnificent, though there’s the question of whether all that vastness is going to feel like empty sprawl. We’ll see.

There were a few hardware components trotted out during the backend of the show, at least one of them potentially huge: PlayStation TV, the Vita-like micro-console previously available only in Japan, is coming to North American and Europe this fall for $100 (or bundled with a DualShock 3 controller for $130). It’ll let you play Vita games as well as original PlayStation classics, let you stream games from your PS4 to a second TV and offer access to PlayStation Now, Sony’s PS3 games-streaming service, which Sony says will be available in open beta on the PS4 in the U.S. and Canada beginning July 31. Sony also revealed that the first of its original programming efforts, a series based on Brian Michael Bendis’ Powers comic series, will debut this December: PlayStation Network users can watch the first episode free, while PlayStation Plus members get the whole enchilada.

Last up, we had our first look at Naughty Dog’s Uncharted 4: A Thief’s End (absent some of the series’ departed creative leads). The game looks as stunning as you’d expect it to, but we weren’t shown actual gameplay, leaving us guessing. But it was what the audience wanted to see, and in the end, that’s how you score points, and with all the diversity on parade here, Sony may have scored across the board. 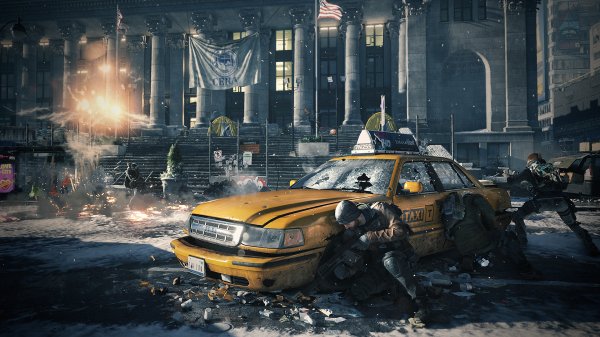 WATCH: The Division Has You Fighting on Deserted New York City Streets
Next Up: Editor's Pick