From left: Philip Matkovsky, assistant deputy under secretary for health for administrative operations at the Department of Veterans Affairs, and Richard J. Griffin, acting inspector general for the Department of Veterans Affairs, testify as the House Committee on Veterans' Affairs holds a hearing to examine why thousands of military veterans have been waiting for up to three months for medical appointments, on Capitol Hill in Washington, D.C., on June 9, 2014.
J. Scott Applewhite—AP
By Mark Thompson

Things are an even bigger mess at the Department of Veterans Affairs than we thought.

An internal investigation released Monday into the secret waiting lists and other chicanery that kept veterans from receiving timely care is like a Chinese firecracker that keeps exploding with every turn of its 54 pages:

— More than 100,000 vets have experienced waits longer than 90 days for medical care. That includes 57,000 who are waiting 90 days or more for their initial appointment, and 64,000 who requested appointments over the past decade and never got them.

— More than three of every four VA health-care sites—76%— entered different appointment dates than those sought by veterans, usually under orders from a superior.

—13% of VA personnel scheduling appointments had been instructed to log appointment dates that differed (i.e., were later) from the one sought by the vet. That made wait times appear shorter.

— 8% of schedulers created off-the-books wait lists that some VA officials have described as secret. They were spread across 70% of the facilities surveyed, which included all of the VA’s major hospitals.

— Efforts to make the system work “led to an overly complicated scheduling process” that made fudging easy.

— The 14-day goal of an initial appointment for a vet seeking care “was simply not attainable,” the report said. “Imposing this expectation on the field before ascertaining the resources required and its ensuing broad promulgation represent an organizational leadership failure.” The 14-day target, which played a role in job evaluations and resulting bonuses, has been scrapped.

“Organizational leadership failure” is investigator-talk for Secretary Eric Shinseki, who resigned May 30 after the VA inspector general found, in a May 28 report, that such problems more widespread than Shinseki thought—but not as widespread as the latest report makes clear. Shinseki blamed a “totally unacceptable lack of integrity” for the rampant cheating on his watch.

“Individual questions were not worded to ascertain the reason that policy may have been violated,” the report noted. “Therefore, findings from this audit cannot be extended to identify deliberate deception, fraud, or malfeasance.”

The report set off another round of criticism from lawmakers and veterans’ groups. “The fact that more than 57,000 veterans are still waiting for their first doctor appointment from the VA is a national disgrace,” House Speaker John Boehner said.

“We must work together to fix the unacceptable, systemic problems in accessing VA healthcare,” Sloan Gibson, the acting VA secretary, said following the report’s release. “This data shows the extent of the systemic problems we face, problems that demand immediate actions.” The late appointments and resulting delayed care have been linked to as many as 40 veteran deaths in the Phoenix VA facility alone.

“This is not just ‘gaming the system,'” said Daniel Dellinger, national commander of the American Legion. “It’s Russian Roulette and veterans are dying because of the bureaucracy.”

Roughly 400 senior employees from the Veterans Health Administration, which runs health-care facilities for the VA, interviewed, between May 12 and June 3, nearly 4,000 of the VA’s 30,000 junior workers involved in scheduling appointments. “Site survey teams were not able to interview all employees, and time did not allow assessment of intent or potential culpability,” the report noted. “All of the information collected from audit site visits has been shared with VA’s Office of Inspector General,” which is conducting a parallel probe that could lead to criminal charges.

The three reasons VA employees gave for the lengthy waits were lack of doctors, the 14-day goal, and inadequate clerical help.

On May 15, the VA had more than 6 million scheduled appointments, with 5.8 million of them—96%—slated to take place within 30 days. It also had 63,869 veterans who requested an appointment to enroll in the VA system over the past 10 years “for whom an appointment has not yet been scheduled.” There are an additional 57,436 vets slated to wait 90 days or more for their initial appointment.

The VA plans to extend clinic hours, pay overtime to its staff, take steps to improve productivity and get additional help from outside the VA to tackle the backlog. “As of today,” acting VA chief Gibson said Monday, “VA has contacted 50,000 veterans across the country to get them off of wait lists and into clinics.” 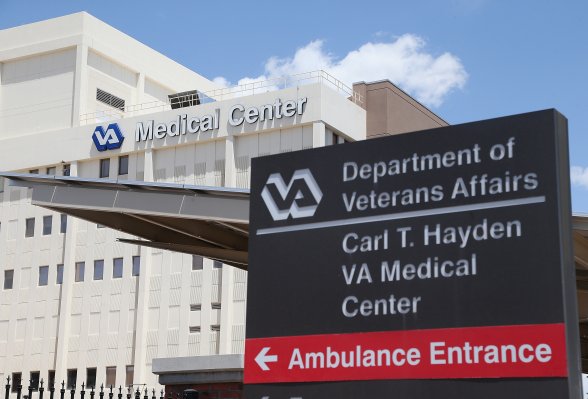 Demand for Care Spikes as Veterans' Ranks Fall
Next Up: Editor's Pick