Nintendo's Shigeru Miyamoto demonstrates the new control scheme in Star Fox for the Wii U.
Nintendo
By Matt Peckham

Behind closed doors, surrounded by half-emptied pallets, whizzing forklifts and all the chaotic scaffolding and hustle of E3 2014’s pre-show preparations, the creator of Donkey Kong, Mario, Zelda and more drew back the veil Sunday night on some of the experimental work he’d alluded to years ago when he told Wired he was shifting gears to work on smaller, more personal projects.

In one of the games, which Miyamoto called Project Giant Robot, players control sky-scraping automatons, angling the Wii U GamePad in front of a TV screen while shifting their torsos left and right or up and down to maneuver the robot’s upper-body while thumbing the controller’s joysticks to punch or grab — almost like a full-body game of Rock ‘Em Sock ‘Em Robots. The GamePad shows you what the robot sees, while the TV screen offers a zoomed-back view, letting onlookers — as well as you — admire your tromping, pummeling handiwork.

In another, titled Project Guard, the GamePad became a quick-jump map of a fortress manned by numbered, laser-firing security cameras. As robots encroach on different entry points, you have to tap the GamePad to leap from camera to camera, blasting enemies that trundle or come at you sprinting — even some that sneak under your radar. All the while, onlookers can shout out the numbers that correspond to robot-threatened camera feeds, turning your defense operations into a frenetic, heart-racing, tap-and-fire scramble.

And the third project? A game Nintendo fans have been waiting for a very long time to see: Star Fox is back, only reimagined on the Wii U using Miyamoto’s new GamePad-based controls — controls that’ll ask of players things they’ve never had to do before in a video game. Whether they’ll come willing or balk remains to be seen, but Miyamoto is convinced he’s on to a control scheme that’s not only novel, but with practice, indispensable.

In his new version of Star Fox — still fundamentally a spaceship-based shooter — players now use the GamePad’s motion controls to aim and fire the Arwing’s weapons, simultaneously controlling the nimble craft itself by thumbing the joysticks to accelerate or turn and pull off signature moves like barrel rolls, loops and the tactically essential Immelman turn. And you can still morph your Arwing into a land tank, rocketing down to the surface of a planet, then rattling around the battlefield and laying waste to the landscape.

But Miyamoto and his team have added a new vehicle mode, one that’s designed to exemplify the new motion control scheme: It lets up to two players pilot a helicopter-like craft, one player controlling the helicopter itself, the other controlling a tiny robot you can drop from a tether to roll around a limited area, either snatching up booty or blasting enemies. Leave the robot hanging as you fly around the battlefield and it becomes a kind of dangling, swingable cannon.

Project Giant Robot and Project Guard are still considered experimental at this point, and Star Fox is at least a year away, but I had a chance to sit down with Mr. Miyamoto after trying all three. Here’s what he told me.

Would it be fair to see Project Guard as partly a riff on the tower defense genre, where you’re making your defense preparations then defending from attackers that advance in waves?

We didn’t really think of it from a genre perspective. Project Guard was one that we actually began experimenting on back in the Nintendo 64 era, around the time that we were doing things with the original Luigi’s Mansion. But on the N64, we didn’t have enough processing power to bring the game to life. So we set it aside, and then we came back to it on Wii U, and particularly with the Wii U GamePad, it made the interface much more intuitive. So we decided to then bring that project back to life on Wii U. We didn’t take into account any current genres in designing the game.

In the game you can place cameras before initiating the robot assault. I only had a few minutes to fiddle with this during the demo, but I’m not sure I would’ve figured out how to optimally position those cameras even if I’d had more time to. Do you intend to teach the player, somehow, so they’ll know or be able to learn how best to position the cameras?

I don’t know if this is the correct answer to what you’re asking, but if you noticed at the end of the match on the GamePad, there was a display that showed where the enemies came out and when they came out, and it showed you which enemies got to the middle of your base. That screen is set up in a way that’s very easy for players to edit the patterns themselves.

So you can play in the same maps over and over again, and create your own enemy patterns for a single map. And so then, as you’re playing, the more you play the game, the more you learn with each different pattern of enemy attacks where the best camera placements are.

How long have you been working on the new Star Fox game?

We originally began working with Star Fox back on Wii, and we had a small group of people experimenting with it for many years, maybe about six years, but we didn’t find an idea that really brought that together for the Wii. So instead we moved experimentation to the Wii U using some of the same assets. It’s been maybe 6 to 10 months that we’ve been experimenting with it.

One of the things that stood out to me about the new Wii U and GamePad functionality in Project Giant Robot and then Star Fox is that you’re having to execute two or more maneuvers in 3D space simultaneously, moving the GamePad to aim and the control sticks to maneuver. It took a while to get used to, and I’m still not sure I got it. Is there an intentional learning curve there?

Yeah, I think that’s safe to say. When we were developing a game, I wind up playing it for many hundreds of hours, and so because of that, I tend to get a little further away from the experience people have when they’re playing it for the first time. But that’s something we always pay attention to when we’re developing the game, and in this case I think Star Fox will be a game you spend a little bit of time getting used to the controls, but that once you do, then you’ll understand what’s fun about that experience.

I don’t think it’ll take a lot of play time for people to get used to it. For most people, it’ll take maybe 30 minutes to an hour. So from that standpoint it’s not a game that’s particularly well-suited to displaying at a show like this, where you only have a short amount of time to play, so that’s why we held the event yesterday, to get everyone in to play for a longer period of time than they might normally.

And then I also think that for a lot of people, they don’t have experience playing this sort of dual-screen gameplay, where you’re aiming with motion control and playing across two screens at once, so that also is maybe taking people a bit longer to get used to. But I look at video games as something that people who play them… One of the thing they enjoy is learning the controls, learning to master the game. And once they do, that sort of opens it up for them, they’re thinking about, “Oh, what’s this play style?” And then as they get deeper and deeper into the game and get better at it, they feel that sense of accomplishment having mastered it.

And then once you get used to the play style… I didn’t go into this detail the other night because it starts to get a little bit complicated, but once you get it, you’ll also be able to press a button to switch the view from one screen to the other. So you could play with the cockpit view on the TV and the fighter view down on the GamePad screen if you feel like that’s a better way to play.

With the 3DS, you can see both of the screens easily at once. With the Wii U, you often having to look from one to the other. There’s a lot of visual information to process in these new multiscreen Wii U games.

With Star Fox, one thing we’re doing is to make the game feel like you’re piloting your own aircraft. And so in that sense, probably initially one of the best ways to play is to have it up in front of you, in your line of sight from the TV. But also as I’ve been playing Star Fox more and more, what I’ve noticed is that it gets easier to play the game looking at the TV with the GamePad down. So as you get better, you’re gradually able to depart from holding it up.

In the case of the Arwing spaceship, if you have two pilots, they’re most likely going to be sitting front-to-back, and you’ll have one piloting, the other able to look around. When you have someone piloting but someone else who can look around, what’s most beneficial to the person who’s looking around is the ability to look down below. In designing the Arwing we couldn’t quite think of a good way to have to redesign it so you’d have one player who could look down below. Thus we decided to create the helicopter.

You said at the event that all of these games might be related. In what way? As part of a single Star Fox game? Or as something more multiform and arcade-like, like Nintendo Land?

Honestly I don’t have a clear idea myself yet, but one thing I’m thinking is that with this Star Fox we may take a different approach, so that rather than one big title we have multiple releases that are connected through different missions. If I was to describe the Star Fox series up until now as being sort of a movie series, I guess I’d describe this new approach as something that’s more like a TV series for Star Fox.

Update: Due to a production error, this article was temporarily published ahead of an embargo. 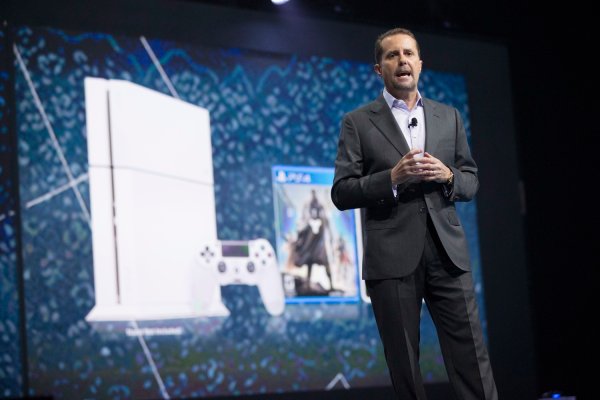