Prayer is often one of the few acts that can cross religious and political divides, no matter how deep. But last week, the president of the Family Research Council criticized Planned Parenthood Federation of America for reaching out to women in the name of God. “Women are used to Planned Parenthood preying on them—but praying on them? That’s a new approach altogether,” Tony Perkins wrote on the FRC website. “Obviously, [Planned Parenthood] is always looking for new ways to justify abortion. But the Bible? That’s a step too far, even for them.”

Perkins was responding to a Planned Parenthood “Pastoral Letter to Patients” written by the group’s 15-member Clergy Advocacy Board and posted online. “Many people wrongly assume that all religious leaders disapprove of abortion,” the letter reads. “The truth is that abortion is not even mentioned in the Scriptures—Jewish or Christian—and there are clergy and people of faith from all denominations who support women making this complex decision.”

That message, Perkins felt, crosses a line. “Is Planned Parenthood so desperate for business that it has to spiritualize the murder of tiny children?” he wrote.

“We felt it was time to weigh in and make sure that our supporters were aware of Planned Parenthood’s latest tactics,” Perkins tells TIME.

Planned Parenthood’s pastoral letter, however, wasn’t actually new. It has been on the group’s website since October 2013, and it is part of a group of clergy’s longstanding efforts to support Planned Parenthood affiliates and patients. The group’s Clergy Advocacy Board spans a range of Christian, Jewish, and Muslim traditions, and while the religious groups have their own particular views about abortion, they share the view that God loves women no matter their decision about a pregnancy. “We believe that clergy have a special responsibility to bear witness in support of reproductive rights so that the public and their elected representatives may understand the theological and moral basis for reproductive rights,” says the Clergy Board’s statement of beliefs. “The decision about abortion is a matter between a woman, her conscience, and/or her God, and that those close to her should offer support in any way they can.”

Three clergy board members—the Board’s chair, Reform Jewish Rabbi Jon Adland of Canton, Ohio; vice-chair Rev. Susan Russell, of All Saints Episcopal in Pasadena, Calif.; and Reform Jewish Rabbi Dennis Ross of Concerned Clergy for Choice in Albany, N.Y.—responded to Perkins’ criticism against their work in a statement to TIME. “Too often, the voices of negative religious discourse around abortion are those that loudly proclaim their teachings are the only ones that are valid,” they say. “They try to shame and judge women who are making deeply personal and often complex decisions about their pregnancies.”

For these Christian and Jewish leaders, their efforts far from spiritualize abortion–they defend a woman’s religious liberty. “As clergy members, we work every day to make clear that everyone is entitled to follow their own conscience and religious beliefs; what they don’t have the right to do is impose those beliefs on everyone else,” they say.

As ministers, they also believe they also have a spiritual responsibility to care for and counsel families in their communities. “As faith leaders, we recognize that women need to be supported and receive compassionate care while making deeply personal decisions based on faith and conscience,” they say. “It is important that women know that there are people of faith who respect a woman’s ability to make these deeply personal decisions in consultation with her family, her doctor, and her faith.”

The spat again revives the culture war debate over who can claim the Bible, and ultimately, who can claim that God endorses their cause. The majority of white evangelicals, Mormons, and Hispanic Catholics believe abortion should be illegal in all or most cases, according to the Pew Research Center, while the majority of white mainline Protestants, white Catholics, black Protestants, Jews, and unaffiliated believe abortion should be legal in all or most cases. 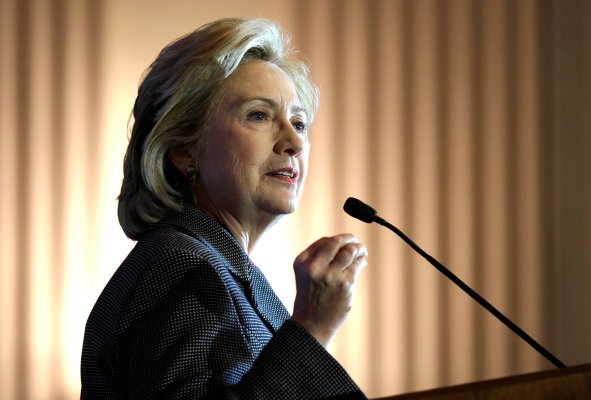 Clinton Defends Paid Speeches: We Were 'Dead Broke'
Next Up: Editor's Pick