I love your work. Who doesn’t? Clearly nobody, since you just won a record-obliterating sixth Tony for your performance as Billie Holiday in Lady Day at Emerson’s Bar & Grill. Congratulations. That’s an incredible feat.

And don’t get me wrong, I love that you thanked your parents before anyone, the folks who got you your start in the theater. “I want to thank my mom and dad up in heaven,” you said in that seriously kick-ass red-and-white gown, “for disobeying the doctors’ orders and not medicating the hyperactive girl and finding out what she was into instead and pushing her into the theater.”

I have kids too. Should they happen to ever achieve a modicum of success, I’d like to think they might thank me one day. Not publicly from a podium or anything, but maybe just from their desk, or whatever place of work they happen to land upon. Here’s the thing, though: I really want them to have jobs. Unlike your family, of whom you once joked that if you were “tone-deaf they would have kicked me out,” I’m not musical. Unlike you, my kids do not have five aunts in a professional gospel-singing group. (My brothers did have a band. If memory serves, my mother called them the Unlistenables.)

But here’s the thing: one of my kids doesn’t learn very well without the meds. We’ve tried the theater, sports, music, wearing him out, getting him more sleep, meditation, diet, being super-disciplinarian, being not too disciplinarian, art, bribery and shouting. We even tried chewing gum for a while. Oh, man, that stuff is hard to remove. We tried a lot of techniques, some of them more seriously than others, because we are human and have jobs and other children. But the thing that worked best, that enabled him to learn to read and stopped him from getting into trouble at school, was medicine.

Since completing school and getting a job are pretty tightly linked, our options are limited. Since employment and having a family, or a home or a healthy mental attitude, have also been linked, the parent of a child who has trouble learning can begin to get very anxious. Nobody, as I’ve said before, is thrilled to medicate their child. It’s not what anybody considers a huge parental triumph. We have no trophy cabinet for the expired bottles of methylphenidate. But if you don’t have a child whose talents are as prodigious and obvious as yours, it can be tough to figure out what’s best for them. So you’re left with trying to avoid what’s worst; and clearly not being able to learn is pretty high on that list.

I’m sure that you were not personally judging me and other concerned parents when you thanked your parents for not putting you on Ritalin. I’m sure you weren’t trying to prescribe from the podium. And obviously, you have thrived, against some serious odds. But damn it, you’re not making it any easier to live with our hard decisions. There’s anxiety and then there’s Audra-induced anxiety, which is more dramatic and accomplished than the regular sort. I’m equally sure your parents also drove you to rehearsal a lot, or ran lines with you, or calmed you down if you had stage fright, or told you not to chew your nails. You couldn’t have mentioned that instead?

The chances of anybody winning six Tonys are extremely slender (again, bravo). If by giving my child medication, I have reduced his chances of getting that gong even further, so be it. He may not be Audra-level awesome, but he’s going to get through school. I’m O.K. with that. 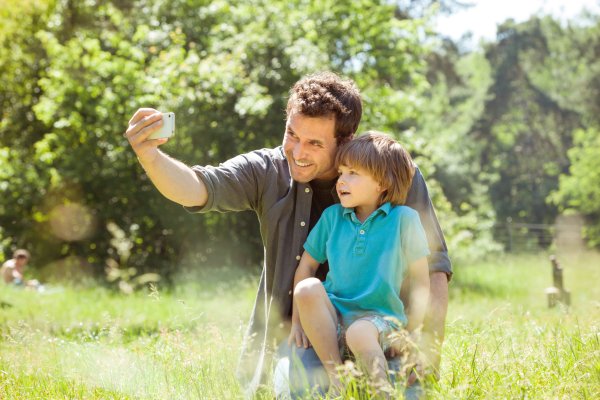 Dads Claim They're Pulling Their Weight at Home
Next Up: Editor's Pick