What Men Can Learn From Orange Is the New Black

Orange Is the New Black reaffirmed its position as Netflix’s best — and most watched — original series with the premiere of its second season. But I fear that the predominantly female cast will scare men away from the show. It shouldn’t. As critics have said over and over again, this isn’t a show about women for women: it’s a show about people. It humanizes a population society often pretends doesn’t exist and addresses universal problems like racism, money, addiction, love, betrayal and sexuality.

If that doesn’t convince you, here are nine reasons dudes should tune in to the second season, which some critics are calling even better than the first.

In one episode, a male character brags about giving his girlfriend a vaginal orgasm: “Do you know how hard that is?” he asks. Characters on OINTB skip the innuendos in favor of real discussions about straight and gay sex: What’s the best way to please a woman? What’s it like to have sex while you’re still lactating?

And for straight men with questions about the female anatomy, there’s an explainer from Sophia, a transgender woman who paid for and designed her own vagina. She draws a chart to teach other inmates what their female-only equipment actually looks like. It’s useful to say the least: a guard, overhearing the conversation, applies his knowledge later with his own girlfriend.

2. It’s not all about “white girl problems.”

Creator Jenji Kohan has often talked about how the series’ nominal main character—skinny, rich, white Brooklynite Piper—is a “trojan horse,” used to smuggle the audience into the prison so she can tell the real story: the complicated lives of a diverse set of characters. OITNB probably has the most diverse set of characters on television right now in terms of race, sexuality and socioeconomic status.

Those who were turned off by Piper’s rude awakening as she adjusted to prison last season will be happy to see her character take a backseat to different types of stories. We learn how one character fell into a life of drug dealing after leaving her group home, how confronting homophobia shaped another’s life and the sad tale behind another’s romantic delusions.

And Piper has gotten perspective too: while her friends on the outside wait hours in line for a “bagnut”—a combo bagel-donut—Piper spends her time scouring the prison floors for a cockroach capable of carrying a cigarette to another cell. And a new character who whines about sustainable food reminds Piper (and the audience) of just how spoiled our main character used to be.

3. This is no Sex in the City fashion show.

The characters wear orange or tan jumpsuits the whole time, so there’s no talk of fashion and the only conversations about makeup involve complex plans about how to smuggle in contraband like lipstick.

4. It has all the violence, bank robberies and drugs you would want from a men’s prison show.

Want to see people murdered over drug deals? Inmates beating one another with socks filled with locks? Bank heists? Embezzlement? It’s all here, but with a woman’s touch: some prisoners brilliantly smuggle cigarettes to each other inside tampons because they know the male guards will never look there.

5. Women can be just as terrible as men.

See above: it’s the women who are doing the beat-downs and drug dealing in this show: some with good reason and some because they’re just greedy, heartless people.

Some characters are even “terrible” in more mundane ways. Two of the prisoners engage in what we traditionally would think of as frat boy antics when they start a competition to see who can sleep with the most women in the prison—more points are awarded for bedding aloof targets. One character even tries to pimp out another prisoner in exchange for a blanket.

6. Plotlines about realistic LGBT characters are explored, not exploited.

A number of popular series have plots in which a straight woman experiments with kissing or having sex with another woman (The O.C., Friends) or the woman’s sexuality is up for debate (The Good Wife, Glee), but these issues wind up seeming like plot devices and there are rarely any confirmed, out-of-the-closet lesbians. Though Piper’s sexuality remains fluid, lots of other characters on the show are actual lesbians. Others are confused (the whole “gay for the stay” concept is explored). Last year even featured an episode devoted to a transgender prisoner named Sophia (Laverne Cox), flashing back to her struggles with her family as she transitioned. In short, the audience gets to see a whole range of sexuality.

Pablo Schreiber (L) and Matt McGorry (R) in a scene from NetflixÕs ÒOrange is the New BlackÓ Season 2.
Ali Goldstein—Netflix

7. The portrayals of men are complex and fair.

Though popular culture asks women to identify with men in movies and TV all the time (because there are no women or at least no relatable women), rarely are men put in a position where they have to identify with a woman onscreen. I understand the jump can be tough. So who can a male viewer align himself with?

I’ll admit last season all the men, save one, kind of sucked. They were sexist or vindictive or powerless or just plain rape-y. But this season we get a little more insight into these men’s motivations, their backgrounds, their problems. Even a universally reviled guard gets a little sympathy thrown his way this season after being framed for a crime last season.

8. It passes the Bechdel Test without hitting you over the head with it.

It may seem obvious that a show about a female prison is going to pass the Bechdel Test—a simple quiz that asks if two female characters talk to each other about something other than a man. And while this test should not be the arbiter of whether something is good or not, you’d be surprised how few female-centric TV shows and movies actually accomplish this very basic feat (looking at you, The Other Woman).

But Orange Is the New Black doesn’t take time to bask in its overt feminism. It’s too busy telling interesting stories to pause and remind you that women are doing things you don’t usually see women do on TV.

9. This is how female friendships actually work.

Even complex shows starring women will often have you believe that female relationships are built discussions about who slept with whose husband. And while one OINTB storyline follows an affair this season (I won’t say who), the triviality of the side plot highlights how stupid this traditional drama over a man’s heart is when we could be watching dramas about real problems like poverty and race politics. The most compelling plots on the show follow the friendships of the women in prison as they come together and fall apart. They are full of real human emotion and pain and vengeance. 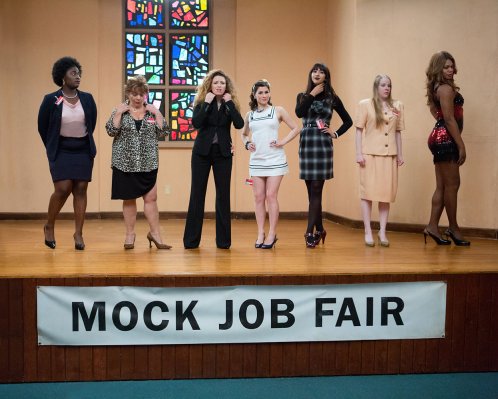 <i>Orange Is the New Black</i> Finally Returns
Next Up: Editor's Pick