Taliban gunmen besieged Karachi airport on Sunday, killing at least 23 people. Kamal Faridi, a 29-year-old Information Technology entrepreneur based in Karachi, was traveling to Germany via Dubai on Sunday night and got caught in the melee.

Faridi had checked in for his Emirates flight around 11pm on Sunday, and was waiting in the lounge for the boarding announcement. “Suddenly we heard some gun shots, which we thought were fireworks,” Faridi told TIME. “Then we saw the security forces taking position outside the lounge.”

“They asked us to lie down on the ground and hide ourselves against the furniture as the lounge was covered in glass. In another 10-15 minutes more security personnel had arrived and huddled us to another room.”

“Initially there was pure chaos as we didn’t know what was happening and everyone thought they were going to die. Within ten minutes we were told of the terrorist attack.”

The commandos told Faridi and his fellow travelers that some unidentified gunmen had taken control of the old terminal – which is more like an administrative wing and only caters to VIP and Hajj flights – which lies 2-3 kilometers away from where Faridi was waiting to board his flight. The old terminal had no passenger flights, fortunately.

Faridi said a “resigned, even fearful calm” fell upon the room where they were waiting. “Apart from the whimpers of children, it was quiet, only to be broken by a loud cheer of ‘Allahu Akbar’ when we heard on the security force wireless that a few of the terrorists had been shot down.”

“We were instructed not to receive calls or take pictures,” he said. “We lay crouching on the ground for almost 4-5 hours, by which time the security forces had announced thrice that they would evacuate us, but weren’t able to.”

“Crouching on the ground, shutting my ears and sometimes eyes tightly, I could still see the flashes of gun shots. They would stop for a second and it would all be a deathly quiet before it would start again in an interminable shower.”

Around 3.30am one of the officers came to evacuate Faridi and his co-travelers. Shaken, Faridi went straight home.

“In Pakistan it’s almost a war situation. Everyone knows anything can happen any moment and we are prepared for any eventuality,” he said. “But it’s different when you find yourself in the middle of a terror attack. The five-hour ordeal was a trauma for me. If I close my eyes I can still hear the shots ringing out and I jump in my mind.” 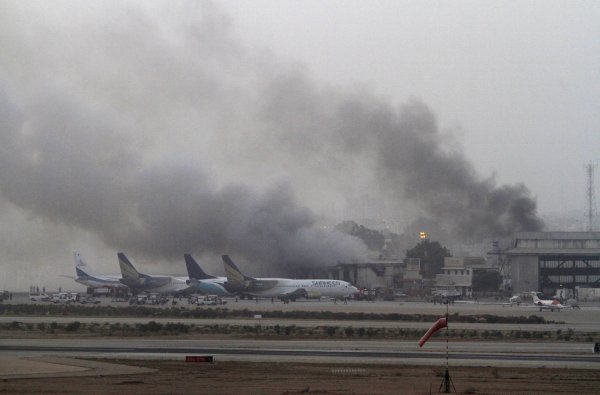