If the gods of theater wanted to create a perfect Broadway star, they couldn’t do better than Audra McDonald. She sings, she acts, she tears up every time she wins an award. And she wins them constantly. On Sunday night, she snagged a record sixth Tony — the most ever received by an actor — for her spot-on impersonation of Billie Holiday in Lady Day at Emerson’s Bar and Grill. What’s more, since Lanie Robertson’s re-creation of one of Holiday’s last club appearances was classified as a play and not a musical, McDonald became the first performer ever to win a Tony in four different acting categories — lead and featured actress in both musical and play.

Next year, Harvey Fierstein willing, she may be vying for best actor.

McDonald aside, the Tony voters spread the love around at Sunday night’s annual award gala from Radio City Music Hall. The award for best musical, the night’s most anticipated contest, went to A Gentleman’s Guide to Love and Murder, the frothy show about an English heir who bumps off all his relatives to win a family fortune. But the musical — which took home four awards in all, including best director and best book of a musical — seemed a bit of a default choice. In a year when the most high-profile and highly anticipated Broadway musicals (Rocky, The Bridges of Madison County, Bullets Over Broadway) were denied top nominations, A Gentleman’s Guide was the only of the four nominees that even qualified as an entirely new musical. (The others: After Midnight and Beautiful: The Carole King Musical, both of which featured recycled songs, and Aladdin, whose score was mostly repurposed from the Disney animated film.)

The Tony audience seemed to show more enthusiasm for some of the other winners. The award for best actor in a musical went to Neil Patrick Harris, the popular four-time host of the Tony show, who won raves for playing a transgender East German cabaret singer in the revival of the off-Broadway rock musical Hedwig and the Angry Inch. And the best actress award went to sentimental favorite Jessie Mueller, who plays Carole King in Beautiful — and who beat out some of Broadway’s most high-powered musical stars, including Kelli O’Hara (Madison County), Sutton Foster (Violet) and Idina Menzel (If/Then).

In a weak year for Broadway dramas, the winner for best play also seemed a dutiful choice: All the Way, Robert Schenkkan’s earnest but rather pedestrian account of Lyndon B. Johnson’s first year in office. The play’s star, Bryan Cranston — making a smash Broadway debut after his career-defining role on TV’s Breaking Bad — was a more fitting (and expected) winner of the award for lead actor in a play.

If there were no big hauls on the night (no show got more than four awards), several shows came through with satisfying wins. Though Denzel Washington was denied a nomination for his strong starring role in the revival of A Raisin in the Sun, the show itself won three awards: for best revival, best director (Kenny Leon) and featured actress (Sophie Okonedo). The Globe Theatre’s acclaimed all-male production of Twelfth Night won the award it was destined to win — best featured actor in a play for Mark Rylance’s showy drag turn as Olivia. James Monroe Iglehart, as the genie in Aladdin, won for featured actor in a musical — some rare Tony love for a Disney cartoon-to-stage adaptation. And Jason Robert Brown won a deserved award for his fine score for the otherwise troubled (and now closed) The Bridges of Madison County.

The awards telecast itself was a bumpy affair. Host Hugh Jackman began the show with a choreographed opening that had him hopping like an animated pogo stick as he greeted all the nominees backstage before starting the show. (He redeemed himself later with some clever musical introductions of the nominees for acting awards.) And the show looked more than ever like a shameless infomercial for Broadway.

Just a few years ago there were impassioned debates in the theater community over which shows deserved featured spots. First it was only best-musical nominees; then revivals were allowed in as well. Now virtually every musical with enough clout seems to get in on the action. The evening included numbers from nonnominees like Rocky and Bullets Over Broadway; a tribute to the long-runner Wicked; and even scenes from shows that haven’t yet come to Broadway, like Sting’s The Last Ship and Finding Neverland.

Who says Broadway doesn’t have a big heart? Or at least a shrewd marketing team. 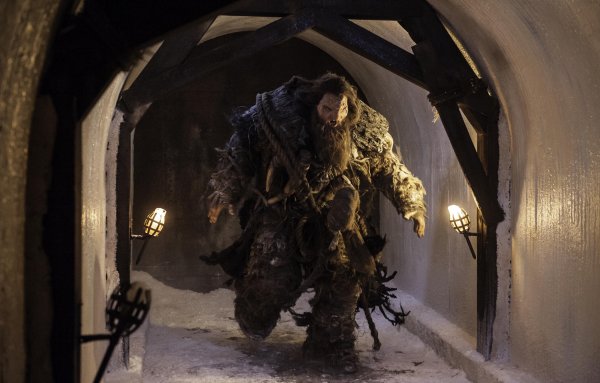