At the very hour Pope Francis sat with the Presidents of Israel and the Palestinian Authority in the garden of the Vatican, filling a soft June evening with the very best of intentions, more immediately meaningful events continued to unfold in the Middle East.

In Israel, the leader of the pivotal faction in the ruling coalition unveiled his own roadmap for peace — embracing the gritty specifics of the conflict that the Vatican “invocation for peace” avoided. Yair Lapid, who holds the title of Israeli Finance Minster and controls the Yesh Atid party that claimed the crucial centrist vote in the 2013 election, threatened to bring down the government of Prime Minister Benjamin Netanyahu if Israel moves to annex any of the West Bank, the Palestinian territory that, along with the Gaza Strip, would form a proposed Palestinian state.

Lapid urged the resumption of negotiations that fell apart in April, pointedly calling for Israel to prepare a map of its own boundaries — something American and Palestinian officials have said Netanyahu has refused to do. Lapid also called for a freeze on construction of Jewish settlements deep in the West Bank, beyond the so-called blocs that under most scenarios would become part of Israel in a final arrangement. “There is no reason to keep avoiding the necessity of drawing out the state of Israel’s future borders,” Lapid said.

Meanwhile, in Egypt, the former field marshal Abdul Fattah al-Sisi was sworn in as President. In his first speech, he declared battling terrorism Egypt’s top priority, an approach that rewards moderates in the Palestinian camp. Al-Sisi has taken aim at Hamas, a branch of the Muslim Brotherhood that he removed from government last July. Badly weakened, Hamas has formed a “unity government” with the Fatah Party of President Mahmoud Abbas, who sat beside the Pope on Sunday, fresh in from Cairo.

Abbas’ presence was one of the few tangibly political impacts of the nominally apolitical session, which Pope Francis had announced during his visit to the Holy Land two weeks ago. Abbas was received, and thus validated, as head of a unified Palestinian government, one staffed by technocrats but supported by Hamas, which Netanyahu says disqualifies it as a negotiating partner because the group has failed to acknowledge Israel’s right to exist. Even Israeli President Shimon Peres expressed skepticism of the reconciliation on Sunday, saying that Hamas’ history of terrorism was an impossible contradiction from Fatah’s renunciation of violence: “You can’t have water and fire in the same glass,” Peres told reporters.

But Washington, the E.U. and the U.N. continue to work with the interim government, and Abbas’ presence in the stately setting, embraced by the charismatic Pontiff, carried a symbolic weight.

And symbolism was everything in Rome. The 90-minute program, made up entirely of prayers interlaced by classical music, inverted the customary order of Middle Eastern diplomacy. Instead of pageantry occasioned by an agreement, the event offered stately ceremony as incentive, or perhaps a reminder, to two sides that have not negotiated in earnest since 2008.

Rabbis, priests and imams spoke in turn. And if the Muslim prayers dwelled more on justice (as the faith itself does), and Abbas more than once invoked Jerusalem (“Oh God, we ever praise you for making Jerusalem our gate to heaven”), the skein of grievance was subtle enough not to disrupt the occasion. Abbas, though head of a faction routinely described as secular, often flips open a well-worn Koran on the flights between the world capitals where he is received as a statesman, albeit one without a universally recognized state.

But it was Pope Francis who said, “To have peace, one needs courage, far more than you need for a war.” And it was the Ecumenical Patriarch of Constantinople who read from Isaiah, “They shall not labor in vain, or bear children in calamity.” The black-clad Orthodox cleric Bartholomew I had prayed with Pope Francis in Jerusalem two weeks ago, where the Pontiff had come to celebrate the 50 years since a predecessor had formally ended 900 years of hostility between the two branches of the church. On Sunday, when the prayers ended, Francis pulled the onetime nemesis to his side for the group photo.

There the two churchmen stood, one in white, the other in black, side by side between the Israeli and the Palestinian, showing it can be done. 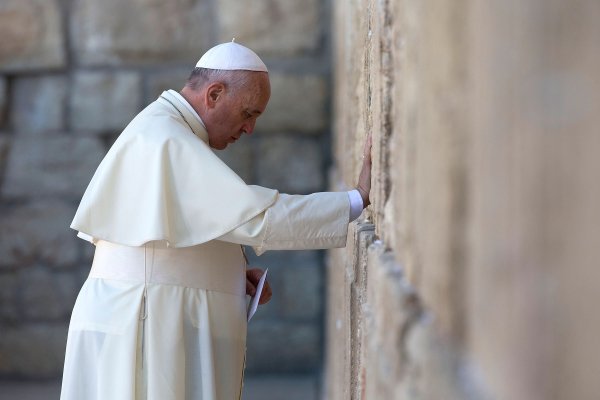 Pope Declares 'Zero Tolerance' Toward Sex-Abuse
Next Up: Editor's Pick