“The Watchers on the Wall” was an episode of Game of Thrones in which there was a hell of a lot of action and yet very little happened.

I don’t mean by that to slight Neil Marshall’s direction of The Battle of Castle Black, the visual effects (some of which, like the giants and mammoths attacking the gate, were stunning for an episode of series TV), or the power of Ygritte’s dying in Jon Snow’s arms. (And who wasn’t mouthing, “You know nothing, Jon Snow,” before she even gasped it out as her last words?)

But contrast “Watchers” with season two’s “Blackwater,” one of the series’ finest hours and the last episode dedicated wholly to one location in and around a massive battle. That episode, in which Stannis Baratheon’s seemingly unstoppable naval assault on King’s Landing turned into a rout thanks to Tyrion’s ingenious smoke-on-the-water defense, It was not only a visual spectacle but a decisive moment, in which Stannis’ forces were decimated and the Lannisters’ hold on King’s Landing secured. And on top of that, it was a powerful character study, as we saw the Lannisters face the possible end of everything: Joffrey succumbing to cowardice, Cersei considering a quick end with poison, Tyrion rescuing an ungrateful family despite himself.

“Watchers,” on the other hand, gave us the greatest sheer spectacle Game of Thrones ever has, but in the service of what turned out to be a thoroughly indecisive battle. The wildling rearguard attack is halted, at the cost of many lives, including the north’s favorite ginger, Ygritte. Mance Rayder’s nighttime assault is repelled, after the unleashing of mammoths, fire, a harpoon-like giant’s arrow, and a wickedly ingenious “scythe” slicing climbers from the Wall’s face. But when it’s all over and the bodies are being stacked in piles, a haggard, heartbroken Jon Snow tells us that it was not the end of a war but just a skirmish–and a tiny one considering the forces Mance has at his disposal. The only way to win is to find Mance–so, tune in next week, and add one more agenda item to what is looking like a very crowded final episode.

In a way, this kind of resolution (or lack thereof) fits the fight at the Wall, emphasizing the sadness and waste of this battle. This, after all, is not a fight between royal houses for control of a kingdom. It is, when you come down to it, a battle between two desparate sides for survival. The Night’s Watch are the wretched refuse of Westeros, sent to the end of the world generation after generation to defend a thankless realm against White Walkers. Mance’s army is a horde of dispossessed clans, locked out of the prosperous South for centuries, driven to attack the Wall by the promise of zombie death if they don’t.

We may have a rooting interest here, but when it comes down to it, it’s a battle of have-nots pitted against each other for the sake of survival. And as Jon essentially says, a brave night and a few neat tricks with burning oil won’t change that. This is an army that will fight as if it has nothing to lose, because it does.

And yet if the episode took us to the Wall for a full hour without settling anything, it looked damn pretty doing it. Reviewing action in a way is like reviewing comedy: it risks becoming simply, “Remember that scene? And that one?” But Marshall did the battle proud, especially in laying out the spatial relation between the fight at the south and the Wall defense to the north–our vantage point climbing and descending the ice face over and over. Although the earlier episodes has made the wildlings look like a small renegade band–not unlike the raiding Vikings in the old Capital One ads–the faceoff at the Wall has impressive and appropriate scale. And there were what had to be difficult close-combat scenes within Castle Black to film, the camera weaving around and about the warren-like quarters in long, uninterrupted shots.

The mammoths and giants may be the visuals that stick with me from “Watchers,” but some of the most affecting scenes took place away from combat–most of them involving Sam (John Bradley), who had a standout episode. Jon may have the sword skills and hair to die for, but it’s Sam–bookish, sweet, exiled by a hateful father–who is our companion to a battle he has no business fighting. Promising Gilly that he’ll survive, giving courage to (the sadly doomed) Pyp, chatting about the ladies with Maester Aemon, Sam gives us something that’s been in short supply: hope.

Sam may not have a Valyrian-steel sword, but he has the ability to screw up his courage and fight through fear–and in Gilly, he has someone to survive for. “Love is the death of duty,” Maester Aemon tells Sam, but maybe it’s the beginning of actual power as well. (There’s one dead White Walker, after all, who wishes he never met Sam.) Tyrion may be on death row, half the Starks may be dead or in mortal jeopardy, Oberyn may be splattered all over the Red Keep, but if someone as decent as Sam can make it alive through this battle, maybe this isn’t a story in which everyone you care about dies horribly.

Of course, there’s still one more week left in the season.

* I feel as if I’m being a little heartless downplaying Ygritte’s death, but I also think the pace at which the Wall story has played out–we’ve seen the lovers apart as long as we’ve seen them together–robbed the moment of some of its power: there was an element of, Oh right, they were a thing, weren’t they? (I’m not saying I didn’t choke up, but I’m an easy target.)

* Likewise, while there are many characters and storylines that I think the series has brought alive as well or better than the books, there’s an element of the wildlings’ story that I miss here. The books contrast them and their individualistic culture more thoroughly with the hierarchical culture of Westeros; they’re a group of people stuck on the wrong side of history (and a wall) trying to pursue safety and their idea of freedom, making a kind of last stand, which has a poignance to it. This has been lost a little in the TV series, where (with exceptions like Osha and Ygritte) we’ve seen them more as terrifying marauders.

* “She’s more real than you are.” Lovely moment there, Maester Aemon’s blind eyes seeing his old love in the darkness before him.

* I’m no expert on British accents (or any accents really), but I like how the class and character of the crows and wildlings are suggested by their working-class diction here (especially in the cursing: lots of “fookers” and “fooking”).

* “Our vows never specifically forbid intimate relations with women. … What the vows have to say about other–activities–is open to interpretation.” Spoken like someone who’s thought the matter over, an awful lot. 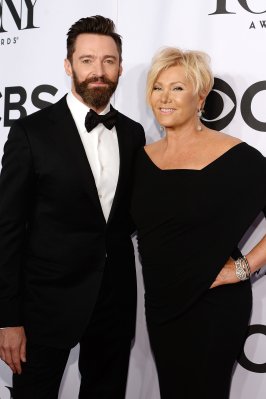 See the Stars of Stage at the 2014 Tony Awards
Next Up: Editor's Pick