Former Secretary of State Hillary Clinton said Sunday she will be “on the way to making a decision” on a 2016 presidential run by the end of the year.

In an interview with ABC’s Diane Sawyer, due to be broadcast Monday, Clinton said she plans to campaign for Democratic candidates running in the 2014 midterms before making a decision on her own candidacy.

“I will be on the way to making a decision by the end of the year, yes,” she said. “Certainly not before then … I just want to kind of get through this year, travel around the country, sign books, help in the midterm elections in the fall, and then take a deep breath and kind of go through my pluses and minuses about what I will – and will not – be thinking about as I make the decision.”

The former First Lady, who has been consistently coy about her exact timetable for announcing a presidential run, said it was “probably likely” an announcement wouldn’t come until 2015. “I’m not positive about that, but I think, you know, the way I make decisions, that’s probably likely,” Clinton said.

An ABC poll releases Sunday shows that 69 percent of Democrats and Democratic-leaning independents support Clinton for the party’s nomination.

“One of our values is we bring everybody home off the battlefield the best we can,” Clinton said. “It doesn’t matter how they ended up in a prisoner of war situation. It doesn’t matter. We bring our people home.” 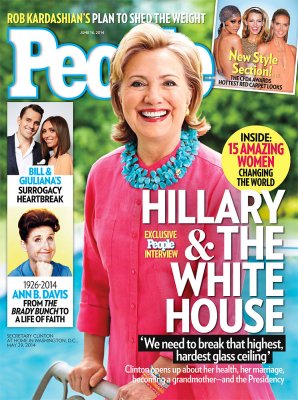 Clinton to People: I've 'Moved On' From Monica Scandal
Next Up: Editor's Pick