The embittered co-owner of California Chrome lambasted owners Sunday who skipped the Kentucky Derby and Preakness Stakes, standing by his remarks one day after accusing his competitors of taking “the coward’s way out.”

Coburn also compared Chrome’s contest with the fresher horses to a man playing basketball with a “kid in a wheelchair.”

California Chrome was the favorite to win the Belmont Stakes after winning both the Kentucky Derby and the Preakness Stakes, raising hopes that the horse would be the first to win the Triple Crown since 1978. But the horse came in a disappointing fourth, with Tonalist taking first place.

Chrome’s co-owner, Steve Coburn, said Sunday it was unfair that other horses were well-rested, NBC reports. None of the top three finishers had raced in both the Kentucky Derby and the Preakness Stakes, the two prerequisites to the Triple Crown.

“I’ll never see, and I’m 61 years old, another Triple Crown winner in my lifetime because of the way they do this,” Coburn said Saturday. “It’s not fair to these horses that have been in the game since Day One. If you don’t make enough points to get into the Kentucky Derby, you [shouldn’t] run in the other two races. … It’s all or nothing because this is not fair to these horses that have been running their guts out for these people and for the people who believe in them.”

“This is a coward’s way out, in my opinion,” Coburn said.

On Sunday, Chrome’s trainer, Art Sherman tempered Coburn’s remarks. The 77-year-old said that Coburn’s remarks were out of context. “The horses aren’t cowards and the people aren’t cowards. … I think it was a little out (of context) myself. But, hey, he was at the heat of the moment. And don’t forget, he’s a fairly new owner. Sometimes the emotions get in front of you. … He hasn’t been in the game long and hasn’t had any bad luck.”

Sherman mentioned that Chrome was gashed in the right, front hoof and had a “good chunk” taken off when No. 3 gate Matterhorn stepped on him at the opening.

Coburn said the sport should be changed so that only horses that run in the Kentucky Derby should be eligible for the two other legs of the Triple Crown. But as TIME’s Sean Gregory noted in a report from the race itself, Tonalist missed out on the Kentucky Derby due to an earlier illness and not because its owners chose to avoid racing. 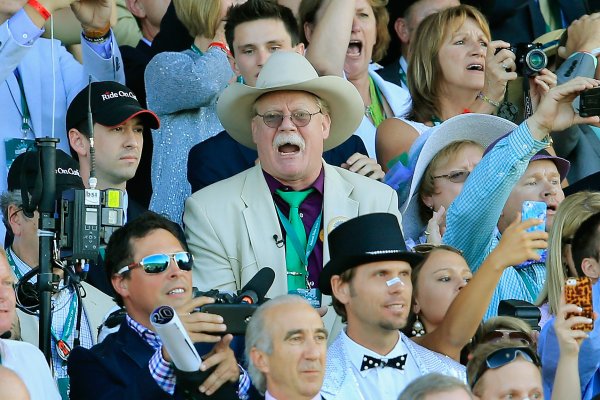 No Triple Crown: Anger and Sadness at the Belmont Stakes
Next Up: Editor's Pick