Russian and Crimean leaders signed a treaty Tuesday to make the autonomous region part of Russia, as Russian President Vladimir Putin stoutly defended the contentious annexation of the peninsula from Ukraine.

“Crimea has always been an integral part of Russia in the hearts and minds of people,” Putin said, in a televised address before the Russian parliament.

Putin set a tone of defiance in his speech Tuesday, calling the political forces in power in Ukraine today “Neo-Nazis” and “Anti-Semites” and calling the Ukrainian capital Kiev “the mother of all Russian cities.” He couched the decision to annex Crimea as a necessary step to correct historical wrongs and protect the human rights of Russians in Crimea. “We’ve seen attempts to ban the Russian language to assimilate the Russian population and of course Russians just like other minorities suffered from constant political crisis that Ukraine’s been going through for 20 years,” he said.

On Sunday, Crimeans voted overwhelmingly in a referendum—which witnesses say included extensive voting irregularities—to break the autonomous republic away from Ukraine and be absorbed into Russia. The president informed his parliament Tuesday that Crimea had requested to join the country, the first step towards formal annexation of the region. He also approved a draft bill on its accession. All that remains to be done before the annexation is finalized is ratification by the Russian constitutional court and parliament.

Putin’s speech comes as Vice President Joe Biden travels to Poland Tuesday to reaffirm American and NATO support for the new government in Ukraine. “It’s an almost unbelievable set of events that have brought us here” Biden said, calling Russia’s annexation of Crimea a “brazen military incursion.” In recent days, Western powers have ratcheted up the pressure on Russia in the standoff over the future status of Crimea and Ukraine. On Tuesday, France’s foreign minister said Russia had been suspended from the Group of Eight, while the U.S. and the E.U. announced new sanctions against Moscow. 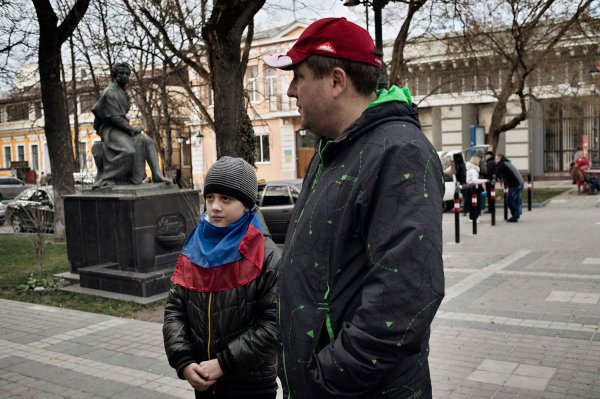 Crimeans Look to Putin
Next Up: Editor's Pick