Box Office: How the Stars Aligned for a Fabulous Fault Weekend

Films about cancer, such as 'The Fault in Our Stars,' can offer a new understanding of humanity.
James Bridges— Twentieth Century Fox
By Richard Corliss

The last word in The Fault in Our Stars is “Okay.” The cancer-teen romantic drama, based on John Green’s beloved best-seller, did far better than okay in its box-office debut. The word might be “awesome:” $8.2 million at Thursday night previews and $17.9 million Friday, for an early total of $26.1 million. Industry swamis are predicting that TFIOS could end the weekend with at least $50 million, perhaps as high as $57 million. The stars are aligned for the first weepie blockbuster of 2014.

Produced for a pinchpenny $12 million, the movie stars Shailene Woodley and Ansel Elgort as afflicted adolescents who meet at a cancer group-therapy session and fall splendidly in love. TFIOS benefitted from a social-media blitzkrieg sparked by Green on his popular YouTube channel Vlogbrothers, and from the quasi-religious rapture of the book’s readers. This week the movie broke the Fandango ticket-sales record previously held by The Vow, the 2012 romance in which Channing Tatum had to win back the love of his amnesiac wife Rachel MacAdams. The Vow opened to $40 million; TFIOS will surely crush that number.

(READ: Corliss’s review of The Fault in Our Stars)

It also took down Tom Cruise, whose sci-fi action film Edge of Tomorrow earned just $10.7 million on Thursday and Friday. Though greeted warmly by critics (89% favorable on the Rotten Tomatoes aggregate-review website, to 82% for TFIOS), the movie was hobbled by a leaden title and a complicated premise: guy fights and dies in battle, goes back to zero, fights and dies again. Edge of Tomorrow will be big abroad, where the 51-year-old star remains a major attraction, but it also bears a hefty $175-million price tag for its budget — nearly 15 times the cost of TFIOS. The Cruise film gleaned a respectful B-plus from a CinemaScore survey of first-nighters, while TFIOS aced a straight A.

The signal embarrassment for Tom Terrific would be finishing his movie’s opening weekend behind two ladies: not just Woodley but Angelina Jolie, whose Maleficent pulled a Thu.-Fri. number of $8.1 million and could win second place with a big turnout of kids at the Saturday shows. The numbers prove again that films aimed at females (The Other Woman), children (The LEGO Movie) or both (Maleficient) can be both popular and profitable. The early audience for TFIOS was overwhelming women under 25. The movie hit its target and, as word-of-mouth spreads, will expand it.

(READ: Why Edge of Tomorrow is the summer’s smartest action film)

If The Fault in Our Stars finishes the weekend with $50 million, it will have registered the year’s eighth biggest opening. That might not sound so very impressive — except that the top seven are Captain America: The Winter Soldier ($95 million), Godzilla ($93.2 million), The Amazing Spider-Man 2 ($91.6 million), X-Men: Days of Future Past ($90.8 million), Maleficent ($69.4 million), The LEGO Movie ($69.1 million) and Woodley’s own Divergent ($54.6 million). Most of these films had production budgets in the hundreds of millions. The least expensive was The LEGO Movie at $60 million. You could make five Faults for one LEGO.

Another important distinction: All the higher-grossing films are fantasies, whereas TFIOS exists in the real world, and concerns itself with people the movie audience might know, or be. Still of high-school age, Woodley’s Hazel and Elgort’s Augustus experience an entire life cycle of emotions in one summer: they love, grow, suffer, face death. Judicious in ladling out sentiment, the film not only makes viewers weep big fat tears, it also earns them. It should remind Hollywood how cathartic it is to have a good noble cry at the movies.

The opening-day success of the picture did not exactly astonish industry insiders; its social-media saturation led them to predict at least a $40-million weekend. What might astonish them is if TFIOS were to match the $57-million opening in 2008 for Sex and the City, another pre-sold, female-pegged hit. The movie based on the HBO series was just for laughs; TFIOS hits the audience in its primal heart, cuing an almost religious fervor among its fans. Don’t be surprised if the movie gets plenty of repeat business from Green fans who read the book, saw the movie and want to feel, at least one more time, the imperiled glory of first and last love. 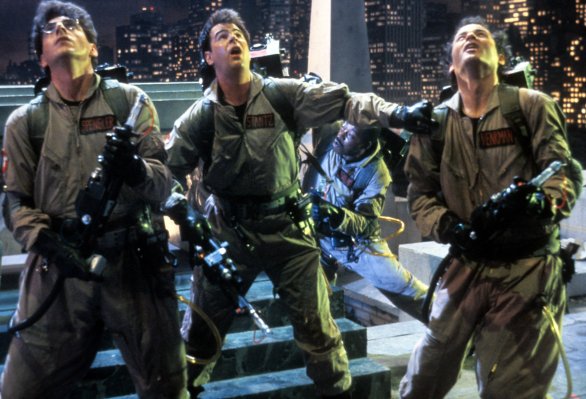 When Ghostbusters Came Out 30 Years Ago, Reviews Were Scarily Mixed
Next Up: Editor's Pick