Missouri thinks it might have an answer to the problems surrounding lethal injections: establish a state-run pharmacy.

In a speech to the Bar Association of Metropolitan St. Louis late last month, Missouri Attorney General Chris Koster called for a “state-operated, DEA-licensed laboratory to produce the execution chemicals in our state,” and urged the legislature to fund the country’s first pharmacy specifically for carrying out lethal injection.

By manufacturing its own drugs, the state could, in theory, get around several difficulties in administering executions. It wouldn’t have to rely on compounding pharmacies, which are often kept anonymous and are unregulated by the federal government. It would be able to have a consistent and adequate supply of drugs, helping the state avoid changes to its drug protocol and the use of drugs in untested combinations. And most importantly, the state might be able to avoid future lawsuits regarding the origins of lethal injection drugs, which have put a halt to many executions around the country—not to mention troublesome executions like that of Clayton Lockett in Oklahoma and Dennis McGuire in Ohio. Meanwhile, the Associated Press, the Guardian and three other news organizations have sued Missouri in an attempt to get the state Department of Corrections to reveal its drug sources. But even considering all that, the cost and sheer logistics of building a pharmacy from the ground up to manufacture a handful of drugs may not be worth it.

“There’s no way I could justify the cost on something like that” if the state is only using it to produce just one or two drugs, says Ernie Gates, president of Gates Healthcare Associates, which consults and advises pharmacies. “The commitment would have to be significant.”

The suggestion by Missouri’s attorney general comes as states around the U.S. struggle to figure out how to keep executing by lethal injection. This year alone, 22 executions have been stayed, largely due to lawsuits involving the drugs being used and the secrecy surrounding them. The Lockett execution went so poorly in April that it elicited a response from President Obama, who called it “deeply troubling” and said he would ask the attorney general to look into the method’s problems.

Like most states with the death penalty, Missouri is struggling to obtain execution drugs. A few years ago, a number of pharmaceutical companies stopped manufacturing drugs for lethal injection, so many prisons turned to compounding pharmacies, which are not federally regulated and loosely monitored at the state level. Many prison systems and state legislatures have worked to protect the anonymity of those pharmacies, which fear consumer backlash if it becomes known that they’re involved in executions. The use of compounded drugs from unknown sources has triggered a series of lawsuits in which inmates are challenging the constitutionality of their executions, arguing that it’s impossible to know whether the drugs are safe and effective if they don’t know where they were made.

No state currently makes its own drugs for executions and instead relies on private drugmakers. Making their own would likely be an involved undertaking, the cost alone easily reaching $1 million, Gates says—not to mention the money needed to regularly staff pharmacists and pharmacy technicians, who often earn six-figure salaries.

Gates says the state would have to abide by United States Pharmacopeia guidelines, which are nationally followed standards for the establishment of pharmacies and ensure a pharmacy’s sterility. The state would need to locate a facility that doesn’t have high amounts of mold or mildew in order to keep the space sterile while also requiring its own air conditioning and heating systems, as well as high-efficiency air filters keep the drugs from becoming tainted.

Many compounding pharmacies are also often built with redundancies—for example, another room will be built in case the main “clean room,” the sterile area where drugs are mixed, becomes unfit for manufacturing.

Gates says there’s no reason a compounding pharmacy couldn’t be built on prison grounds, but it may not be worth the cost if only a few drugs are being produced.

“It’s not just about building a room,” Gates says. “You have to have a real understanding of what you hope to accomplish.”

Since 2011, Missouri has only executed seven inmates, four of whom were executed this year and most given just one drug, pentobarbital.

A state-run pharmacy also may not halt legal challenges surrounding death row inmates. While the state would seek approval from the U.S. Drug Enforcement Administration for its pharmacy, the drugs themselves would not be overseen by the Food and Drug Administration, which doesn’t approve drugs for use in lethal injection.

Many death penalty opponents say that compounded drugs are unsafe because they’re only loosely regulated by states. A compounding pharmacy in Massachusetts has been linked to a meningitis outbreak resulting in dozens of deaths and hundreds of injuries.

“[A state-run pharmacy] would be more transparent than the currency secrecy about sources,” Dieter says, “but this implies that the qualifications of those preparing the drugs be revealed in a way that can be checked, and that the drugs be independently verified by an accredited and identified lab.” 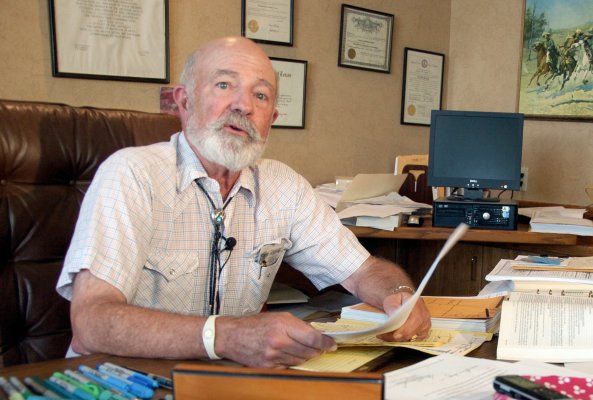 Montana Judge to Be Censured Over Rape Comments
Next Up: Editor's Pick