LeBron James #6 of the Miami Heat reacts after cramping up against the San Antonio Spurs during Game One of the 2014 NBA Finals at the AT&T Center on June 5, 2014 in San Antonio.
Andy Lyons—Getty Images
By Sean Gregory

It’s tempting. Too tempting, really, especially if you’ve joined the LeBron vs. Jordan debate over the last few years. Remember Game 5 of the 1997 NBA Finals, when Michael Jordan, nearly collapsing on the court because of the flu, still scored 38 points to lead Chicago to a crucial Game 5 victory in Utah (the Bulls would clinch the series at home in Game 6)? And Thursday night we had LeBron James, cramping in the San Antonio sweat after the arena’s air conditioning system malfunctioned, being carried off the court in the fourth quarter, before the Spurs closed the game with a 16-3 run to beat Miami 110-95.

MJ would not have done that. Man up, LeBron. It’s tempting.

James, remember, played pretty great in the oppressive heat. He scored 25 points in 33 minutes on 9-17 shooting, while grabbing 6 rebounds and dishing out 3 assists. “Rather than seeing this as a sign of weakness, or that he’s fragile, I think it’s the opposite,” says Dr. James Gladstone, co-chief of sports medicine at the Ichan School of Medicine at Mount Sinai. “He pushed his body as far as he could go.”

And while San Antonio’s A/C malfunction is embarrassing and a potential danger to fans and players, it should not have stopped the game, despite the protestations of the NBA Players Association. “The playing conditions for tonight’s game were completely unacceptable from the opening tip,” Ron Klempner, acting executive director of the union, wrote in a text to Bloomberg. “In a situation like this, there needs to be more open communication before a decision is made that could potentially place players at risk.”

But players weren’t slipping all over the place. If anything, the game was a throwback — to outdoor summer hoops in the park, to the 1980s, when the Boston Celtics and Los Angeles Lakers played in 100 degree swelter at the old Boston Garden. Everyone played under the same conditions. No team had an advantage. The better team won. If you like the Heat, harp on that. Not the heat. 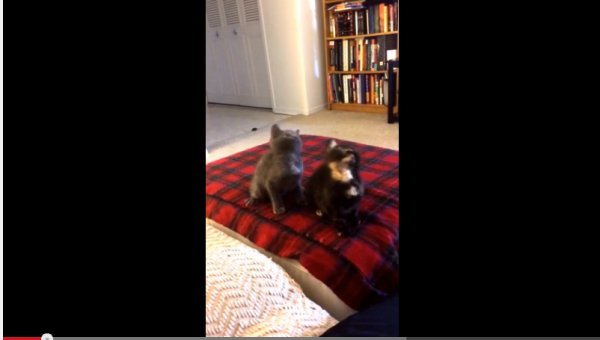 Turn Down for What? Kittens.
Next Up: Editor's Pick