Tetris at 30: An Interview with the Historic Puzzle Game's Creator

Thirty years ago today, a little game about dropping geometrically strange thingamajigs — originally clusters of punctuation marks — into neat, lookalike rows kicked off on a wild journey that led it (and it’s Russian creator, Alexey Pajitnov) out of a metamorphosing Soviet Union to the United States, and from “blockbuster” sales of 2 million already by 1988 to over 425 million paid mobile downloads today.

That game, dubbed Tetris by Pajitnov after the Greek word for the number four, is today one of the most popular video games of all time. It’s played by celebrities, been name-checked by shows like The Simpsons and The Big Bang Theory, appeared (in playable form) on the sides of skyscrapers, found its way into dozens of scientific studies (including one that determined playing the game reduces cravings for food, booze and cigarettes) and appears in New York City’s Museum of Modern Art — a permanent addition to the museum’s exhibit on Applied Design.

I caught up with Pajitnov on the eve of the game’s 30th anniversary, as well as his partner Henk Rogers, the entrepreneur who discovered Tetris in the late 1980s and helped turn Pajitnov’s creation into a worldwide phenomenon.

Can you step us through the process whereby Pentominoes — the puzzle-game that inspired Tetris — led you to try your hand at creating something like it on an Electronika 60 computer, and how that evolved into a system for making four punctuation marks disappear if they filled out a row?

Alexey Pajitnov: I was already quite familiar with Pentominoes, as it was a favorite puzzle game of mine. I also had access to a computer, so it made sense to try to translate that game into something that you could play on a computer screen. To put the Pentominoes on the screen, I had to use symbols because of the limitations of the Electronika 60. My thought process was pretty straightforward: drop the pieces down, and when a row was filled, remove it because there was no reason to keep it on the screen, and you needed more room to go.

What challenges did you face, pre-perestroika, toward marketing and monetizing the game? How did the game spread in those early days?

AP: I had a formal arrangement with the Computer Center of the Soviet Academy of Sciences in the 1980s that granted them rights to exploit Tetris around the world for 10 years. It was easier and wiser for me to allow this arrangement than to try to fight for certain personal rights that were almost non-existent during that time. The Computer Center had different dealings with businessmen around the world who were coming to the Soviet Union to acquire the rights. I wasn’t involved very much with that, but of course there was a certain businessman named Henk Rogers who I met in 1988, and that became history and Tetris soon found worldwide appeal. But all the rights came back to me later on.

Back in those days of the Soviet Union, we didn’t have computer stores that you could visit to buy programs, so everything was copied and distributed via floppy disk. I gave my friends copies of the game on a floppy, and before long, it seemed like everyone knew about it, and was playing it. The real challenge was finding a western publisher, and along came Henk Rogers.

Did you face any personal challenges or difficulties bringing the game out of Russia when you moved to the U.S.?

AP: There were some challenges, but with the help of my friend, Henk Rogers, The Tetris Company (TTC) was formed to serve as the exclusive source of all Tetris licenses. Since then, we have licensed the game to numerous publishers all over the world.

What was it like playing Tetris for the first time at CES in 1988?

Henk Rogers: I saw the game and thought it was nothing special. Something like a game that should be part of a box full of puzzle games. But being interested in puzzles, I stood in line for my turn. When I found myself standing in line for the fourth time when I had hundreds of games to try as a game publisher in Japan, I realized I was hooked on the game in a very basic way. I went after the rights to the game and never stopped until I had all of them.

How did you link up with Nintendo and the Famicom in Japan originally? How did you convince Nintendo to make Tetris the pack-in game for the Game Boy?

HR: I first linked up with Nintendo by porting a Go game from the Commodore 64 to the Famicom. I had convinced [then Nintendo president Hiroshi] Yamauchi-san to let me build that product for Nintendo. After nine months, I was done and after playing one game, Yamauchi said that the game was too weak for Nintendo to publish. He was expecting his 8-bit computer to be a black belt in Go the very first time around. I asked him if I could publish it. He said okay. I did. Tetris was the third game I published on the Famicom.

After Nintendo released Game Boy in Japan I realized that this was the best platform for Tetris. NCL (Nintendo Company Limited) had no policy of including games with the hardware, but NOA (Nintendo of America) did. I convinced the CEO of NOA, Minoru Arakawa, to include Tetris rather than Mario by saying to him, “If you want little boys to buy your machine include Mario, but if you want everyone to buy your machine, include Tetris.” I guess it worked. People say Tetris made Game Boy and Game Boy made Tetris. Both statements are true.

It sounds like things almost got out of control in the beginning, back when Robert Stein and Mirrorsoft and Elorg were involved with the question of who had rights to the game. How did you manage to eventually secure console and handheld — and eventually full worldwide — rights to the game?

HR: I secured the rights to handhelds by going to Moscow (at that time the Soviet Union) and tracking down Elektronorgtechnika (Elorg) in 1989 and negotiating with them an exclusive license for those rights. A month later I was back, this time with Minoru Arakawa and Howard Lincoln [both of Nintendo] to secure the console rights for them.

Alexey Pajitnov had licensed his rights to the Academy of Sciences and through Elorg to the rest of the world for a period of 10 years, which ended in 1995. He asked me to help him secure the rights for him, when the rights reverted to him after the 10 year period had passed, because he knew that Elorg would claim that he never had any rights. I went to bat for Alexey and formed a partnership with Elorg called The Tetris Company. In 2005, I bought Elorg. Now, Alexey and I have total control of the Tetris rights worldwide.

Do you have a favorite version of the game?

AP: My favorite version of the game is Tetris Zone, but I do play Tetris Blitz. I’m also looking forward to Tetris Ultimate, published by Ubisoft. That game will come out this summer for next generation consoles. I’m also still very fond of the Game Boy version from 1989.

Memorable puzzles game mechanics have a kind of timeless immutability, but where might Tetris go next? Does it evolve or stay the same?

AP: The core game mechanics of Tetris will always remain the same, but technology and accessories will evolve, of course, and Tetris will be there like it has been for the past 30 years. There are many variants of Tetris, so you can say that the game has evolved in that way, but if you want to play the standard game – you’ll always be able to find it. 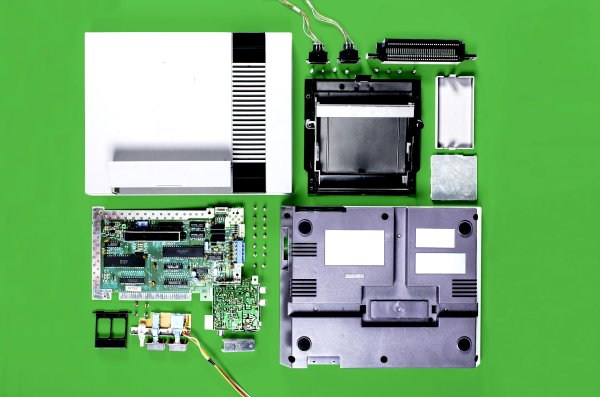 WATCH: What It Costs to Be the World’s Biggest Nerd
Next Up: Editor's Pick