Here's Why Some Indonesians Are Spooked by This Presidential Contender

Retired general Prabowo Subianto rides a horse at a stadium in Jakarta during a campaign rally of the Gerindra party on March 23, 2014
Kyodo / AP
By Per Liljas

Some Indonesians refuse to forget. It’s been 16 years since retired general Suharto relinquished power, but relatives of those who perished or disappeared under his oppressive rule continue to stage protests at Freedom Square in the capital Jakarta every Thursday. Maria Katarina Sumarsih has only missed 12 such gatherings over the past eight years. Her son, a humanitarian volunteer during the 1998 student uprising, was shot dead when he attempted to tend to a wounded protester. Sumarsih is still waiting for justice to be meted out to those responsible.

“Indonesia is the third biggest democracy in the world, but I and all my friends here feel we’ve been abandoned,” she says, adding that she’s afraid the situation could get worse. “If Prabowo becomes President, the population should be prepared to become victims of human-rights violations again.”

Indonesia has come a long way since Suharto. The military has been pushed out of the political scene, the freedoms of press and speech have vastly improved, and July 9 will mark the first time the country replaces one directly elected President with another. For human-rights advocates, however, a huge question mark hangs over the head of one of the leading candidates, Prabowo Subianto.

Toward the end of Suharto’s rule, military units abducted and tortured 23 democracy activists, 13 of whom have not been seen since. Riots followed, leading to over a thousand deaths and scores of rapes. One of the men accused of having orchestrated these abuses is Prabowo — then commander of the special forces.

If Indonesia has come far since Suharto’s rule, so has Prabowo. When Suharto fell in May 1998, Prabowo was head of the army strategic-reserve command, but quickly found himself discredited and discharged from the military, upon which he went into self-imposed exile. Today, he’s refashioned himself as a decisive political leader, the champion of rich and poor alike, and a well-oiled campaign has catapulted him to social-media fame, with a Facebook following that trails only the likes of Barack Obama and Narendra Modi. While Prabowo has admitted to abducting nine activists in 1998, he denies wrongdoing, insisting that these individuals were released and that he was only following orders. He has never been officially questioned, and many Indonesians turn a blind eye to the disputed episode.

“Young people just idolize a leader that looks strong and assertive, they don’t even have the imagination to understand what it was like to live under an authoritarian leader,” says Margiyono, a student activist during the Suharto years. Prabowo’s Great Indonesia Movement Party, or Gerindra, has even managed to attract some former abductees to its camp, but for people like Margiyono, the possibility of Prabowo becoming national leader brings back dark memories.

Agitating for East Timorese independence and Indonesian democracy in the 1990s, Margiyono clashed with paramilitaries believed to be under Prabowo’s command on several occasions, and his flatmate was one of the abductees who never returned. Earlier this year, Margiyono left his job in journalism to start a support organization for Prabowo’s presidential rival Joko Widodo, the Jakarta governor popularly known as Jokowi — not because Margiyono is a Jokowi fan, but because he’s afraid of what would happen if Prabowo wins.

“[Prabowo is] Suharto’s son-in-law, they’re ideologically the same,” he says. “The problem is that under Suharto, formal education taught us what it was like to live under [Suharto’s autocratic predecessor] Sukarno, but [today’s] reform government doesn’t teach us about the democracy situation under Suharto.”

A recent poll by the Indonesian Survey Institute discovered that about 70% of respondents were unaware of the allegations against Prabowo or his discharge from the army. Consequently, he presents to the public those aspects of his military past that suit him. On the campaign trail, he plays the part of the strongman. He has been known to enter a stadium, packed with supporters and uniformed party cadres, in semifascist splendor astride a handsome horse. And he frequently peppers his speeches with anti-Western statements and criticism of multinationals, styling himself as a reborn Sukarno, even dressing like modern Indonesia’s founding father. His supporters sport T-shirts featuring a trendy graphic image of Prabowo wearing Sukarno’s favored peci, or traditional cap.

However, pressure is mounting on Prabowo to clarify his role in the troubles of 1998. A leaked document is currently circulating on the Internet, saying that Prabowo was discharged, among other things, for insubordination after ordering special-forces units to arrest and detain activists. Separately, a group of human-rights advocates has launched a court challenge aimed at bringing Prabowo and others to trial. A former major general, Kivlan Zen, has also come forward, stating that he knew who abducted the missing activists, as well as where they are buried, but he has yet to be officially questioned.

“This new fact gives a political opportunity for us human-rights activists,” says Rafendi Djamin, director of the Human Rights Working Group. “There should be action from the relevant state institutions.”

Worryingly, in 2009 the Indonesian parliament voted in favor of setting up an extraordinary court to deal with the allegations against Prabowo, but President Susilo Bambang Yudhoyono has yet to sign off on the proposal.

“It’s a serious issue that Prabowo has been recognized as a presidential candidate before settling these allegations of crimes against humanity,” says Rafendi. “There is a need to clarify this as soon as possible, not only for the relatives of the victims, but for the whole country, to make sure this kind of crime doesn’t happen again.”

Dodi Ambardi, executive director of the Indonesian Survey Institute, believes chances of such clarification are slim. His institute conducted a survey of people who know about the allegations against Prabowo, and found that the majority were willing to forgive him.

“To a large extent, the human-rights allegations are a middle-class issue,” says Dodi. “Prabowo attracts many voters locally because he’s seen as the candidate of the Islamic community and because he presents himself as a national hero.”

The Gerindra party’s savvy campaigning has managed to secure a diverse voter base. Coalition building with Islamic parties has won it the religious nod. The co-opting of nationalist symbols, like the mythical garuda bird, ticks nationalist boxes, as does Prabowo’s military and his claims to an aristocratic lineage. A video made by party supporters to Pharrell Williams’ viral hit “Happy” gave his image a modern gloss, as did his appearance on the recent final of Indonesian Idol to hand out prizes.

Fadli Zon, the deputy chairman of Gerindra, says the allegations of rights abuses are outdated.

“These human-rights cases aimed at defaming Prabowo are continuously recycled,” he tells TIME. “But people are smart, so it will have no influence on our campaign.”

Campaign managers are even happy to play off the accusations. Gerindra has published a book called Kidnapped by Prabowo, describing it as “a story based on real events,” and featuring a striking cover of a frightened man being grabbed from behind. When readers open the book, however, they learn that this is not an account of activist abductions but a parable of how an ordinary man is brought into Prabowo’s life, and gets to see the great man from behind the scenes.

Noudhy Valdryno, the head of Gerindra’s social-media team, says he relishes the opportunity to explain to Indonesia’s digital-savvy youth that in 1998 Prabowo was a military leader defending the security interests of his country. “If they start arguing with us, we get the chance to explain more, so it’s a win-win situation for us,” he says.

As a result of this clever and aggressive campaigning, Jokowi’s once gaping lead has been reduced to 10% with only a month left to go, and Prabowo’s repeated assertions of his innocence could further narrow that gap. On Monday night, as the two presidential candidates squared off in their first televised debate, the notoriously temperamental Prabowo got emotional when answering a question on his human-rights position from Jusuf Kalla, Jokowi’s running mate.

“I understand where you’re going with this: whether I would be able to protect human rights because I am a human-rights violator,” said Prabowo. “Is that what you’re getting at, sir? Mr. Jusuf Kalla, I take responsibility, and my conscience is clear: I am the strongest defender of human rights in this republic.”

Many Indonesians believe him. 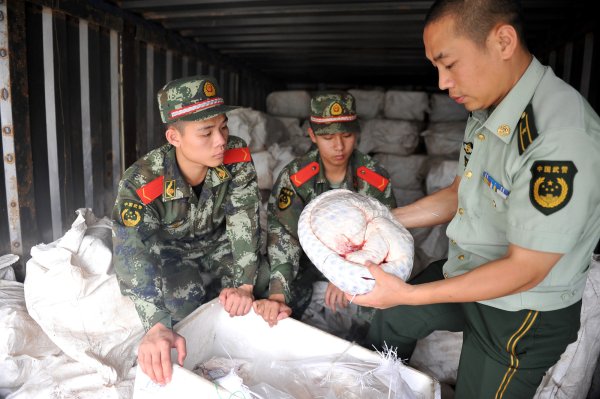 China's Appetite for Pangolin Is Threatening Its Existence
Next Up: Editor's Pick