Never mind that most men in India these days seem perfectly comfortable in old jeans and Nike T-shirts, or that the leader of the world’s largest democracy may have bigger fish to fry than trendsetting. Narendra Modi, the country’s controversial new Prime Minister, is apparently the next big thing in Indian fashion.

One case in point: the trademarking of the “Modi Kurta” — his signature outfit that, much like his politics, offers a certain contemporary practicality to the fabric of Indian tradition. It will soon be branded and sold en masse in India, the U.K., the U.S. and Southeast Asia, according to a recent piece in the New York Times describing the “fashion fallout” of Modi’s rise to power.

The Prime Minister’s kurta is a shorter, crisper version of the traditional tunic; pair it with Bulgari shades and a Movado watch (he’s got penchants for them both) and you have a getup that nods to old national values while boasting the sophisticated commodities of Western life, which have been eagerly embraced by the upwardly mobile country in the 20-some years since its economy opened up to the world.

The ensemble is about as mixed as his record as a political leader, really. While his leadership of the state of Gujarat ushered in some of the most impressive economic growth the country has ever seen, questions remain over his role in a string of riots in the state in 2002 that left more than 1,000 people dead. (He has been officially cleared of any wrongdoing.)

The Modi Kurta isn’t being sold with a political manifesto, although the website Modimania, which markets the attire, says it hopes to sell the outfit to “Modi lovers and his followers” — which, going by poll results, is about 31% of the country’s more than 800 million eligible voters, or a pretty sizable market.

Depending on the color you choose (it comes in saffron, white, pink, yellow, black and four shades of blue), the kurta is going for either 899 or 1,200 rupees, or less than $20 under current exchange rates. 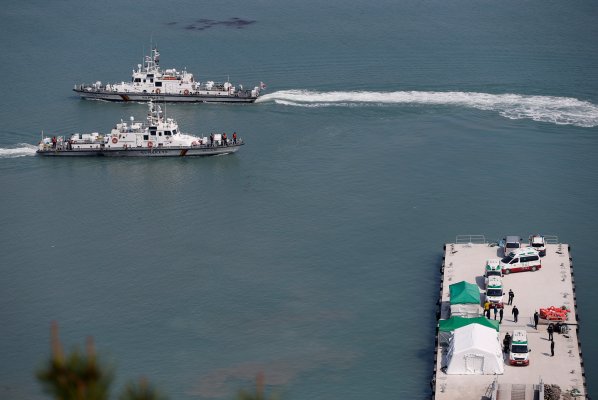 Death Toll in Sewol Tragedy Climbs to 290
Next Up: Editor's Pick