A family member of a passenger onboard the missing Malaysia Airlines flight MH370 fingers prayer beads as he listens to a briefing from the airline company with other family members (in background) at a hotel in Beijing, March 18, 2014.
Kim Kyung-Hoon—Reuters
By Charlie Campbell

Three million Internet users have joined search teams from 26 nations hunting for the missing Malaysia Airlines airliner, in what could be the largest crowdsourcing project ever.

More images are being added every day, reports AFP. Around 2.9 million areas of interest have been tagged by participants based on some 257 million satellite image views.

At the same time, investigations continue into the crew of the Boeing 777-200. Malaysian police have searched the homes of the captain, Zaharie Ahmad Shah, 53, and first officer, Fariq Abdul Hamid, 27. A flight simulator was takend from the captain’s home.

On Monday, authorities said that pilot suicide remained a possibility. “We are looking at it,” acting transport minister Hishammuddin Hussein told reporters Monday.

However, one Asia-based commercial pilot, who asked to remain anonymous as he was not authorized to speak to the press, told TIME that scenario seemsed unlikely.

“If he wanted to kill himself, why go to all this trouble to go on this elaborate flight path?” he asked. “Why not just plough the plane into the sea?”

However, it would be easy for one pilot to lock the other out of the cockpit. “There’s a code on the door and you dial the number which gives an alert to whoever’s on the flight deck,” he says. “Then he or she can press a button to let that person in, or deny the request and keep the person out.”

Search operations for flight MH370, which left Kuala Lumpur at 12:41 a.m. local time bound for Beijing, are focused on two vast corridors; one stretching from the border of Kazakhstan and Turkmenistan to northern Thailand, and another from Indonesia to the southern Indian Ocean.

Chinese Ambassador to Malaysia Huang Huikang told state news wire Xinhua Tuesday that no evidence had been uncovered that Chinese nationals were involved in any hijacking or terrorist attack. Of the 227 passengers aboard the flight, 153 were Chinese nationals.

No other nation has reported anything suspicious based on the passenger manifest.

Internet users in China, increasingly frustrated with what they see as disinformation from the Malaysian authorities, have called for sanctions and tourism boycotts. “China should sanction Malaysia to force the truth out of them, “ lawyer Zhang Kai wrote on the Weibo microblogging service.

Chinese state media revealed that western areas of China, which could conceivably have been on the jet’s flight path, were being closely examined. On Monday, Kazakhstan said it had not detected any “unsanctioned use” of its air space on the day MH370 disappeared. In India, a military intelligence source told the Times of India “There is no way our military radars would have missed the airliner as it flew over [the] Andaman Sea, as there is high traffic around that time.” New Delhi has also played down suggestions that the plane could have been intended as a weapon against an Indian target.

Meanwhile, an earlier hypothesis that the last radio transmission from the plane came after attempts to muffle communications may have been hasty. The last transmission from the ACARS system was received at 1.07 a.m., as the plane left Malaysia’s northeast coast towards and passed over the Gulf of Thailand towards Vietnam. The device was supposed to check in 30 minutes later, at 1.49 a.m., but that message never arrived.

At 1.19 a.m. someone in the cockpit, now believed to be the copilot, said the words “All right, good night” to Malaysian air traffic control. Two minutes later the plane’s secondary radar transponder was turned off.

So it is possible that attempts to mask the aircraft’s progress by shutting off ACARS were initiated either before or after the final words were uttered from the cockpit.

Meanwhile, a commander with the Pakistani Taliban denied the group was responsible for hijacking the jet, but wished it had. “We wish we had an opportunity to hijack such a plane,” he told Reuters by telephone from group’s stronghold in North Waziristan. 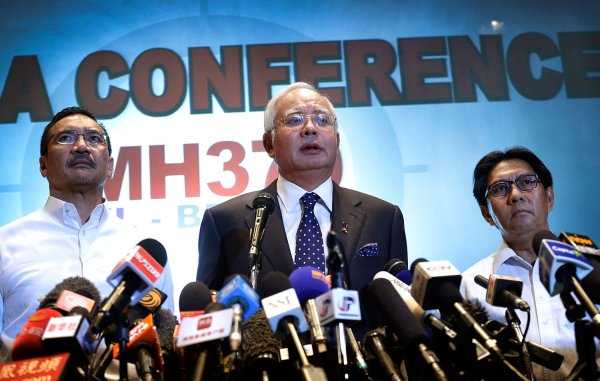