How The Moon Was Born

Astronomers were pretty sure they’d long since solved the mystery of how the Moon was born. It was an open question until Apollo astronauts started hauling lunar rocks back to Earth in the late 1960’s, and scientists discovered they were chemically similar to the rocks back home. By the mid-1970s, they had the riddle figured out: billions of years ago, something the size of Mars smacked into the Earth, creating a Moon’s worth of molten debris that quickly cooled, moved into a stable orbit and became our familiar cosmic companion.

Over the ensuing decades, however, it became clear that Houston had a problem. The lunar samples were too similar to those on Earth. The two kinds of rock should have shown at least minor differences, reflecting the unique chemical makeup of the long-gone Mars-size cannonball which was dubbed Theia. But no matter how hard geochemists looked, they couldn’t find any. Theorists came up with a number of ways around the dilemma, most of them involving much more complicated collision scenarios, but as planetary scientist Robin Canup, of the Southwest Research Institute in Boulder told TIME last year, “Every time you add an extra complication, you reduce the overall probability of an event happening.”

You could keep your collision theory, in short, but only by assuming that the whole episode an utter fluke, so improbable that it shouldn’t have happened at all—exactly the kind of wild scenario that makes scientists wince. But a study just published in Science may have set things right. The chemical composition of Moon and Earth rocks, says lead author Daniel Hewartz, of the University of Gottingen, in Germany, turns out not to be so similar after all—close, but not identical. “The difference we found is very small,” he says. “It’s so small that previous studies couldn’t detect it.”

Hewartz’s analysis did detect it by concentrating on an abundance of oxygen-17, a rare version of the element that has nine neutrons in its atoms rather than the usual eight. “Our study shows that the moon has just a bit more O-17 than Earth,” Hewartz explains. “Just a bit” meaning a minuscule .012 percent more, but that’s enough. “This means that Theia had slightly more as well.”

Hewartz and his colleagues were able to spot such vanishingly small amounts of oxygen-17 thanks to a new technique they devised: seal the lunar rocks in a chamber filled with fluorine gas, then zap the sample with a laser to vaporize a tiny bit of it. The scientists then drain out gas plus vapor and send it through a chromatograph, which separates free oxygen liberated from the rock from the other gases. (It would be simpler just to zap the rock in a vacuum, but if you do that, says Hewartz, “it just melts.”)

Not only did the team see elevated O-17 in samples NASA provided them; they also saw it in samples other groups had already looked at without finding anything. That, says Canup, “tends to support their claim.” The only caveat, she warns, is that the difference they detect between Earth and the Moon is so small that there’s likely to be a debate over whether they’re seeing something real, or whether it’s simply an artifact of the way they interpret their raw data.

But arguments like that, she says, can be a good thing. “It’s going to prompt a lot more work on this topic, which will be great for the field.” And if Hewartz and company turn out to be right, it will reconfirm a theory scientists thought they’d proven during the Ford administration—a theory they were reluctant to see go simply because of its appealing simplicity. “It’s something,” as Harvard planetary scientist Sarah Stewart told TIME last December, “you could explain in a sentence to your grandmother.” 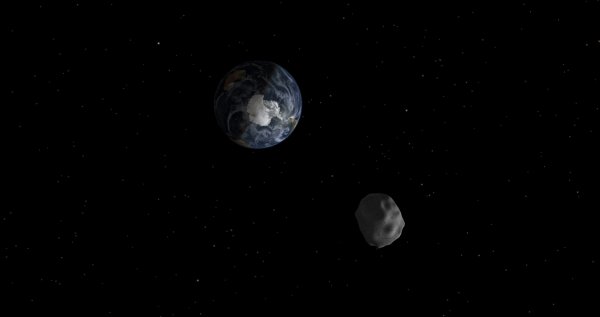 Watch 'The Beast' Asteroid Fly Past Earth Live
Next Up: Editor's Pick