The Comedy Central host ripped the online commerce corporation apart on his show Wednesday night for its ongoing battle with Hachette, the publisher of Colbert’s books and of a slew of other notable authors like J.K. Rowling, David Sedaris, and Malcolm Gladwell.

So why did Colbert flip the retailer the bird not once but twice on air? In an attempt to renegotiate ebook pricing, Amazon has actively been trying to dissuade customers from buying Hachette books. This includes completely removing preorder buttons and putting books on backorder for weeks on end.

National Book Award winner and Hachette author Sherman Alexie came on the show to urge people to stop buying on Amazon. “I’m just happy to be here,” Alexie said. “If Amazon had been in charge of the travel, it would have taken me two to five weeks to get here.”

At the end of his show, Colbert encouraged viewers to purchase California by first time Hachette author Edan Lepucki at a local Portland store Powell’s—immediately making it a bestseller.

Hi Colbert fans! Our site is going a little slow bc there are SO MANY of you but don't worry, we'll get all your orders! Thank you!

I have just been informed that the book "California" can be purchased at http://t.co/dXkJ38wUPD by citizens in ANY state! #CutDownTheAmazon

Hachette said Wednesday that it plans to resolve its dispute with Amazon — but the online retailer may wish to settle terms before Colbert takes over from David Letterman on CBS, where his audience (and influence) will be even greater. 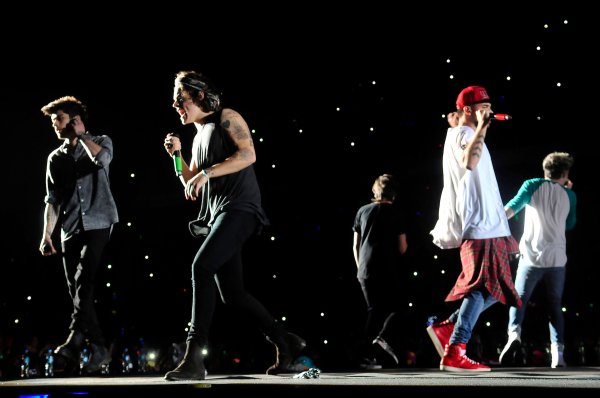 One Direction Fanfiction Writer Gets Book Deal, But Not Much Respect
Next Up: Editor's Pick