Behind the Scenes of Bowe Bergdahl's Release

In the days and hours leading up to the release of Sergeant Bowe Bergdahl last week, his Taliban captors in Pakistan prepared for a big send-off. Those selected to physically hand Bergdahl over to U.S. officials at a pre-arranged location on the other side of the border in Afghanistan rehearsed the messages they wanted to convey to the American people. A videographer was assigned to cover the event, for propaganda purposes. And those closest to Bergdahl commissioned a local tailor to make him a set of the local tunic and trousers in white, which, given as a gift, denotes a gesture of respect.

“You know we are also human beings and have hearts in our bodies,” a senior Taliban commander affiliated with the Haqqani network, which was holding Bergdahl captive, tells TIME. “We are fighting a war against each other, in which [the Americans] kill us and we kill them. But we did whatever we could to make [Bergdahl] happy.”

The commander, who has been known to TIME for several years and has consistently supplied reliable information about Bergdahl’s captivity, is not authorized by his superiors to speak to the media, so he has asked not to be identified by name. The commander spoke to TIME by telephone from an undisclosed location in Afghanistan.

Bergdahl, who was the only known remaining U.S. prisoner of war from the long conflict in Afghanistan, had learned basic Pashto during his incarceration and had made several friends among his Taliban captors, according to the commander. The tunic set, along with the woven scarf that can also be worn as a turban, but is draped across Bergdahl’s shoulders in the Taliban video documenting his release, was a parting gift designed to demonstrate no personal ill will, says the commander: “We wanted him to return home with good memories.”

Bergdahl’s release, as part of the first prisoner exchange between the U.S. and the Taliban in 13 years of war, was the culmination of a two-and-a-half-year process marred by Taliban intransigence and Afghan government meddling that eventually saw the near simultaneous transfer of five top-level Taliban officials from detention in Guantánamo Bay to a form of house arrest in Qatar. The outcome has sparked fierce criticism from Republicans in Congress.

So dispirited was Bergdahl with the process, says the commander, that he didn’t even believe his captors when they announced his pending release. Bergdahl had been there once before, in March 2012, when negotiations were so close that he had already been handed over to senior members of the Taliban council in Afghanistan conducting the talks. When they collapsed, Bergdahl was shuttled back to Haqqani captivity in Pakistan’s ungoverned tribal areas along the border. “That’s why he didn’t trust us this time when he was told about his likely release,” says the commander.

It is not entirely clear what made the negotiations more successful this time around, other than the sense of urgency triggered by Bergdahl’s apparent declining health and U.S. plans to significantly reduce military troop numbers in Afghanistan over the next couple of years. For the Taliban, it doesn’t matter. They see the exchange as an unmitigated victory. “Our talks finally proved successful for the prisoners’ swap,” says the commander. “We returned our valued guest to his people and in return, they freed our five heroes held in Guantánamo Bay since 2002.”

Another senior Taliban commander, who is close to the senior Taliban leadership based in Kandahar, Afghanistan and Quetta, Pakistan, and is close to the negotiations, describes scenes of intense jubilation among the Taliban leadership and their supporters. Candies and sweet pastries are being passed around, he says, speaking to TIME via telephone from the Kandahar area. Those close to the leadership and the detainees are feasting on “whole goats cooked in rice” — a special meal usually reserved for celebrations. “I cannot explain how our people are happy and excited over this unbelievable achievement.” (He too has been known to TIME for several years.) “This is a historic moment for us. Today our enemy for the first time officially recognized our status.”

The news of the detainees’ release, says the commander from Kandahar, spread like a wildfire. “Besides our field commanders and fighters, our leader Mullah Mohammad Omar is so happy and is anxiously waiting to see his heroes,” he says.

There was some disgruntlement among Taliban ranks over the terms, admits the Kandahar commander. Some members wanted a ransom payment for Bergdahl, in addition to the release of the Guantánamo detainees. But the leadership prevailed. “We told them that these five men are more important than millions of dollars to us,” he says. He was more tolerant of complaints from Taliban foot soldiers who pointed out that for all the celebrations surrounding the officials’ release, there was no reward or recognition for the Taliban fighters who captured Bergdahl in 2009. But that’s not likely to get in the way of future attempts to kidnap American soldiers, across all ranks.

Asked whether the Taliban would be inspired by the exchange to kidnap others, he laughs. “Definitely,” he says. “It’s better to kidnap one person like Bergdahl than kidnapping hundreds of useless people. It has encouraged our people. Now everybody will work hard to capture such an important bird.”

— With reporting by Mushtaq Yusufzai / Peshawar 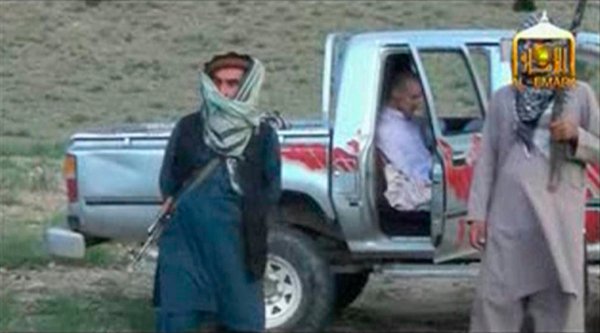 Taliban Commander: More Kidnappings to Come After Bergdahl Deal
Next Up: Editor's Pick