Participants hold candles as they join tens of thousands of people attending a candlelight vigil at Victoria Park in Hong Kong on June 4, 2014
Kin Cheung—AP
By Melissa Hellmann / Hong Kong

According to organizers, on Wednesday night over 180,000 people in Hong Kong attended the city’s 25th anniversary commemoration of the Tiananmen Square massacre. While police put the estimate at 99,000, the large number of people unable to enter the main area of the city’s sprawling Victoria Park forced organizers to accommodate the overspill in a large greensward on the park’s northern side, suggesting that the attendance was unusually high.

Hong Kong is the only place on Chinese soil where such a gathering is permitted, and the turnout is an impassioned riposte to Beijing’s increasingly desperate attempts to erase from the history books any memory of the Tiananmen movement, named for the vast plaza at the heart of the Chinese capital where it was born in 1989.

The atmosphere on Wednesday was fraught with emotion as Hong Kongers, who feel Beijing’s increasing encroachment on the city’s way of life, pondered the brutality of a Communist Party that showed no compunction in gunning down unarmed students and workers all those years ago, and which continues to demonstrate unblinking readiness to use the tools of repression. To many here, the original rallying cry of Tiananmen — for a multiparty, democratic China — remains as resonant as ever. Throughout the evening, speakers urged the attendees to remember the students’ fight for freedom.

A statement issued by the organizers, the Hong Kong Alliance in Support of Patriotic Democratic Movements of China, called for the vindication of the students, the holding to account of officials responsible for the massacre and for the ending of one-party rule in China. “Let all the Chinese people everywhere see this,” the statement said. “Let them see that on this corner of the land that is China, faith is being kept.”

The soccer pitches and lawns were crammed not only with black-clad university students but also office workers and families with young children, holding candles aloft and singing songs of protest. The climax of the ceremony took place when huge plumes of incense ascended skyward, the names of the dead were intoned and funeral wreaths laid at a replica of the Monument to the People’s Heroes — the tall obelisk at the center of Tiananmen Square where, in 1989, the students made their last stand. Attendees bowed deeply three times in the custom of Chinese funerals, and in the ensuing moment’s silence the only sounds that could be heard were the chirping of cicadas and the faint, plaintive notes of a pipa. Hong Kong’s freneticism had come to a halt.

Many of the attendees had not been born when the massacre at Tiananmen took place, but they joined the candlelight vigil, in the words of 21-year-old student Jacky Hui, to “send a clear message to the government and to show the world that we haven’t forgotten the event.” A member of local student activist group Scholarism, Hui added that he recognized similarities between the Beijing students’ fight for democracy and his desire for Hong Kong to be able to be able to directly elect its own leader. (At present, an electoral college of 1,200 voters, vetted by Beijing, chooses the city’s Chief Executive.) “The students on June 4 asked the government for political reform. Similarly, nowadays students are asking for political reform and civic nomination [of Chief Executive candidates],” Hui said.

The vigil comes at a time when tensions between mainland China and Hong Kong continue to heighten. In May, a University of Hong Kong poll on local views of the Tiananmen massacre found that sympathy for the official account — which portrays the movement as a seditious rebellion that had to be suppressed for the stability of the nation — had sharply fallen. In recent years, too, Hong Kongers have been at odds with Beijing over a host of issues, from national education and media freedom to the speed of political development. The growing influx of mainland traders, migrants and tourists in Hong Kong has meanwhile thrown into high relief the cultural differences between the inhabitants of China’s freest city and their compatriots.

Michael DeGolyer, a professor of political economy at Hong Kong Baptist University, says this year’s vigil could mark the “beginning of a shift of views towards mainlanders.” Battle lines look set to be hardened in late June, when Hong Kong’s Occupy Central movement plans to stage mass protests in the city’s main business district if demands for electoral reform are not met. DeGolyer points out that the “occupation of public space … is very similar to what happened in Tiananmen.”

David Zweig, the associate dean of humanities and social science at Hong Kong University, says a schism between people in Hong Kong and the mainland has been exacerbated by local disappointment with Chief Executive Leung Chun-ying — who is often seen as Beijing’s representative, not Hong Kong’s — along with threats on press freedom. Zweig adds that people are also concerned about Beijing’s potential involvement in the election of the Leung’s successor in 2017. “It’s a key time because what Beijing decides to do about the decision on the Chief Executive will have very big significance for the future of Hong Kong and give a clear signal about the future of where China is going,” he says.

For one group of people, the solution is plain. On the fringes of yesterday’s vigil, a dozen or so members of the so-called Voice of Loving Hong Kong — a pro-Beijing group — staged a counterdemonstration that, at one stage, led to scuffles and one arrest. The group displayed a banner that suggested forgetting was the best option. “June 4 was for the public good,” the banner read. “Put down the burden, dismiss negativity from your bosom and move toward the future.”

For most Hong Kongers, however, China will never be able to properly face that future until it acknowledges, and deals with, the single most painful event of its recent past. 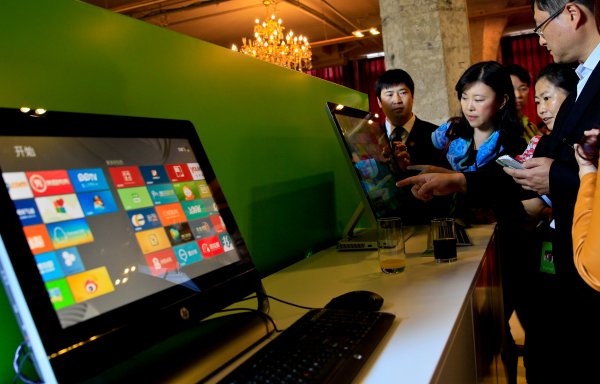 China Escalates Its War on American Tech Firms
Next Up: Editor's Pick