Brian Schweitzer Isn't Holding Much Back as 2016 Approaches

To get rid of the trash, former Montana Governor Brian Schweitzer either has to drive it away in a pickup from his remote lake house or burn it in a rusty oil barrel. But with the cellular signal from a nearby tower, he is able to broadcast live high-definition video of himself from his wine cellar to MSNBC viewers all over the country.

That same technology has also allowed him emerge in the last several months as a notable force in Democratic politics, as he has begun to explore publicly the possibility of a 2016 presidential bid and offer criticisms of President Obama and his heir apparent, Hillary Clinton. In this week’s TIME magazine, I have a story about Schweitzer on the range, his views of the party, and his thoughts on how to win in 2016. (The story is free to read online for subscribers. Everyone else click here to subscribe.) Suffice it to say, he is not just another Democratic candidate.

The story was reported over two days in May in and around his home, taking walks, riding horses, traveling the countryside in a six-wheel Polaris ATV and crossing the local roads in his pickup truck. He talked pretty much the whole time. Not all of the newsworthy things he said made it into print.

Here is a selection of his views on everything from Obama to Clinton to Republican resistance to comprehensive immigration reform. More, of course, can be found in the magazine.

On the Barack Obama presidency

Some of it is because they didn’t move fast enough, and some of it was dashed because you get to Washington, D.C., and it turns out that the Republicans are mostly owned by corporate America and the Democrats are partially owned by corporate America. The same insurance companies and pharmaceutical companies, the same military industrial complex that fills the coffers for Republican reelections, they filled the coffers of Democrats for reelection. So that things don’t get done shouldn’t surprise you because it’s safe not to get things done. The status quo works.

You can’t be the candidate that shakes down more money on Wall Street than anybody since, I don’t know, Woodrow Wilson, and be the populist. You can’t be the one to say we’re going to focus on rebuilding America if you voted to go to the Iraq war. There were 30 some Democrats who voted against that.

On whether he would be a better president than Hillary Clinton

Well, I think so, of course. I think I have a background and a resume that isn’t just in government. But the time I was in government, I was a chief executive. And as I said to you before, you can go around Montana and ask people what they think of me and they will say, “Well I didn’t always agree with him, but I always knew where he stood and he was good with money.” That’s what they will say to a person. And I think there is one thing we all can agree on: they are not good with money in Washington, D.C.

I watched [Former West Virginia Sen.] Robert Byrd stand up and beg this country not to go to war in Iraq. And I would have been standing right beside him. A young guy, not an old guy, and I would have been saying, “I lived there [in the Middle East]. Are you f—ing crazy. Iraq is fighting the war against Iran. We are creating a vacuum, and we will have to fill it, or the Iranians will.”

On the hazards of working in Washington, D.C.

I do know this. If someone has been entrenched in Washington, D.C., for 8, 10, 12, 20 years, they are bought and paid for by the special interests. Not because they wanted to, not because they consider themselves corrupt, but because first there is a deal, and then another deal, and then they look the other way on big banks, and then you look the other way on regulation, and then you allow outsourcing of taxes, and then you allow the military industrial complex to talk you into voting for another war, and pretty soon you look at yourself in the mirror and you go, “My God, I’m all of those things that I hated when I came here.”

Are we going to choose more leadership that is going to roll over and get scratched on the belly by corporations like a fat dog? Are we going to be able to reform this healthcare system so it is one that doesn’t hand your taxpayer dollars to private insurance companies? Are we going to force the pharmaceutical companies to sell medicine in the United States for the same price as they do to the rest of the world?

Let me tell you who is rethinking their position on immigration. Not the Republican party. The Cheyenne, the Gravant, the Salish, the Crow. You know, they’d like to have that decision back. All the rest of us, what kind of royalty was your family when they got here? I know my family wasn’t royalty. They came here with just the clothes on their back and faith in God and high hopes and for the most part no place to go.

On the Democratic big tent

We are a big and diverse country and for the Democratic Party to be successful we have to be a big and diverse party. It has to be that same party that not only respects gay and lesbian rights and transgender rights in San Francisco, but respects that blue collar guy who takes a shower at the end of the day and not in the morning.

On the difference between big state and small state governors

Almost without fail, politicians that come from New York and Texas and California and Florida and Illinois, their personal game, their ability to connect one-on-one, their ability to walk into a room and light it up, is nothing like the folks that come from the Dakotas and Nebraska and Arkansas. Because in a place like Montana you don’t win an election by those TV ads. They know you — “Yeah I met him, I know his sister, I knew his parents.” And almost without fail if you walk in and take a look at the governors, you can pick out the ones from the big states.

On his strategy if he decides to get in the race

Look, if you wanted to make a big machine that matches the machine that is likely to be built around Hillary then you would have to have started eight years ago. But if the outcome is always known with a superior slow moving army then we would still be part of England and we would still have a king. And Hillary would be president, or whatever you have under a king, but certainly it would not have been Obama. 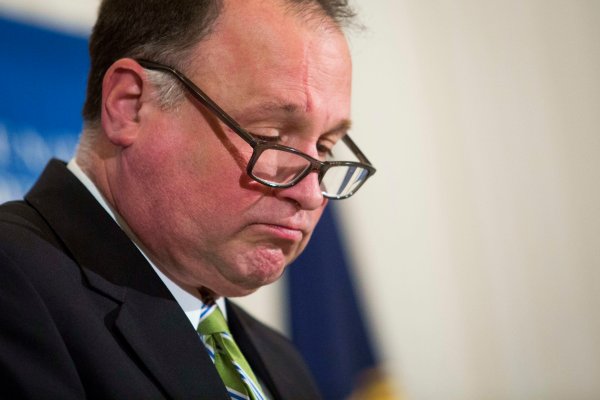 Va. State Senator Tells Parents of Troubled Kids: You're Not Alone
Next Up: Editor's Pick