REVIEW: The Fault in Our Stars Earns Its Big Fat Tears

L-r: Ansel Elgort, Shailene Woodley, on the set of A Fault in Our Stars, 2014.
James Bridges—20th Century Fox
By Richard Corliss

Hazel Grace Lancaster (Shailene Woodley) and Augustus Waters (Ansel Elgort) don’t have absolutely everything in common. For example, her favorite book is the death-drenched An Imperial Affliction, by the mysterious Peter van Houten. His favorite: the novelization of a video game he loves, Insurgent 2. She’s deep and depressed, he’s all blithe bonhomie.

But both are cancer teens. Augustus, the former basketball prodigy, lost a leg to osteosarcoma; Hazel, with what started as thyroid cancer and has since spread geometrically, lugs around an apparatus the size of a fire extinguisher to pump air into her dilapidated lungs. And if their choice in literature differs, they are together as the heroes of John Green’s The Fault in Our Stars, the YA best-seller that is now a pretty fine movie.

(READ: Lev Grossman on John Green’s The Fault in Our Stars)

An adolescent take on the old film weepie Love Story (“What can you say about a twenty-five year old girl who died?”), Green’s book managed to be both bitingly sarcastic and unashamedly uplifting. Having lived with cancer for half of her 16 years, Hazel has developed an emotional auto-immune system: mockery. She greets anyone in authority — her parents, her doctors, the guy who runs the group-therapy session at a local church — with an eyebrow raised in cynical judgment. She has fully earned the attitude held by many teens: that they’re on a desperate adventure adults simply can’t understand. That adage is true for Hazel, who is likely to die before she can legally buy a beer.

Her doctor has advised doubling her meds, but the true antidote is a strong dose of luh-uv. And Augustus is the sweetest Dr. Feelgood. His seeming ease with his prosthesis, and with what doctors tell him is an 85% chance of beating the disease, complements her dour belief: “Depression is not a side effect of cancer. Depression is a side effect of dying.” His Candide and her Cassandra are the perfect match. And what is drama — all drama, really — but the story of beautiful people with horrible problems?

(SEE: A clip from The Fault in Our Stars)

Hazel’s and Augustus’s mutually ticking Doomsday clocks compel them to pack the luster of a lifetime — a first love, a trip to Europe, a meeting with Hazel’s favorite author, a last love — into what may be their only summer. Skeptical Hazel comes alive at the innocent touch of Augustus, whose charm is as urgent as it is benign. He’s like a pop record that has just three minutes to raise your spirits or break your heart. For Hazel, Augustus does both.

They may weave the same magic on moviegoers, so smartly does the film enfold this loving couple in the cocoon of evanescent intimacy. In the screenplay by Scott Neustadter and Michael H. Weber — whose scripts for (50o) Days of Summer and The Spectacular Now also apotheosized the angst and ecstasy of young love — Hazel and Augustus are all either of them needs. The movie gives them exactly one friend, Isaac (Nat Wolff), for misanthropic commit relief, and cannily excludes Hazel’s parents (Laura Dern and Sam Trammell) from the best parts of her luscious, endangered world. Though they have become expert at fretful optimism and pre-grieving, the parents can be chaperones but not confidants. And they must be denied access to their daughter’s tree house of love.

Movies about adolescence as a secret garden, where only misfits fit, bloomed in the 1960s, beginning with David and Lisa: Keir Dullea as the boy who won’t let people touch him, and Janet Margolin as the girl with dissociative identity disorder. Otto Preminger’s Tell Me That You Love Me, Junie Moon turned the duo into a trio: a literally and emotionally scarred young woman Liza Minnelli), an epileptic (Robert Moore) and a gay paraplegic (Ken Howard). Love Story, in 1970, streamlined these mental and physical disabilities into the plot wallop of leukemia, which befalls poor girl Ali MacGraw as her rich young husband Ryan O’Neal sobs and endures. All these decades later, The Fault in Our Stars sets the most toxic misery among the most adorable company.

Fault has a few. A meeting in New Amsterdam with Hazel’s favorite author (Willem Dafoe) seems a bilious detour with an improbable payoff. The trip also affords the filmmakers an egregious scene in the Anne Frank House, where a Jewish girl’s descent into the Holocaust is straight-facedly compared to a teen’s cancer. No, we have to say; they’re different. To paraphrase Hazel’s maxim on infinities: some atrocities are bigger than other atrocities.

(READ: Roger Rosenblatt on Anne Frank, one of TIME’s 100 People of the 20th Century)

Yet Hazel and Augustus will live in film lore because of the young actors who play them. Woodley, who graduated from supporting roles (George Clooney’s rebellious daughter in The Descendants) and indie leads (the bo0kworm in The Spectacular Now) to her own YA movie franchise (Divergent), has the gift of acting internally: she makes you watch her watch something, lets you read the mind of her character like a good book. Often photographed in dermatological closeup, Woodley’s face is its own engrossing movie — an autumnal symphony of darker and lighter browns. She makes Hazel the ideal narrator and receptive audience to Augustus’ agreeable showmanship.

Elgort, who can also be seen as Woodley’s brother in the Divergent films, has a natural screen appeal and suave chemistry with Woodley. He could almost make smitten girls in the audience think it would be worth getting cancer to meet such a paragon. And though you know that Fault, like Love Story, is bound to have a body count, the symbiosis of these stars is so strong, you’ll wish there could be a sequel. 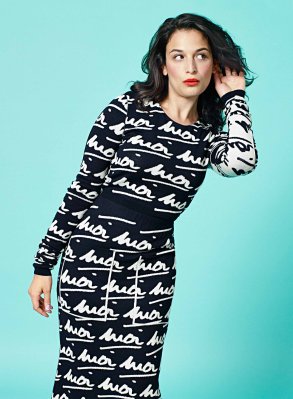