Susan Rice Is Under Fire Again

Today is an anniversary of sorts for Susan Rice, though she may not be enjoying it.

It was one year ago today — June 5, 2013 — that Barack Obama named Rice as his new National Security Adviser, instantly making her one of the most powerful figures in Washington, and maybe the world.

But the heady promotion was borne of crushing disappointment. A few months earlier Rice had been Obama’s planned choice for Secretary of State, to replace the departing Hillary Clinton. But in December 2012, Rice withdrew herself from consideration for that job in the face of furious conservative opposition. In the fall of 2012, Republicans had fixated on Rice after her now infamous Sept. 16, 2012, tour of the Sunday talk shows — in which she recited Administration talking points about the Benghazi attacks that proved inaccurate, though there was no evidence Rice herself had either shaped the message or known that its emphasis on the role of an anti-Muslim Internet video might be misleading.

Now Rice is again under fire for a Sunday performance — this time thanks to one simple phrase, uttered amid the White House’s early explanation of the deal to free the captured American soldier Bowe Bergdahl. Appearing on ABC’s This Week on June 1, Rice was asked about reports that Bergdahl had deserted his post and whether he would be punished for it. “He served the United States with honor and distinction,” Rice said.

As questions about Bergdahl’s honor swiftly mounted in the following hours, however, one could virtually hear a conservative cry of “Release the hounds!”Rice hadn’t just fueled suspicions that the White House had oversold the Bergdahl deal — she had once again made herself part of the story and rekindled smoldering embers of resentment over her Benghazi role. Republican Senator Lindsey Graham of South Carolina, one of Rice’s main antagonists during the Benghazi furor last fall, has now called for her resignation, saying “I can’t believe anything she tells me.”

The media has been quick to amplify the criticism. On Wednesday, FOX News White House reporter Ed Henry described a new “credibility problem for the Administration, in which Susan Rice was again pushing a false narrative.” On MSNBC’s Morning Joe the same day, co-host Mika Brzezinski marveled, “Why would Susan Rice be sent out, Susan Rice, be sent out repeatedly to say he served honorably and really push that as one the fundamental reasons behind this swap?” And with typical nuance, FOX’s Bill O’Reilly declared Rice “a moron.”

At first, Rice’s colleagues didn’t exactly back her up. The day after her ABC appearance, senior White House officials — including press secretary Jay Carney and even Rice’s deputy, Tony Blinken — declined to endorse the “honor and distinction” phrase. A former senior Obama Administration official who dealt with national-security matters says that’s no surprise, predicting earlier this week that Rice “will regret” her comments.

But a day later, Carney told CNN that Bergdahl’s volunteer military service “takes honor and is a mark of distinction.” And in an interview with TIME, National Security Council spokesman Patrick Ventrell made no apology for his boss, who is traveling in Europe with Obama this week. “She has kept her head down, but when she needs to stand up and defend a controversial decision the President makes, she’s not going to be afraid to do it — and she’s not going to apologize for it,” Ventrell says.

To the contrary, Obama officials imply that it may be Rice who is owed an apology. “She sort of brings out this craziness in a certain crowd,” says one Administration official. “If something is taken a half-notch out of context, it’s calls for her resignation and vicious ad hominem attacks against her.”

“I’m not here to suggest it’s because she’s a woman or a minority or what it is,” the official continues. “But other principals in the national-security team don’t come under this kind of attack.”

The official also offers no regret over Rice’s choice of words, saying, “I think she’d do it the same way” if given another chance. The official notes that the circumstances of Bergdahl’s capture remain unclear, adding, “We’re not going to throw this young man under the bus without any facts.” Rice may speak again publicly on the issue soon.

There’s no reason to think Rice’s job is in danger. She is personally close to President Obama, who personally resented her hazing over Benghazi — “I deeply regret the unfair and misleading attacks,” he said at the time — and rewarded her with a job that may be less visible but is more influential than the Foggy Bottom post she originally wanted.

It’s also a brutal grind, even when Rice isn’t personally under fire. Two days after she officially took the job last July 1, Egypt’s government was overthrown in a coup. Since then Rice has managed an almost nonstop series of crises, from chemical weapons in Syria to last summer’s terror alert to Vladimir Putin’s seizure of Crimea. Clear successes have been hard to find: “We are trying to put points on the board,” she told the Associated Press last week.

She has also had to contend with critics mounting a more substantive case against her — namely her role in overseeing America’s cautious policy toward Syria, where Obama has rejected proposals for greater U.S. intervention. They note that, after serving on the State Department’s Africa desk when the Clinton Administration failed to act to stop the 1998 Rwandan genocide, Rice described herself as a changed person a few years later:

“There was such a huge disconnect between the logic of each of the decisions we took along the way during the genocide and the moral consequences of the decisions taken collectively,” she told then journalist Samantha Power (who would succeed Rice as Obama’s U.N. ambassador). “I swore to myself that if I ever faced such a crisis again, I would come down on the side of dramatic action, going down in flames if that was required.” Syria today does not amount to a genocide, and the Rwandan horror was arguably far more preventable than the violence in Syria. Still, an estimated 162,000 people have died in Syria — more than 60,000 of them since Rice began managing U.S. foreign policy. Just last month, Obama’s ambassador to Damascus, Robert Ford, resigned because, he now says, he could no longer defend Obama’s risk-averse policy there.

“The humanitarian situation [in Syria] is appalling,” Rice herself told PBS’s Charlie Rose last week, adding that it “wrenches every human heart.” But she had little to offer in terms of new policy beyond an assurance that the U.S. is now “coordinating and cooperating in a much more effective way” with regional allies — and no hint of dissent with President Obama’s largely hands-off policy.

So don’t expect Rice to go down in flames anytime soon — either over Bergdahl or Syria. But it might be a while before you see her back on a Sunday talk show. 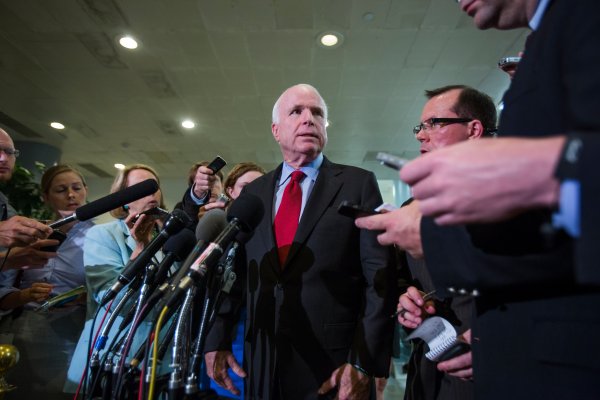