Of all the questions swirling around the Sgt. Bowe Bergdahl case, this may be the most explosive: Did President Barack Obama cut a deal with terrorists?

The White House insists the answer is no. But Republican critics aren’t satisfied.

“He was not a prisoner of war, he was with the Haqqani network, which is a terrorist organization,” Michigan Rep. Mike Rogers, the Republican House Intelligence Committee chairman, said Monday on MSNBC. That’s why Rogers accuses Obama of violating a stated—if not always observed—U.S. policy of not negotiating with terrorists.

The dispute between the Obama White House and its conservative critics hinges on three key questions: Who were Bergdahl’s captors? Who did the U.S. negotiate with? And was Bergdahl a hostage—or a prisoner of war?

The answer to question one is that Bergdahl was, as Rogers said, held by the Haqqani network— a militant group based along the Pakistan-Afghanistan border that has mounted attacks against NATO forces for years. Haqqani leaders spoke openly to western media outlets about his captivity, and the New York Times and other outlets have described them as his captors.

Obama officials don’t usually mention the Haqqanis. They generally say—as does White House press secretary Jay Carney—that Bergdahl was held by “the Taliban.” When White House National Security Advisor Susan Rice was asked on CNN Sunday whether Bergdahl was held by the Haqqanis, she didn’t respond directly—saying only that “he was being held by the Taliban.”

But “Taliban” is a broad term which describes several distinct factions, of which the Haqqani network is only one. According to the Institute for the Study of War, “the Haqqani network is officially subsumed under the larger Taliban umbrella organization led by Mullah Omar and his Quetta Shura Taliban,” although the group maintains its own independent command structure and operations.

Why do Obama officials prefer to talk about the Taliban over the Haqqanis? Perhaps one is an official terrorist organization and one is not. In September 2012 Secretary of State Hillary Clinton approved an official U.S. State Department designation of the Haqqani network as a foreign terrorist organization. The Afghan Taliban has not been so designated. The Haqqanis are unpalatable for another reason: they keep close ties to al-Qaeda.

Given that Bergdahl was held by an officially designated terrorist group, doesn’t it follow that Obama negotiates with terrorists? Not exactly. The U.S. bargained the release via the Persian Gulf nation of Qatar, which served as an intermediary. “We appreciate the support of the government of Qatar in facilitating the return of our soldier,” White House national security council spokeswoman Caitlin Hayden tells TIME. “We did not negotiate with the Haqqanis.”

Which brings us to question three: ransom or prisoner exchange? Obama officials argue the latter.

“An exchange of prisoners is normal in armed conflict, and this is separate and distinct from our policy on not offering concessions to hostage takers,” says Hayden. “Sgt. Bergdahl was not a hostage, he was a member of the military who was detained during the course of an armed conflict. The United States does not leave a soldier behind based on the identity of the party to the conflict … It was a prisoner exchange. We’ve always done that across many wars.”

Of course, Afghanistan is an unusual war. The Afghan battlefield has featured a complex mix of local fighters battling for control of their country and radical ideologues, some from other countries, motivated by hatred of the west. In some ways it is a non-traditional front in what was once known as the global war on terror. The U.S. has long justified its detention of prisoners at Guantanamo without trial on the grounds that they are “enemy combatants” not subject to traditional rules governing prisoners of war.

Even so, there’s a strong case behind the White House position: Bergdahl left a military base in an obvious war zone and wound up in the hands of an armed group that has conducted major attacks on NATO forces in Afghanistan. His capture and release has little in common with extremist kidnappings for ransom of westerners around the world.

The State Department may consider the Haqqanis a terrorist group—although experts say it has no ambition to harm Americans outside of the region—but Hayden’s argument suggests that the context of an armed conflict would supersede that status anyway. In other words, if a terrorist group captures a soldier on a battlefield, the rules of war apply—not the rules of counterterrorism.

It’s not a simple answer, nor will it satisfy the likes of Mike Rogers. But even Rogers admits that he would have sought a better bargain for Bergdahl’s release, which he said came at too high a cost. In doing so, he implicitly endorses negotiating with an enemy he considers to be a terrorist group. Which is understandable. The alternative—leaving captive U.S. soldiers to their fate—is awfully grim. 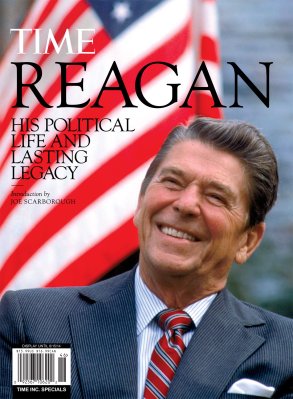 Why the Tea Party Forgives Reagan’s Sins
Next Up: Editor's Pick