The Origins of Slender Man, the Meme That Allegedly Drove 12-Year-Olds to Kill

A pair of 12-year-old girls allegedly tried to stab their friend to death Saturday, apparently to prove their loyalty to an Internet urban legend known as “Slender Man.” Following Monday’s initial court proceedings, in which one of the accusers conceded her actions were “probably wrong,” many people have been left wondering about the Internet meme that led two girls to attempt to kill their friend.

Slender Man is an urban legend who was born and bred on the Internet. The thin and faceless figure was first created by Eric Knudsen — better known by his online persona Victor Surge — in 2009, according to web culture database Know Your Meme. Knudsen concocted the character as part of a “paranormal pictures” photoshop contest hosted on The Something Awful forums.

Knudsen and others who embraced the Slender Man mythology crafted it as a mysterious, suited creature with a lanky form, tentacle arms, and propensity to stalk and torment seemingly random children. Slender Man’s victims are often portrayed as being plagued by a “Slender sickness”—resulting in paranoia, nosebleeds, and nightmares—before taken to the woods to be murdered.

The Slender Man stories proliferate on various online forums. Slender Man is the subject of alternate reality games, wiki pages and numerous Slenderblogs. There’s also a series of YouTube videos that follow the Slender Man myth in Blair Witch-esque short films. The channel has 379,000 subscribers; the videos been viewed more than 73.5 million times. The legend has even inspired fan art and cosplay:

I just found out what slender man is wtf man I'm not gonna be able to go to sleep tonight 😰😰😰😰 pic.twitter.com/2hfXuy2NR6

The two accused pre-teens told police that they felt as if they had to “kill their friend to prove themselves worthy of him,” the Milwaukee Wisconsin Journal Sentinel reports. While one of the girls was surprised by the suggestion to kill, she was also “excited to prove skeptics wrong and show that Slender Man really did exist.”

The girls apparently found Slender Man lore on CreepyPasta, a site which encourages readers to spread creepy stories. CreepyPasta gave its condolences to the families in a statement Tuesday morning, but it argued that “most people don’t watch Hannibal and turn into serial killers.” 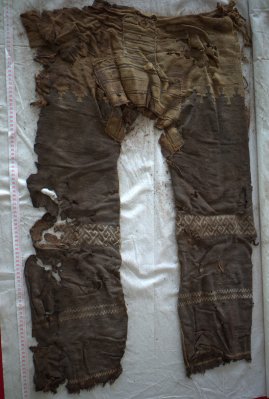 These Are the World's Oldest Pants
Next Up: Editor's Pick