FILE - In this June 13, 2013 file photo, Alex Beckers watches a presentation on the video game "Destiny" at the Activision Blizzard Booth during the Electronic Entertainment Expo in Los Angeles, June 13, 2013.
Jae C. Hong—AP
By Matt Peckham

If E3 2013 was about touting new platforms and software promises, E3 2014 is about putting paid to some of those vows. This is the point companies like Sony and Microsoft start to show their 2015 hands — and in Nintendo’s case, its holiday 2014 one — hoping to convince us that they have the coolest-sounding exclusives, or the most compelling upcoming platform features, or insert your buzz-phrase-of-choice here.

The following isn’t a comprehensive E3 rumor list, it’s just a collection of what we’re most likely to bump into (as well as not encounter), with a bit of context seasoned by my own biases.

Halos 1 through 4 in a single high-definition collection…

Engadget started this rumor last month, citing “sources” that claim Microsoft is planning a Halo 1-4 roundup, dubbed “Halo: The Master Chief Collection” and remastered in high definition to carry Xbox One fans through 2014 until Halo 5 arrives next year. I have no idea how reliable Engadget’s sources are, but the idea of replaying those first four installments back to back on Legendary difficulty, if only to reevaluate their craftsmanship, sits fine with me.

Halo 2‘s 10-year anniversary is this November, and Microsoft gave the original Halo: Combat Evolved the anniversary-edition treatment back in November 2011.

The game was just announced, and even though it’s a 2015 release, it stands to reason we might get our first peek at actual gameplay next week.

Nintendo president Satoru Iwata confirmed in May that the company was hopping into the NFC (near field communications) figurine business already staked out by Skylanders and Disney Infinity, adding that the figurines would be “compatible with video games starting from this year-end sales season.” So the chances these won’t show up at E3 in one form or another — hi there Super Smash Bros. for Wii U! — are probably nil.

The next Star Wars: Battlefront game we know about, so expect that. But Star Wars Episode VII (the J.J. Abrams-directed upcoming film) is underway now and due out December 2015. EA has exclusive license to make Star Wars-related games for the next 10 years, but the clock’s ticking, so it’d make sense to at least tease some of the other stuff that’s doubtless in the pipeline for 2015’s bona fide Star Wars-related freakout.

A glimpse of the next Mass Effect

I didn’t care much for any of the first three, and plenty of you cared even less for the trilogy’s finale, but I’m wide open to whatever’s next. BioWare Montreal director Yanick Roy confirmed the next Mass Effect was underway (and still untitled) early last month…

WRT name speculations: the next Mass Effect doesn't have a name yet, just a working title that we have used since day 1 of the project.

…so it’s not off the wall to hope we’ll get a peek at the game next week, though Roy later tweeted this:

@Flickamatuta I'm hoping we'll be able to reveal a tiny bit more soon, but we're not ready just yet

Why not? It’s already been announced (not with the “4,” but Sony confirmed Naughty Dog’s working on a PS4 Uncharted game ages ago). And with all the news about Naughty Dog staffers — including creative lead Amy Hennig — leaving the studio, Naughty Dog could use this E3 to mitigate worries that the next game is still a ways off (Uncharted 3 shipped back in 2011), or developmentally impacted by all those high-profile departures.

So sayeth a Japanese business newspaper, anyway. The timing makes sense: Capcom’s Resident Evil 6 was released in 2012, and Bethesda’s going to be showing off Resident Evil creator Shinji Mikami’s new survival horror game, The Evil Within, so there’s arguably incentive for Capcom to ante up with its next-in-series zombie-masher.

Hyrule Warriors, which stars The Legend of Zelda‘s iconic protagonist in a Dynasty Warriors riff, sounds interesting enough, and I’m guessing we’ll have a chance to give it a whirl at this year’s E3. But the game that players who love Nintendo and tune into trade shows like E3 most want to see is a proper new mainline Zelda action/adventure. Say what you will about Nintendo tilling plowed ground, it’s arguably incumbent on the company at this point and in light of Wii U sales to hand fans their first aperitif.

There’s also this cryptic tweet from Robin Williams’ daughter, Zelda Williams — named for the series — wherein she says she’ll be doing “something extra special” at this year’s E3:

Though she then followed that up with this smokescreen-like tease:

This one’s no longer a rumor, and therefore a shoe-in.

And that reality won’t include the Wii U’s successor at E3 2014. The Wii U’s in trouble, but even if we assume it’s going to have a shorter lifespan, it’s smack in the middle of its first-party software cycle, a cycle from which we’re still anticipating next-gen riffs on Mario, Zelda and Metroid. Introducing a new Nintendo console this early along would be madness — a Wii U sales-killer. Who’d pay $300 for Nintendo’s beleaguered Wii U today, with its still-smallish library of new games, if Nintendo publicly formalized plans to surpass it in a year or two? This one’s just common sense. That, and the Wii U’s story isn’t over: Nintendo’s brand power is undiminished, and finishing third doesn’t mean you’ve failed if you finish profitably.

Bear in mind that the Steam (and soon, mayhap, Steam Machines) magnate has never formally (or informally) announced, talked about or even much alluded to a third Half-Life. It’s taken for granted that the series doesn’t end with Half-Life 2: Episode Two, and an “Episode Three” was at one point on the books to be the final part of a once-confirmed trilogy (to conclude by Christmas 2007). But when the latter didn’t happen, and in view of Valve’s reticence about further sequels, wishful thinking’s led to a lot of speculative nonsense.

The latest involves a former Valve employee who, in an otherwise unrelated recent Twitch interview, said something that if you’re not paying close attention might be misconstrued as confirmation that work on a new Half-Life game is underway. But if you parse what the ex-employee actually said, you realize nothing was really said at all, and thus there’s no reason to think any more about the series’ existentially indeterminate status than before those words were uttered.

As for what might occur at E3, anything’s possible, but Valve’s not on lists of confirmed show vendors, and since they tend to do whatever they want, whenever they want, independent of conferences and trade shows, it’s more likely that we’d see a new Half-Life unveiled (if those stars and planets ever align) at a Valve-led media event.

Rockstar doesn’t generally do E3, so like Valve, any new game announcements — say a sequel to Red Dead Redemption, or souped-up versions of Grand Theft Auto V — are almost certain to happen outside the show (if those two in particular happen at all).

Parent Take-Two said in a mid-May earnings call that Rockstar would debut a new game in its current fiscal year (which ends March 2015), but that’s all anyone knows.

Bethesda PR poobah Pete Hines said no (in so many words), so that’s that:

@iTz_Reaper 1) I don't reallly pre-announce our announcements. 2) BGS will not be talking about its next game for a long time.

Oculus VR’s Rift, Sony’s Project Morpheus and others are sure to try their level best to prove that VR’s more than hype, or for more than enthusiasts willing to cavort with bulky hardware on their heads, or not just a time-stream-hopping novelty echoing a fad that wasn’t ready for mass consumption in the 1980s and may still fall short of that hope — multibillions backers or no — today.

Come on, Reddit, you want something smaller than the current model? What for? The PS4’s already a PS4 slim. But if we’re shooting the moon, I’d be a trifle happier with a version that didn’t have those two inscrutable pieces of plastic on the underside, the ones that make the system sit unevenly on a flat surface if you position it horizontally in lieu of using the vertical stand. (That, or give me the same case with cooler internal processors and/or a quieter cooling fan.) 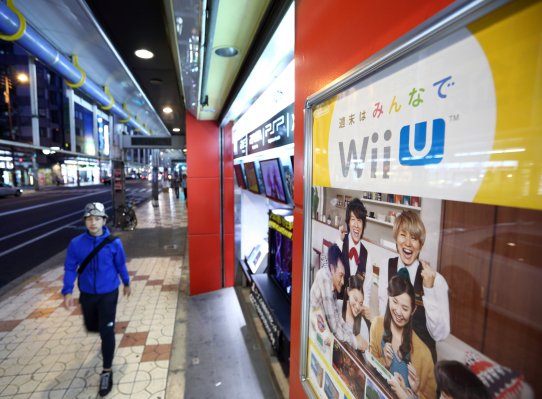