A woman holds up a three fingered salute during a protest against the Thai military coup at Terminal 21, a popular shopping mall in Bangkok, on June 1, 2014.
Jack Kurtz—Zuma Press
By Charlie Campbell

If life does imitate art, Thais may have reason to worry. The Southeast Asian nation’s ruling junta is pondering whether to officially ban the three-fingered “District 12” salute from The Hunger Games, now that is has become an emotionally charged symbol of resistance among opponents of the May 22 military coup.

Already, scores of those proffering the salute during weekend street protests have been dragged off by troops, in scenes eerily reminiscent of the Suzanne Collins novels and movie franchise, which depict a dystopian future society ruled by the totalitarian Panem regime.

Thai army deputy spokesman Colonel Winthai Suwaree told the Bangkok Post that the military top brass are discussing how best to respond to the barbed gesture. “[The junta] must look at [the protester’s] intention, what they want to communicate and surrounding circumstances,” he said.

Thais have reason to be apprehensive. In May 2010, more than 90 people were killed, and 2,000 injured, during a military crackdown on protesters demanding the return of a popularly elected government removed by a putsch four years before.

And over the weekend, the sight of unarmed and peaceful protesters being detained for flashing three fingers — including a woman dragged into a taxi by plainclothes police in tourist-thronged central Bangkok — did little to assuage fears of what the military may have in store.

Brad Adams, director of Human Rights Watch’s Asia division, calls the Hunger Games salute “a symbolic act of peaceful defiance” amid a situation that “is spiraling downwards in terms of rights abuses.”

“The fact that the [junta] is closing down sections of the city to chase a handful of protesters reveals a totalitarian mind-set that discounts respect for human rights as a hindrance, and sees youthful defiance as the enemy,” he said by email.

According to the junta, transgressors of martial law deemed violent, or those who resist or obstruct security officials, will face prosecution in a military court. Arbitrary detention for up to one week is in effect, even for peaceful protests. Panem would be proud. 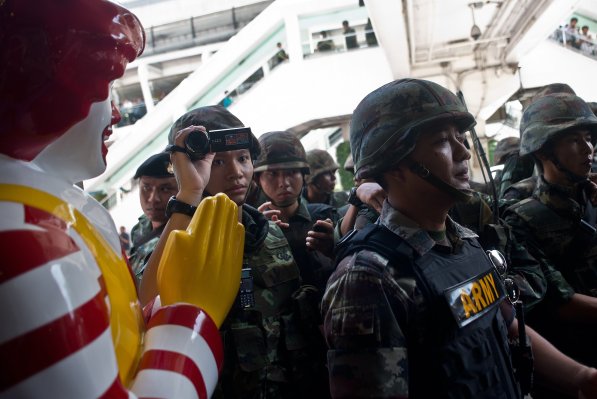 McDonald's to Thai Protesters: Lay Off the Golden Arches
Next Up: Editor's Pick