The Winding Road to D-Day

It was, Winston Churchill noted at the time, “a strange Christmas Eve.” Only weeks after the Japanese attack on Pearl Harbor and the subsequent German declaration of war on the U.S., Churchill crossed the Atlantic aboard the H.M.S. Duke of York for conversations with Franklin D. Roosevelt in December 1941. Eleanor Roosevelt was asked to lay in stocks of brandy, champagne and whiskey (Churchill brought his own cigars); the work at hand was to be all-consuming. “Almost the whole world is locked in deadly struggle,” Churchill said during the lighting of the National Christmas Tree, “and, with the most terrible weapons which science can devise, the nations advance upon each other.” The issue before Churchill and FDR was the most fundamental of all: how best to wage a world war against the Axis powers.

During the discussions, British and American officials affirmed the earlier product of joint staff talks. Code-named ABC-1, the military conferences, held in Washington in the first months of 1941, had asserted the primacy of defeating Germany first. The other potential global foe, Japan, would be taken on only secondarily. With his industrial might and Continental base, Adolf Hitler was viewed as the predominating opponent whose defeat the Anglo-American alliance would come to see as the common cause.

On the 70th anniversary of Operation Overlord, the amphibious assault on Nazi-occupied Europe, we understandably celebrate the Normandy landings as the central act of the 20th century; what Churchill called “the most difficult and complicated operation that has ever taken place” is one of the great hinges of history. Yet the road to the opening of the Second Front in northwest Europe was by no means a simple one. The story of D-Day is as much about years of diplomatic skirmishing among Churchill, Roosevelt and Joseph Stalin as it is about the landings themselves on the beaches where President Obama and other world leaders will gather this week. And in that convoluted tale lies a lesson in leadership, for FDR’s patient maneuvering in 1941, ’42 and ’43 was that of a President at once constrained and determined as he sought the right answer in the calamitous times. What seems straightforward in retrospect was, in real time, highly improvisational—­and at moments, dare we say it, Franklin Roosevelt led from behind.

As 1942 began, several key American figures—­notably Army Chief of Staff George Marshall and General Dwight Eisenhower—argued for a predictably American strategy. If the target were Germany first, they argued, then hit Germany first, hard and quickly. The fastest way to relieve the immense pressure on Stalin was to cross the English Channel in 1942. There was a problem, though: Winston Churchill.

The Prime Minister was averse to a large-scale strike against Germany for at least two reasons. The first was biographical. As First Lord of the Admiralty during World War I, Churchill had presided over the disastrous Gallipoli strategy that killed 28,000 British soldiers in the ill-considered invasion of Turkey. The experience crushed him. (Afterward he resigned from the government and led an infantry battalion at the front in France.) As scholars have long noted, the second reason was his tendency to prefer secondary operations on the periphery of Hitler’s empire, in the hopes of weakening the enemy at less cost and—though this was and is much disputed—placing British troops in position to protect colonial and postwar interests.

Stalin, for his part, wanted a Second Front in Europe not today, not tomorrow, but yesterday. And so Roosevelt found himself in the midst of a push-and-pull between London and Moscow. Churchill carried the day for 1942 and ’43, arguing for other operations and suggesting that there were not yet sufficient resources to mount a successful attack on the French coast. As much as FDR wanted to take the direct route across the Channel, he at first sided with Churchill against Stalin, approving a Mediterranean strategy.

For Roosevelt the hour of decision came at Tehran in November 1943. Stalin pressed and pressed for a cross-Channel operation, and Churchill, while always agreeing in principle, managed to raise a seemingly infinite number of reasons to delay. Stalin spoke starkly: Were his Western allies truly with him or not? Roosevelt then made his choice, insisting on Overlord and overruling Churchill. The industrial might of America had by now built a huge war machine; the men were trained; and in that moment in the Tehran autumn, the new world of competing superpowers, with Britain in a subsidiary role, came into being.

Roosevelt was right to make the call he made at Tehran, which led to Overlord in June 1944; Churchill was also right early on in resisting a hasty cross-Channel operation. “It is fun to be in the same decade with you,” Roosevelt once told Churchill. For the rest of us, it was more than fun. As the triumph of Overlord proved beyond doubt, it was providential. 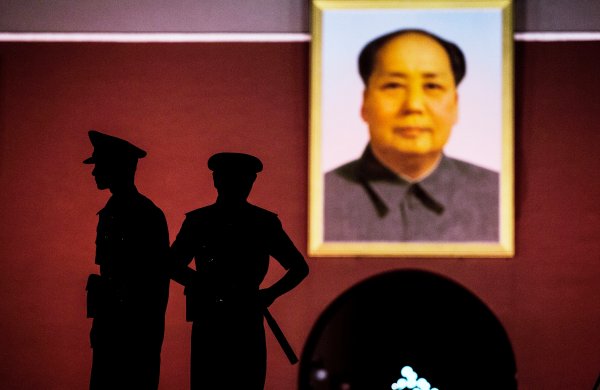 Tiananmen at 25: Amid a Crackdown on Dissent, Young Chinese Take Action
Next Up: Editor's Pick