US WWII veteran Edward W.Oleksak, who landed on June 6, 1944 in Omaha Beach, poses in front of the statue ''Les Braves'' by French sculptor Anilore Banon, on June 2, 2014 in Omaha Beach, near Saint-Laurent-sur-Mer.
Joel Saget—AFP/Getty Images
By Vivienne Walt / Paris

It has been a long goodbye. And this week, the world might be saying its last big farewell to what’s been dubbed “the greatest generation,” those who fought in World War II, and especially in its most pivotal battle of D-Day on June 6, 1944. This raises profound questions for veterans and historians about how future generations will remember the event, when there are no survivors left—and more crucially, how to make sure they will care.

For the 70th anniversary of that momentous fight, hundreds of those still living who took part in the mammoth D-Day sea invasion of Nazi-occupied France are converging on the beaches of Normandy all week, to mark the largest amphibious landing of the war—indeed, of any modern war. The D-Day invasion broke the German occupation of Europe, finally liberating the horrifying Nazi concentration camps and ending the conflict that left much of Western Europe (including Normandy) in physical and economic ruin. The invasion force that week in 1944 consisted of a giant armada of about 5,000 warships, 54,000 vehicles and 300,000 soldiers, from the U.S., Britain, New Zealand and several other countries, who staggered ashore, and then fought their way through Normandy, village by village, crushing or driving back the German platoons in their path under heavy aerial bombardment, in a vicious three-month battle.

As they have every five years on June 6, world leaders will gather on Friday at Normandy’s war cemeteries to honor tens of thousands of fallen soldiers, including thousands of Germans, who lie buried along the French coastline of the English Channel. In all, about 100,000 soldiers on both sides, and about 20,000 Normandy citizens, died in the battle. Dozens of villages are marking this week with photo exhibitions, veterans’ gatherings, fireworks, and military fly-pasts, including from hundreds of U.S., British and Russian forces, who will jump from World War II-era planes on to the beaches.

President Barack Obama is scheduled to wrap up his three-day European trip to Warsaw, Brussels and France with a wreath-laying ceremony on Friday morning, together with French President François Hollande, at the U.S. war cemetery in the tiny village of Colleville-sur-Mer—the burial site for 9,387 young Americans, most of whom were just teenagers in June 1944, and whose names are now marked with rows of simple white crosses or Stars of David. On Friday, Obama and Hollande will join leaders from those countries who fought the Nazis in an international ceremony on Normandy’s Sword Beach, in the village of Ouistreham. In a day likely to be overshadowed by tensions over Ukraine, Russian President Vladimir Putin will take part, commemorating Russia’s heavy loss of life against German forces. And in a sign of Europe’s postwar unity, the ceremonies also honor about 23,000 young German soldiers killed in Normandy in 1944, with Chancellor Angela Merkel and many German veterans attending.

Though the cemetery scenes will closely resemble previous big D-Day anniversaries, this one will be far more poignant, for one reason: It is the last time veterans will be there in any significant number.

Dwindling fast, the comrades-in-arms of those killed are now in their late-eighties and early-nineties. For days, they have been arriving in Normandy, hobbling on canes or pushed in wheelchairs in cemeteries, their hands shakily placing flowers on the graves. Dressed in their World War II uniforms, they are acutely aware that it is likely their final visit—and in many cases, it is their only visit. While Hollywood has memorialized their courage many times, including in Tom Hanks’ hit movie Saving Private Ryan and the TV series Band of Brothers, the survivors will no longer be around to tell their stories.

D-Day veterans say they fear that as their generation fades, so too might the interest in their experience. “I know very well that for the 80th anniversary, I might not be there, and I am afraid people might forget the war, and the misery it brought,” Bernard Dargols, 94, a D-Day veteran in the U.S. Army, said while sitting in his apartment outside Paris on Saturday. “The one reason I am asked to tell my story is that there are so few of us veterans left. I didn’t read these things in books. I was there.”

Dargols, a Paris-born Jew, immigrated to the U.S. in 1938 to work for a sewing-machine distributor in Manhattan, became a U.S. citizen, and landed on Normandy’s Omaha Beach six years later as a U.S. Army staff sergeant, as part of the D-Day armada. As a native French speaker, he became a crucial U.S. intelligence agent, able to sneak into Norman villages to pinpoint German positions and determine on which roads the enemy forces had laid landmines. In 2008, Normandy officials named a road after him.

Dargols says he had badly wanted to fight the Germans, after seeing newsreel footage in a Manhattan movie theater of Adolph Hitler shaking hands with the French leader Philippe Pétain, whose government collaborated in deporting about 73,000 Jews from France to the Nazi concentration camps. Many of Dargols’ relatives and friends died in the camps, although his father and two brothers escaped to New York during the war. His mother survived the Nazi occupation of Paris by hiding in her apartment building—a fact Dargols learned only in 1944, when, as an American G.I., he drove his Jeep into the courtyard underneath the family apartment, after Paris’ liberation, and found his mother alive. He later moved back to Paris. Seventy years later, Dargols says he still recalls the intense terror he felt during the D-Day invasion, as he came ashore under a heavy barrage of bombs, with only minimal military training, and not a day’s combat experience. “I was very scared,” he says.

Perhaps because of Hollywood’s depiction, many Americans now regard D-Day and the battle for Normandy as one they were sure to win. But at the time it was an immense gamble, as U.S. General Dwight Eisenhower warned young American soldiers in a radio address before they boarded the D-Day ships on the English coast. “Your enemy is well trained, well equipped and battle hardened,” Eisenhower told them. “He will fight savagely.” Bad weather had forced Eisenhower to postpone the D-Day invasion one day, and further delays could have forced a long postponement, possibly prolonging World War II for another year. “Eisenhower’s decision to go on June 6 was one of the bravest decisions of the war,” says British war historian Antony Beevor, author of “D-Day: The Battle for Normandy.” Beevor says the German forces were disciplined and strong, more tham many U.S. and British soldiers.

The D-Day story has been simplified in other ways too, including glossing over many of the tensions between then-President Franklin D. Roosevelt and Britain’s wartime Prime Minister Winston Churchill. Churchill worried that central Europe might be left in Communist hands, if the Red Army was allowed to advance during the Germans’ collapse, and argued—in vain—for the U.S. to invade Europe also through Italy, in order to stop the Soviet advance. “The U.S. didn’t understand the implications of the post-war period,” Beevor says. “As far as the Americans were concerned, they wanted to get the war over and done with.” In the end, Churchill was proved right.

But 70 years after D-Day, one fact remains, says Beevor: The war was for many Americans the last great moral combat. “The reason why World War II has such a powerful influence on our imagination is because the moral choices were so great and important,” Beevor says. “That’s the most important lesson for younger generations.”

And at least for now, veterans like Dargols are here to teach it.

Correction: The original version of this story misstated the number of warships involved in the invasion armada. It was an estimated 5,000 ships. 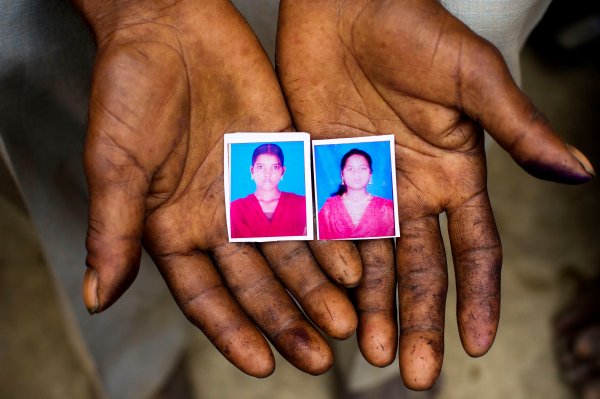