As my colleague Michael Grunwald points out, the Environmental Protection Agency’s (EPA) proposed new rules on carbon emissions from the power sector are a big deal. (Vice President Joe Biden might use slightly different language.) The rules—which still have to go through a year of public comment and which will almost certainly face legal and Congressional challenges—would cut carbon emissions from the power sector by 30% below 2005 levels by 2030. These regulations—which will apply to existing power plants, not just new ones—are by far the biggest single step taken by the U.S. to fight climate change. With the stroke of a pen (though it was technically be EPA Administrator Gina McCarthy’s pen), President Barack Obama has done more about global warming than all of his predecessors combined.

But climate action is measured in carbon, not in political legacies. By that measurement, the U.S. carbon regulations are only a beginning, and will only have lasting benefit for the world if they help encourage the major future emitters—the big developing nations like China and India—to take similar steps to reduce their own rapidly growing carbon emissions.

The truth is that the EPA regulations are so historic largely because so little has been done to restrict carbon emissions before. As Eric Holthaus points out over at Slate, choosing 2005 as the baseline year for carbon cuts makes it that much easier for the U.S. to meet a 30% cut. (In a call with reporters, senior EPA officials made the case that 2005 is less a baseline than a point of comparison for the changes that will be made in emissions by 2030. The actual policy, which will be left to individual states, flows from the energy mix in the U.S. as of 2012. But 30% less than 2005 levels sounds a lot more impressive than a smaller percentage from 2012 levels, even though they ultimately mean the same thing.) That’s because U.S. carbon emissions have already fallen significantly since 2005, thanks to a mix of increasing natural gas (which emits around half as much carbon as coal), a growing contribution from renewables and the recession, which reduced consumption of everything, including energy. As of 2011 carbon emissions from the power plant sector alone—which accounts for a little less than 40% of total U.S. greenhouse gas emissions—had fallen 16% since 2005, which means we’re already more than halfway there. Using 1990 as a benchmark year for emissions—which is what’s done in the UN climate process—the EPA regulations only amount to a 3.5% cut by 2020.

In fact, given that U.S. power plant emissions had been dropping, the reductions mandated in the regulations are likely much smaller than they seem. The EPA itself estimates that emissions from U.S. power plants will be 730 million metric tons less by 2030 than they would have been without the rules. That’s not a negligible amount—it’s equivalent to taking two-thirds of the country’s passenger vehicles off the road for a year—but it still amounts to just about 11% of total U.S. greenhouse gas emissions in 2011. The EPA predicts that by 2030, coal and natural gas will still be the leading sources of U.S. electricity, each contributing 30% of power, with non-hydro renewables coming in at 9%, up from about 6.7% now. It’s impossible that anything tougher would have been politically feasible—witness Republican House Speak John Boehner’s two-word reaction to the news rules: “It’s nuts.” Still, if everything the EPA predicts comes true—obviously not likely—the U.S. of 2030 will be a cleaner, healthier place, but it will still be pouring a lot of greenhouse gases into the atmosphere.

And even that may not matter all that much to the global climate. That’s because the U.S. has already been outpaced as the world’s top emitter by China, where carbon emissions have increased an astounding 52% since 2005. Rising India isn’t too far behind—carbon emissions have grown 50% since 2005. These giants, and other rapidly growing countries in the developing world, will be putting the vast majority of the new carbon into the atmosphere in the decades to come. The amount of carbon set to be saved by the EPA rules amounts to a little over 2% of total global carbon emissions in one year: 2012. It’s still China and the other big developing nations that control the future of the climate.

But that doesn’t mean U.S. action can’t make a difference—as much by example as by actual numbers. The EPA regulations should allow the U.S. to reach the 17% reduction below 2005 that Obama promised during the doomed U.N. climate summit in Copenhagen in 2009. U.N. climate talks, which resume at the end of the year in Lima, have always been hobbled by the refusal of the U.S. to take the lead on cutting carbon, going back to the fact that Washington failed to ratify the Kyoto Protocol. Representatives from Beijing and New Delhi could—and did—argue that it was unfair to expect still poor countries to cut carbon if the world’s top historical emitter refused to take action. But U.S. diplomats will now be able to point to EPA regulations as proof that the U.S. has pledged itself to long-term carbon cuts—and cuts that come under national law, not more amorphous international promises. “American influence is always stronger when we lead by example,” Obama told graduating West Point cadets in an address last week. “We cannot exempt ourselves from the rules that apply to everyone else.”

That doesn’t mean the dream of a global climate deal has been saved. The reality is that the future of climate action will look like this—national or regional entities taking steps on their own, for their own reasons, that will hopefully add up to something real. China is already taking aggressive steps on carbon, less to deal with climate change than to counter the truly horrific air pollution the country faces. Beijing will continue on that path to save itself, but U.S. leadership can’t hurt. “I fully expect action by the United States to spur others in taking concrete action,” said Christiana Figueres, the U.N.’s top climate official.

We’ll see. But here’s my prediction: The policies put in place in Washington or Beijing or New Delhi will ultimately matter far less than the technological changes that are already sweeping the energy industry. U.S. carbon emissions have fallen over the past decade—in the absence of national action—largely because of new technologies, including the fracking revolution, which made it economical for cleaner natural gas to displace dirty coal. In the years to come, solar panels will keep getting cheaper and cheaper, which could potentially upend the utility model, much in the same way that mobile phones disrupted landline companies. Big data will change how we use and produce electricity, reducing waste. Obama’s climate regulations will help cement those changes and encourage new ones as states mix and match to meet their emissions reductions goals.

But 2030 will look very different from 2014—and will almost certainly be much cleaner in the U.S.—for reasons that go far beyond a 626-page regulatory order coming out of Washington. 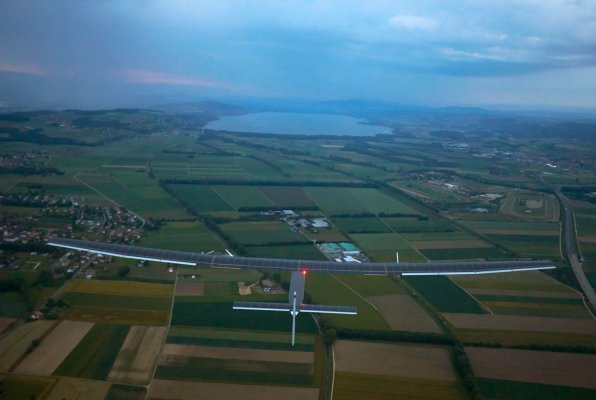 This Solar-Powered Plane Will Fly Around the World
Next Up: Editor's Pick