This undated photograph made available in a January 2014 report by the Carter-Ruck law firm, commissioned by the Qatari government, shows evidence of alleged torture and execution at the secret jails of Syria's president, Bashar al-Assad. It is part of an archive of 55,000 images said to depict 11,000 dead bodies photographed over the last two years and leaked to Syrian opposition forces by a Syrian military photographer.
Carter-Ruck—Anadolu Agency/Getty Images
By Aryn Baker

One of the most terrifying memories Bilal Ghalioun has of his two-year detention in a Syrian prison never happened directly to him. But the fear that it might turned his life, already plagued by daily beatings and torture with electrical shocks, into a nightly plea that God would take his life before he awoke.

Early on in his detention, Ghalioun, a movie-star-handsome 28-year-old plumber from Homs, witnessed a woman being tortured for information about a family member who had joined the uprising against President Bashar Assad. When she failed to satisfy her interrogator, he thrust her into the hands of a nearby guard, instructing him to, “let your men have fun with her.” The woman’s screams echoed through the barracks-like facility for hours after. A few days later, Ghalioun found himself in the same situation: unable to answer questions about the location of a cache of rebel weapons he had never seen. The same interrogator instructed the guards to have fun with him. So deep was his fear of rape that it was a relief when they just beat him with rubber hoses and metal rods. “We knew rape was happening, the worst was not knowing if it would ever happen to you,” he tells TIME, just a few weeks after his escape from one of Syria’s most notorious detention facilities, a military intelligence compound in Homs.

Homs has since been pacified through a series of ceasefires. And Assad, who is about to cement a third seven-year-term as President in elections that took place this week, is seeking to turn that victory into a popular mandate for finishing the war by any means possible. Short of major international military intervention on the side of the rebels, he is likely to be successful. Ghalioun’s story, told to TIME over more than three gut-wrenching hours in a Beirut coffee shop—the details have been confirmed by international human rights organizations—is a sobering reminder of just how brutal the Assad regime has been over the past few years, and how it’s likely to get worse as he attempts to consolidate power.

Ghalioun’s only crime was one of family relations. The apolitical second cousin of Burhan Ghalioun, a prominent member of the political opposition in exile, he says he never picked up a weapon, even as his neighborhood of Baba Amro in Homs collapsed under regime attack. He helped his parents run an ad-hoc medical clinic in their living room to aid residents who had been wounded in the fighting. But he was singled out for questioning, and then torture, in March 2012 because of his family name. “They wanted to know how the rebels were getting money from [the political coalition in exile].” Ghalioun says. “They wanted to know where the weapons were. They just didn’t believe that I didn’t know anything.”

For four months until he was transferred to Homs central prison, he endured ever more cruel tactics in an effort to get him to speak. “If I had known anything I would have said it,” he says. “I just wanted it to end.” His arms and legs were pulled through a car tire that was then rolled around the room while guards beat him with sticks in a gruesome version of the Victorian-era game of hoop trundling. He was hung by bound wrists from a hook on the ceiling and beaten. When he was finally let down, the plastic ties were so tight around his wrists that his guards removed them with a lighter, he says, as he shows the mottled scars. “There doesn’t seem to be any limit to the types and methods of torture that these people running the regime hellholes are willing to inflict on their detainees,” says Kristyan Benedict, Amnesty International’s Syria campaign manager. “From interviews with former detainees, it seems that techniques and cruel practices are becoming ever more inventive and inhumane.”

Ghalioun’s graphic descriptions of torture at the hands of the Assad regime are nothing new. Dr. Burhan Ghalioun, in confirming his second cousin’s account, remarked in an email, “This is well known, that this is a regime that uses torture systematically.” For years, activists and human rights groups have decried arbitrary detention and torture in prisons. Human Rights Watch issued a horrifying 2012 “Torture Archipelago” report on prison abuses. And a cache of some 55,000 digital photos recently leaked by a defected military police photographer that depicts the regime’s use of starvation and extra-judicial killing in detention on a scale not seen since the Holocaust, according to a prominent war-crimes prosecutor who examined the footage.

But the accounts of the regime’s routine use of torture, illegal detention and extra-judicial killings in government detention facilities, even those released by the United Nations High Commissioner on Human Rights, appear to have had little impact. Last week the U.S., France and 11 other members of the United Nations Security Council submitted a draft resolution that would refer the Assad regime to the International Criminal Court in The Hague for crimes against humanity. But the resolution was vetoed by Syrian allies Russia and China in a move that rewards impunity and opens the way for further acts of savagery, according to a group of independent United Nations human rights experts. “The failure to hold those responsible for the violations to account may fuel further atrocities,” they said in a statement released on May 30.

Rebel forces, too, are accused of torture in detention, but on a far less industrial scale. Nor are they representatives of a political leadership that purports to act on behalf of all Syrians. The Syrian government denies that it detains civilians, though it does refer to all those who oppose Assad as “terrorists” worthy of being targeted, killed and captured in the name of bringing stability back to Syria. Regime representative also hold that government forces do not use torture in interrogations. Ghalioun, who eventually managed to bribe his way out of prison in April and then escape to Lebanon, has the scars to prove that they do. If the account of one man, or those of the thousands of others interviewed for human rights reports over the past three years, is not enough, Benedict of Amnesty International fumes, then why doesn’t the Syrian government open its prison doors? “If the regime wants to say this isn’t happening, they shouldn’t block UN requests to enter their detention facilities. Clearly they have a lot to hide.” 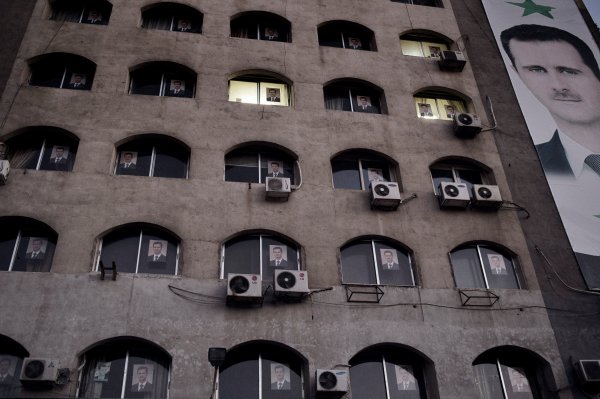 Vote Will Boost Syria's Assad
Next Up: Editor's Pick