China Fires Back at U.S. Criticism Over Asia-Pacific Instability

From left: U.S. Defense Secretary Chuck Hagel listens to Lt. Gen. Wang Guanzhong, China's deputy chief of General Staff during the start of their meeting on May 31, 2014 in Singapore.
Pablo Martinez Monsivais—Getty Images
By David Stout

Diplomatic platitudes took a backseat to tough talk in Singapore over the weekend, as Beijing slammed Washington for investing in a “containment fantasy” after the U.S. accused China of overseeing “destabilizing” maneuvers in the South China Sea.

On Saturday, U.S. Secretary of Defense Chuck Hagel laid into China for allowing a state-owned drilling rig to drop anchor in the heart of heavily contested waters off the Vietnamese coast. He was speaking at the annual Shangri-La Dialogue organized by the International Institute for Strategic Studies.

“We firmly oppose any nation’s use of intimidation, coercion, or the threat of force to assert these claims,” Hagel told the conference. “We also oppose any effort — by any nation — to restrict overflight or freedom of navigation, whether from military or civilian vessels [or] from countries big or small.”

Beijing did not take kindly to the forceful criticism.

“Hagel’s speech was full of hegemony, full of words of threat and intimidation,” said Lieut. General Wang Guanzhong, deputy chief of the general staff of the People’s Liberation Army, on Sunday.

“It was a speech to abet destabilizing factors to create trouble and make provocations. It was not a constructive speech.”

“Strengthened military alliance against China does not contribute to regional stability that the United States has touted for, but rather constitutes a provocative and hostile move that stirs up regional tension,” read an editorial.

This year’s Shangri-La Dialogue came at an increasingly hostile time in the region. Just four days before the meeting commenced, Hanoi accused Chinese vessels of sinking a Vietnamese fishing boat near the controversial oil rig in the South China Sea.

The incident was the latest flash point between the countries since the drilling platform entered waters claimed by Vietnam last month.

During a keynote address on Friday, Japanese Prime Minister Shinzo Abe offered to supply both the Philippines and Vietnam with patrol boats. Japan has its own bitter territorial disputes with Beijing.

“Japan will offer its utmost support for the efforts of the countries of ASEAN [Association of Southeast Asian Nations] as they work to ensure the security of the seas and the skies,” said Abe, according to the BBC. 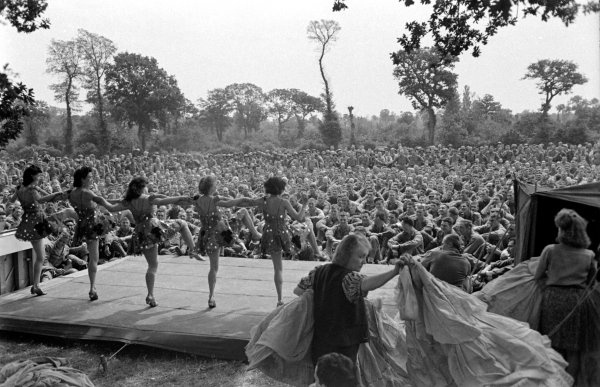 After D-Day: The First Show for US Troops
Next Up: Editor's Pick